My posts seems-to be morphing into a diary of time off art making, of wandering around its edges, of PV’s, outings…..

I am certainly in a fallow, sit back and ponder phase. It all feels very autumnal. My Protestant work ethic little voice in the head keeps squeaking that I am not working, not producing, not progressing my career.

I am telling it to shut up.

Ideas swim in and out and things catch my attention – old photos seem to be high on the list – I have an inherited album of a post war European tour. Gerhard Richter swamps my field of vision here though and I don’t seem to be able to get past him.

Nevertheless I do keep finding small sets of vintage photos in antique shops – obviously wrenched from old leather albums – and showing one family. They intrigue me these unknowns. Its the story telling aspect I think. Not sure how to tackle them and if I buy them I feel its a statement to mysef that I am not yet ready to fulfill.

Yesterday I went to the Hannah Peschar Sculpture Garden near Dorking. Two hours of peace and beauty. Great at this time of year; we had the place to ourselves and the duckweed had made some of the many ponds into extraordinary green silent otherworlds.

They will live in my memory longer than the work I think.

We met Hannah Peshar in the reception building – charming and chatty she has been building the huge ‘wild’ garden for 30 years. I do so envy people who have been able to dedicate their life to something like this….

So – green and dripping woods, magical ponds and other peoples black and white images…..

It all feels like overload and no straight line to a new body of work at present. But that’s ok for now.

On Tuesday evening Ros Barker and I attended a West Kent Reception for the great and the good. All dressed up and being very grown up we soon found we were the only arts related invitees and we were definitely short of a chain of office or an OBE. Still, we met some interesting people who seemed relieved to have the chance of a different type of conversation.

Tonight was the PV of ‘The Meeting Room: A Space for Minds to Meet’ – the new show in the Kaliedoscope Gallery in Sevenoaks.

‘The Meeting Room explores the meeting point between the physical and the metaphysical….’

In amongst some really lovely work were three drawings on Chinese paper: small but holding the wall they were hung on. A red line grid held endless downward black strokes within its squares. It had a stillness and a fascination ..each handmade stroke quivering with the life of different widths and darkness.

All the work of Clare Smith – who made the long trip from Dover to be there. Although feeling I had known her for ages through the a-n blog, we actually met for the first time tonight. 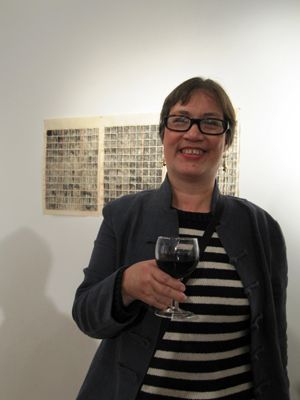 I am just putting my head back over the parapet having struggled to get to the stage when I could get to my blog.

Huge family party has taken all my energy and focus away from everything else. Finally getting to the stage when I have returned house/garden/ my psyche back to a semblance of normaility and have time to look back at the Telling Stories Private View – which happened in the middle of the madness…

A lovely evening [before the rains set in] which we needed as the evening was started by the arrival of the Urban Bikes which rode up from Hastings town to open the show for us.They continued to arrive during the evening – decked out with lights and soundscapes.It all felt inclusive and great fun. A great scene setter.

The event was massively well attended – at some points you could hardly move. So much so that I feel the need to go back and see the show again, in peace.

It was the first show where I hadn’t been involved in the hang in any way. Strange to come in and find your familiar work in an unfamiliar enviroment. Cathryn Kemp the TS curator and Sue the museum curator had hung the exhibition and it looked considered and classy. A show to be proud of.

Halfway through the evening Youmeni who is a Japenese performance artist danced for us in the darkness of the fabulous Dunbar Room. She told the story of the family kimono she was wearing, her exquisite movements speaking of searing emotion and pain. She must have been physically and emotionally exhausted.

Various speeches ensued but the Art Council England speech was amazing – he really got us a group and made a big point of saying he regarded TS as a standard of excellence. Can’t ask for more really.

So – show hung and PV done.

One of the TS artists has asked if I would like to join a new group of women artists considering world wide womens issues from a feminist viewpoint.

A great set of artists I would like to know better and maybe work with…another new door opens. Brilliant.

Have just got back from London having been on a evening tour of the College of Arms – at the opposite end of the Millenium Bridge from Tate Modern.

Maybe I could live in there?

Maybe they need a resident artist? 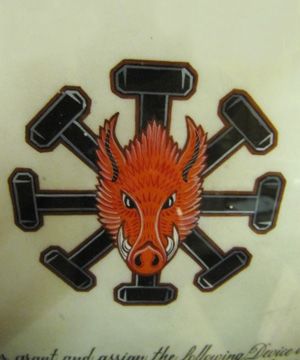 My previous blog seems to have sparked some discussion on gender difference. It followed a crit that I took part in during which the work offered was criticised for being ‘too emotional’.

Intrigued, I have mentioned it at discussions with various artist groups. Each time it seemed to ellicit an immediate response and has sparked some discussion in my comment box here too.

So – following David Minton pointing out he was short of information – here it is.

An image of the work in question is attached.

It is a broken vintage display box with a glass front containing a shoe sole and parts of shoe soles. These were beachcombed and are heavily textured with barnacles, salt crystals and age.

The work is monochrome. It is domestic in size and nature.

It was offered to the crit group with a title – ‘I Let Go your Hand.’

…and yes- the instigator of the original ‘too emotional’ crit discussion WAS a male artist but in my subsequent chats I hadn’t mentioned that; it was always just asssumed – which is interesting.

Listening to some in the crit group I got the feeling that clean, clear concepts and work were felt to be ‘correct’ and anything entering the realms of the poetic or dealing with the personal emotional [unless political or dark] was somehow suspect.

Relating this story has lead to other artists linking this to a patriarchcal overview they blamed on a currently male dominated art scene.

Personally I think the title may have something to do with it. Without the ’emotional’ title attached maybe the feedback would have been different?

My work is always linked to memory and memorial and often to a family history of loss in the Holocaust. I tend to work in museological formats; curating archivings of loss.

Titles are always a minefield.

In this case I felt very strongly that it had to be titled – although I wouldn’t go as far as revealing what drove me to make the work. I believe an audience needs the space to project on to a work. Probably my title has already stolen some of that space…..

Can a work be too emotional? I guess eventually it becomes a form of Kitsch.

Maybe it just means that the viewer has had an emotional response to it and dislikes the fact – maybe even feeling tricked into it in some way?

Are we as artists being set up to feel that ’emotion’ in work will in some way fail at the last hurdle of greatness and should therefore be avoided? That it is a weakness and not a strength in a contemporary piece of art.

If so – is this coming through the curators, funders, arts officers?

I doubt it comes through the gallerists. Emotion always sells. 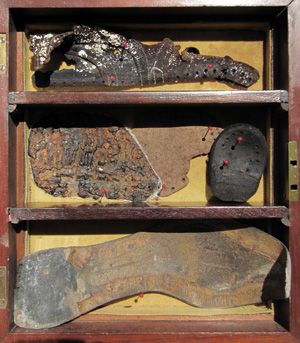