All the way down to Hastings again today….to take the work to the Hastings Museum and Gallery.

Discovered that the museum curator had chosen part of one of my images for a huge poster at the gate. Brilliant.

Wonder what they do with them afterwards? Mind you I think it could be wrapped twice around my studio, so no idea where I would put it….

and someone had to point it out to me…so big I missed it. 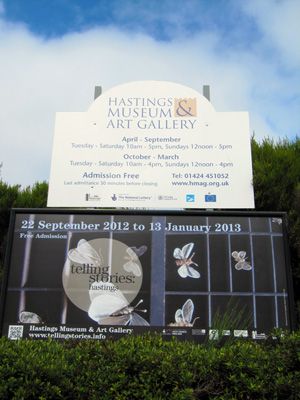 Another great day out….down to Hastings to join the QR code walk around the town. Neil and Dan from Zeroh lead the walk – they having been responsible for implementing the project on behalf of Telling Stories.

The QR codes were creative and beautiful – some featuring fabulous videos paralleling the work to be exhibited in TS.

Walking through the town we came upon a past Zeroh project. The Moth Project took stencils and rainwater and created ‘reverse graffiti’ on grimy walls. The results were hauntingly lovely and are still good even two years later.

Ambling along the seafront with the sea and the sun and chatting art stuff with other artists was a joy.

Reporting on a crit I took part in I was saying that I was concerned by the feedback that the work I showed was ‘too emotional.’ This produced some discussion as to why this seems to be the case at the moment. We are not talking sweet or even figurative here – in fact the work in question is monochrome found objects in a vintage box.

It was shown to the crit with an ’emotional’ title attached….maybe the feedback would have been different without it. Today there was some discussion around the patriarchcal overview of a male dominated art scene. The feeling being that clean, clear concepts and work was felt to be correct and anything entering the realms of the poetic or dealing with the personal emotional [unless political or dark] was somehow suspect.

Is this so? Are the majority of arts officers, curators, Arts Council…. male appointments?

Lots of PVs around at the moment…… or Opening Nights as the more PC version now seems to be.

Yesterday I drove to Battle and the Pure Art Fair PV because Ros Barker – my Farningham Hobby Horse partner- was showing new work. She had won the best drawing prize; so much hugging and congratulating.

Lots of artists I knew and some to catch up with from several years ago….a long drive but an easy, chatty evening. Art Fairs are not really on my radar at the moment so I felt a rather detached observer.

Working the way I do – wanting all my works to have a dialogue with eachother within one space – it does seem very odd to jump from one work to another and have them butted up against one another with the inevitable problems. That is not to say that the hang wasn’t good – it was. Just that it’s an impossible job to give work its own space unless you have a huge space.

This evening couldn’t have been more different. I was in Dartford Park for the launch of the Ecology of Colour by Studio Weave. It is an Artlands Project. I love their projects and this didn’t disappoint.

Built on Ecology Island within Dartford Central Park a sustainable building has arisen – its use will be open ended but will begin with workshops and performance.

Lovely to be outside in the wood, by a stream and with the light fading. Brilliant food – amazing – and with the chance to make plaster casts and natural dye prints. We all had to have a go of course and the results were spectacular. Nicolette Goff who was leading the workshop managed to get us to produce the most beautiful embossed prints with just blueberry juice, found vegetation and her book press. Magic.

I have done three projects in Dartford Central Park in the past, so its close to my heart.

Tempted to come up with a proposal …

It seems to be a time of endings at the moment.

Ros and I took the Farningham Hobby Horse Project out for the last time on Saturday. Beautiful weather and the usual lovely crowd. We should have been returning the horses to their makers but we had to negotiate with them to hold on to their horses until November as we have now been asked by a curator if we would be willing to exhibit them at an Olympic art event.

All done; so we wait to see how many will be required.

The Q codes that are presently up around Hastings will be going to the Harbour Arm Gallery, Margate at the beginning of October to form the nucleus of a new show that will run alongside ‘Telling Stories:Hastings.’

Now to decide what supporting work to show alongside it.

I am tempted to send my wasps in the test tubes that I bought in Margate. How to show them? After a long hunt I finally tracked down some tiny tool clips thinking I would attach them to board; but I am not sure. Have been Googling test tube holders…not quite right either. I need to work this out and get on with it. Maybe I should just drive around a lot – I think well in the car.

Much clucking in the coop……….an engagement in the family…how about this for my son’s proposal to his girlfriend? I wonder where he gets that creative gene from?!

I spent yesterday at the Olympic Park…great events and an extraordinary venue .. but art in all sorts of forms everywhere. Some truly memorable architecture- not just the event arenas but also things like the biggest MacDonalds in the world. Wonderful use of the natural and the organic. Wild flower plantings and planted walls, mirrored bridges and spectacular water.

I was fascinated by a Word Waterfall under one bridge. Sheets of water fall down vertically spelling out random words. Not light projected onto a sheet of water, but a sort of dot matrix – dots of water making the letters with space between. …and a splash as they hit the river. Silence and then another word [or two or three or five] falling into the river below.