I have my first opportunity to bid for a paid commission! It’s a chance to install work in a large foyer at Canary Wharf. What can I make that drives my practice forward whilst also meeting the brief?

I visit the site but make rooky mistakes. A tape measure is essential to check available dimensions, and I should have planned my questions before hand to shake out more information about the commission. Never mind – lesson learnt!

The space is so different from anything I’ve tacked before. My main concern is, can I actually come up with an interesting proposal? What this exercise has taught me is that there’s a process one must go through to allow ideas to develop. The main thing is to give sufficient time for this to happen and not to panic mid-process!

I first come up with an idea involving large Perspex panels but, on further consideration, I quickly realise it’s problematic – too heavy, too complex, too reliant on others to construct, and impractical in that it’s too large to store post exhibition so would have to be destroyed – a waste of good materials. Idea two is better – scaffolding components that replace my previous use of metal staffs – industrial, but interesting, with complex options for assembly and re-use. However, if the elegance of previous installations is to be maintained, the key is to scale up the collages in size appropriately – yet another exciting opportunity; to discover the potential of supersized collaging!

I usually sketch ideas roughly but this simply doesn’t cut the mustard this time so I make my first 3-D model from foam board, which after considerable practice I am now able to cut successfully into thin slices. I join these simply with string. It gives me a basic initial design, although I know from the way I work it will get tweaked in final construction in reaction to the specific characteristics of the materials themselves.

I decide to present my proposal as a Prezi – an on line presentation tool available free for low usage – which allows me to combine images and text effectively. It’s the next best thing to actually delivering the presentation in person and can be viewed anywhere if one has web access.

Overall, I’m delighted with how this project has gone. I really want the job – it would help my practice move forward considerably – but if I don’t get it I’m now so excited by the idea I will have to find another way to fund it! 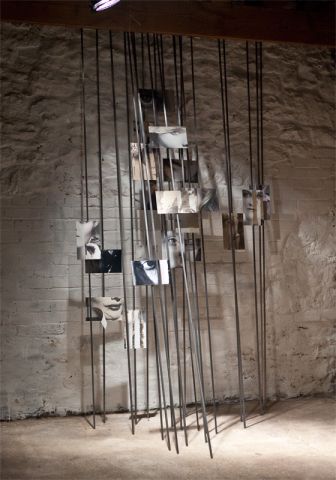 It finally feels like some sort of normalcy and a desire to make work is returning after the exhausting madness of completing my MA. The first project is both fun and useful in expanding my making – an opportunity from Spinach, a central London space, to take part in an open exhibition. The brief is to respond to the question: ‘What does Object Abuse look like?’ As Spinach say, ‘the possibility for speculation really is limitless. Who is to say the object in question is passive and not active? What really qualifies as abuse […], is it quantifiable and can we envisage its subtler variations? For that matter, what is an object; or rather can we say what isn’t an object…with any real certainty? Isn’t everything an object?’

I view all art works as objects but, perhaps contradictorily, I do make a distinction between pictures and objects in relation to their dimensionality. The collages I make could be considered pictures – they can sit, hung neatly on the wall – but I usually strive to exploit their 3-dimensional capabilities – to maximise the physical presence of their object-like state. Whether an object is passive or active depends on the associations created in the mind of maker and viewer – mine masquerade as passive but have active, assertive intentions.

Collages already embody an inherent act of abuse – one of appropriation, selection / discarding, cropping, interruption, fracturing, juxtaposition, tearing, and destruction in the name of construction. Given this, can I abuse them any more than I do? I choose to take this challenge literally so I pick an action (in this case, to tear), and enact it to extreme. In this I’m influenced by the torn, layered edges remaining after layer upon layer of posters have been pasted into position and then removed to reveal eroded, ruined surfaces of debris such as seen in the shot included of an advertising space on the Kennington underground.

After some intensive construction, destruction and abuse, it results in the collage shown here. In its true manifestation, its layers are 3-D rather than flat, attached loosely at the side. They will curl gently over time, affected by the circumstances they find themselves in and natural properties of the paper itself. Unstable; shifting, changing.