The ‘Installations that never were…’ (http://clairemanning.co.uk/z_installations_that_ne…) project has ground to a halt, perhaps because all attempts to shift it from virtual image to physical, real, scaffolded installation have failed, denuding it of charge for me. Alternatively, perhaps it represents an evolutionary dead end for my practice, either just now or perhaps permanently?

Forum Arts National Sculpture Symposium (http://forumarts.org.uk/talks/national_sculpture_s… ) is an interesting opportunity that might test this problem, necessitating making something that responds to site, allowing me to the experience to work with real scaffolding for the first time. It’d enable me to verify if what results is a sculptural object in its own right, is merely collage support mechanism, or is an alternative form of collage I haven’t tried before.

My strategy is to re-photograph my first maquette – a very angular, abrupt structure — with no collage on it. I’ve also made a second maquette to test a more regimented structure. Originally envisaged as a regular cube, it evolved into the collapsing cube pictured above as I allowed the materials and structure to speak to me in the now of making. For test purposes, I’ve photographed it both with and without collaged elements on it.

All photographs have been ‘green-screened’, leaving the object floating in an empty background ready to be dropped into any environment I choose. I’ll visit site this week to photograph suitable vistas to ‘install’ the maquettes in, which may well lead to more maquettes.

My final proposal for the symposium will be inspired by nature, either working with or against it as a harsh adjunct. What I suggest may involve bisecting a view to break it up to interrupt and frame the sections I desire — a view that shifts as the viewer alters position. My concerns may well remain with collage but perhaps through a subtle route; a virtual image hidden behind a QR code, only visible to those with the technology, time, and desire to activate the code? This would allow me to blend virtual and real; the real of the sculpture with the virtual fantasy of a QR image that never truly existed. 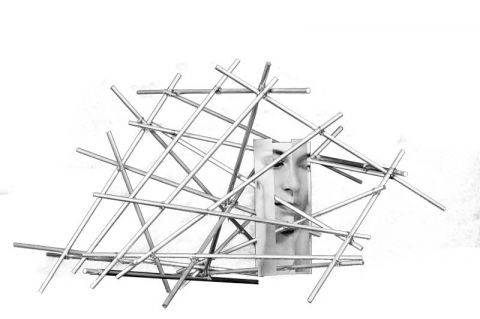 Time flies and making stops when project planning an exhibition!

Where has the time gone?

I realise any attempts to make art work recently has pretty much ground to a halt. Peaks and troughs are inevitable but this one links primarily to the fact I’m project managing an exhibition in June for Making Art Work (http://makingart-work.co.uk/on-tap-a-site-responsi…) and my rather obsessional nature compels me to complete preparation and planning as early as possible.

I usually handle website stuff so perhaps volunteering to project manage wasn’t the most sensible move. It’s been a baptism of fire – attempting to answer questions raised by others on marketing matters and producing a project plan myself when I’ve only limited experience of either — but I have learnt a lot, quickly, and it’ll be invaluable for my own practice in the longer term.

I also volunteered to produce the graphics for the show, somewhat silly in terms of its impact on my schedule but a useful new skill. Luckily I’d already taken shots of the venue on a site visit so I used this as the foundation for the design. The overall concept was easy to come up with but I discovered it needed loads of tweaking – obsessional changes and shifting around – to deliver an end result (above right) that I hope you agree looks polished rather than amateurish. I also realise it’s best to source a print supplier early on as each works to slightly different requirements and it saves time working within these when mocking up the final design.

Hopefully, with planning pretty much in place, the next month will be a bit less demanding and I can return to some making before the final all-encompassing push of getting the final show ready! 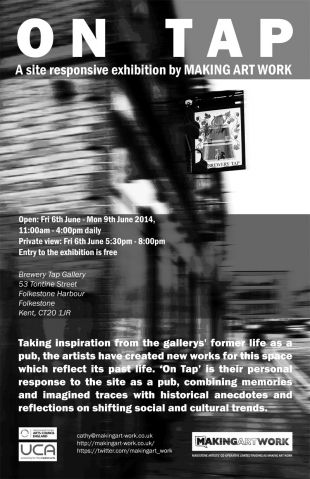