It’s strange; although I made this film it feels somewhat mysterious and unfathomable. It grabs my full attention each time I see it. Just for a short time I’m present in the NOW of viewing as the saturation of images centres me, jostling and disrupting each other in a quietly insidious way.

I’m drawn to something uncertain hovering at the edge of my senses. Look carefully – thoroughly – enough and perhaps it will finally reveal itself?

‘Images that linger’, ‘painterly’ – comments from the audience when this film was screened at Analogue Ensemble’s Live Film and Performance Night in June 2016 as part of Whitstable Biennale Satellite. It’s due to be screened again on 2nd June 2016 at Ideas Test, Sittingbourne and from 9th to 24th July at CGP London Gallery by the Pool, London..

View a short extract from the full film here 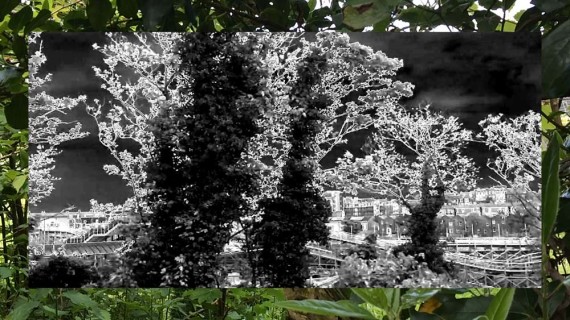 Well, a wonderful opportunity landed in my lap – an invite to produce a film for the Whitstable Biennale Fringe! The downside: make a new film connected to Whitstable in a few weeks when the last one took me about a year to produce!!!

Approach: find a connection between Whitstable and my interest in the train, use this to plan the shoot, film the journey in one hit using a PC for backup, edit using a similar approach to the last film.

Having a rough plan is great but let things evolve. I was drawn to footage of the countryside / water and I let this develop.

You can’t shoot all the footage in a day. You need to look at material gathered and use it to plan further filming. All in all, I spent 2 days shooting this time.

I don’t know enough about the hardware and software I’m using, or if they’re the best ones for the job. I need a camera that films speed better and to high quality (ideally 1K). I need editing software that copes better with large volumes of data and multiple layers. I need to understand more about file handling, compression, and output standards.

I feel the new film is more effective than the first. It’s becoming clearer what interests me with the work and these ideas are developing. I’m allowing this to develop.  I’m finding better ways to collage the results together.

There is a difference in feeling between the first and the second film so it feels like the work still has potential to develop.

My new film, ‘In search of the unreal n.02 debuts at Analogue Ensemble’s Live Film and Performance Night, 7:30pm, 9th June 2016 at The New Inn, Whitstable. This event is part of the wider Whitstable Biennale Satellite programme. 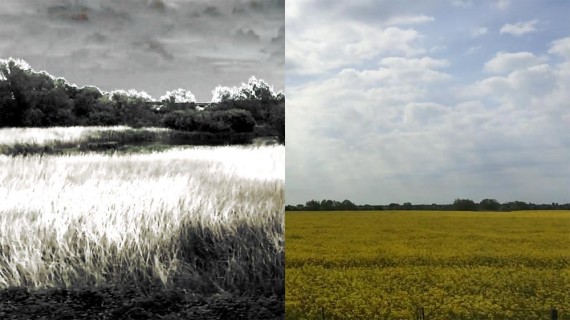 It’s been ages since my last post but, in my defence, the time has been well spent. The collage I’ve talked about in the last few posts is deceptively simple but was tricky to resolve. In the end, what worked was to experiment – make a sample, put it up, ponder the results. This applied equally to constructing the collage itself and the thorny issue of how to present it. I actually had one bull-dog clipped mounted version installed in the museum show before deciding to replace it just before the show opened – slightly unprofessional but the end result proved worthwhile. Here’s what the finished piece looks like installed: 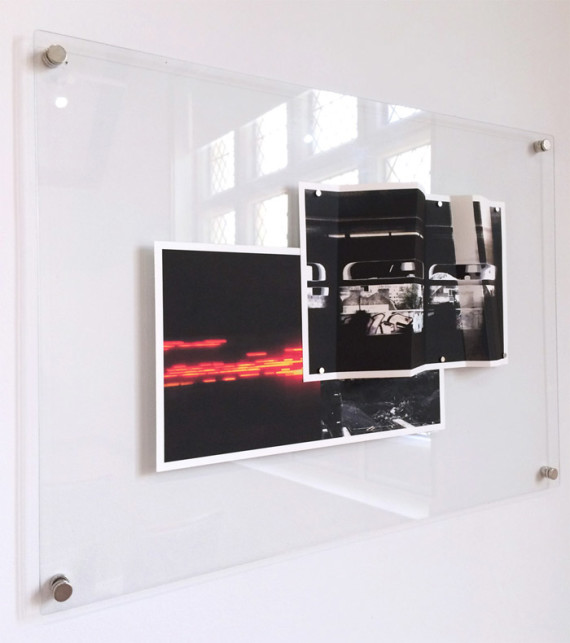 As the work’s reflective, it needed the gallery setting to get decent photos. I wish I could have added another 2 collages in the series beside the piece, but I didn’t have time. If the top magnet is larger than the one beneath, any problems with the glue or positioning are hidden.

Summary of the end piece: clean-cut paper edges, glass mounted, one image stuck down, the other magnet mounted. The easiest way to apply the magnets is by using a template – position on the back first then drop the front magnets on.

More about my work…