The object abuse collages are pulling up lots of material from the past, in the shape of particular techniques that obsessed me at the time but which never resolved themselves into finished work. As an example, the approach of To adorn first surfaced 18 months ago as image 1, which I liked but seemed wrongly presented, and has now finalised itself as image 2. These events have a kind of pleasing symmetry. Perhaps one’s instincts seldom lead astray but may have an unresolved charge that finds a home finally with patience?

New ideas for more collage abuses keep surfacing, such as the recently created To excavate n.01 (image 3) which results in an worn, distressed pit into which the gaze falls. These developments are difficult to force but emerge from left-field when least expected. They’re fun to make after the hard graft of the MA graduation show work, but should play a practical part as research material for future large installations.

The two installations from In the shadow of her gaze have both been successful but are frustrating in that they rely on wall support. The next goal is to abandon this security. In my mind’s eye I have a vision of rocking up to exhibitions with a stash of components – metal, fixings, paper / collages – to install with no reliance on solid surfaces other, perhaps, than the floor, shuffling components each time in an endless parade of possibilities. In this, I’m inspired by the varying ways Annette Messager installs work to create something new for each site.

However, I must be certain this sort of shift is right and not just a passing fad. Also, I’ve learnt some valuable lessons so far which cannot be discarded lightly:

Reflection is vital for the power of glass or mirror to pull the viewer into the work.

The implied threat running through the work in terms of the way collage on top of each other, interrupting and disrupting, seems crucial.

Retaining an overall simple elegance to the work feels important – connected to form and the balanced scale of individual elements.

Scale remains up for grabs – perhaps the work should be more dominating – the billboard effect?

I’ve said this before, but this all calls for more serious testing with maquettes than I’ve attempted previously. But I’m conscious of avoiding the task, put off by something – perhaps fear of the unknown, or of failure???

What sort of things scare you when making art and what tactics do you use to overcome them?

Here’s the third enlarged collage (41 x 66 x 1 cm). Both this and its smaller preparatory counterpart work but this version’s bigger scale allows an apt greater excess with the magazine decoupage elements.

David Minton writes in relation to my piece in Tension at Sevenoaks Kaleidoscope gallery that it ‘is both physical […] and at the same time, in a curious twist, contradictory of its physicality through its conceptual nature.’ This is fantastic to hear as, for me, it indicates the mix of making and conceptual thought are well-balanced within the piece. He also connects what the piece initiates in the viewer to a provocation to reassess oneself. I know I feel this about the piece, but it’s one of those slightly nebulous characteristics I wasn’t sure if others were feeling as well so his comments are encouraging. 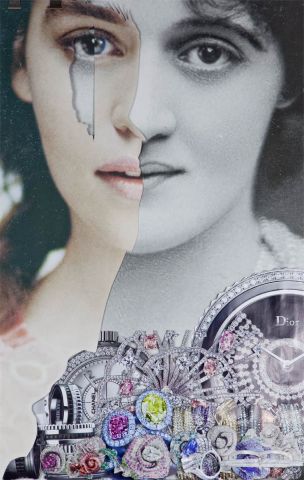 Yesterday, I watched the film Eden, staring Jamie Chung and directed by Megan Griffiths, about the abduction and sale into sex slavery of a young girl in the USA.

A key area of my practice research considers how we live in ‘a culture governed by the invisible but many-legged tarantula of patriarchal law’ so we invariably look with a gaze ‘ordered by sexual imbalance’ to see stereotypical roles of ‘active / male and passive / female’ perpetuated. (1) (2) (3) It is an endless dance of dominance and submission that finds the powerful few elevated from the multitude (the horde with little or no power). Although this issue connects to gender, it doesn’t adhere to a strict male / female divide — both men and women experience the inadequacy and lack that subjects them to a submissive position within specific cultural situations.

Strategic mimicry offers one means of escape from this masculinised perspective, transmuting woman from victim of mime to its subversive instance, co-opting masculine discourse and disrupting it, reinvesting its power in the feminine. (4) My current series of work falls into this bracket by appropriating images that offer the promise of perfect, passive female but using cropping, juxtaposition, and the way they are re-made to undermine gender stereotype, supplanting masculinised values with the power of the feminine. However, the danger with such a strategy is that one simply perpetuates what one wishes to evade.

Eden could easily have adopted a traditional approach but is unusual in that the majority of violence enacted upon the young women it portrays is implied rather than shown, so no sexual acts are depicted at all, for example, negating any possibility of audience titillation. Thus, the masculinised discourse in Eden is only partially allowed to play out; the girls may be dominated by their male captors but this inequality in power is subtly rather than brutally depicted and is never glorified. The lead female role communicates an undercurrent of quietly persistent resistance which builds until she enacts her revenge and escapes masculine imprisonment.

The film left me with several thoughts. Firstly, that it’s brilliant — well-worth watching — and secondly an uncertainty about its reality — surely the events depicted never happened in modern-day America? However, whilst Eden isn’t a true story as such, it is shocking to discover it is based on parallel events that happened to Chong Kim.

If I were to make new work in the spirit of the approach used by this film, the perfect, passive female images I utilise possibly need to be less apparent, superseded by a presence that’s more implied in nature. Something that springs to mind is a series of work entitled Mes plus belles coiffures, 2011, by Sharon Kivland which offer a traditional crop of the female head, but shown from the back to more assuredly negate any possibility of a perfect passive female image. Alternatively, as a greater extreme, detail could be completely supplanted by a shadowy outline in the spirit of Kara Walker.

I’m not sure how to use this information at the moment, but I suspect it has potential for future projects. 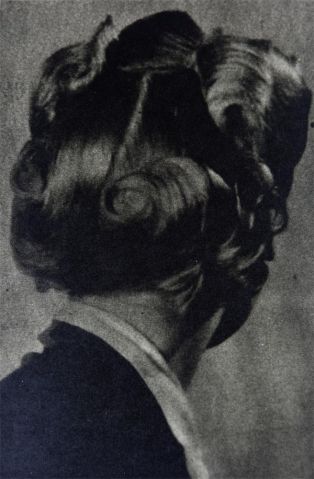 The collage abuse series now has two large-scale collages fully completed to add to the several small exploratory pieces already made. Both sizes of work feel strong but the larger pieces offer the space to achieve an intensity and variation the smaller works don’t. To accrete n.05 delivers a tangible physical presence as the thirteen layers of paper from which it’s made shifts two-dimensional print towards three-dimensional form, an effect further emphasised if the picture is allowed to tilt forward slightly at the top.

If, as Eivind Buene suggests, collage is concerned with breaking ‘illusions of continuity’, operating in the nature of ‘a shock’ to ‘articulate discontinuity’, then the metal clips that fasten the paper serve to add further to this effect. (1) In the case of To accrete n.05, their brash gleam disturbs the otherwise more subdued finish of the printed surface. However, in To slice n.02 they add their otherness to the somewhat alien note of the mirrored surface the prints are mounted upon.

The precise subtleties of this series are difficult to capture adequately in photographs. As an example, the small mirrored sections of To slice n.02 photograph as black. However, the images, right, have all been recorded by adding two daylight spots to my repertoire of tripod-mounted camera, successfully ‘upping my game’ I think. They deliver a fairly accurate white balance so that less / no adjustment to exposure is required in Photoshop, capturing far more detailed information that even portrays distinctions between the different print methods. Worth the extra hassle I conclude.