Inspiration from a trip to London last week. 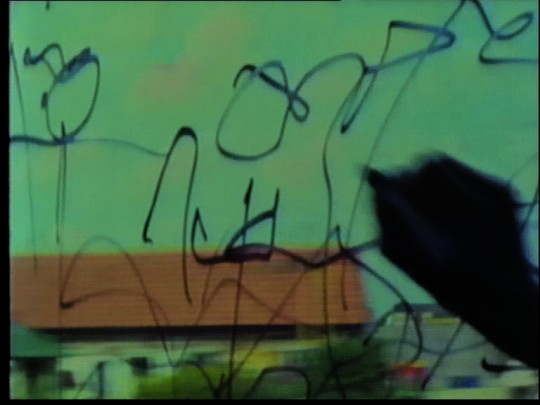 Rachel Lowe – the impossibility of drawing the landscape as it speeds by (1) Link to a shot of the film footage.

Yuri Pattison – dislocation that results from a moving image travelling at one pace set inside another moving in a different direction. (1)

Betsy Dadd – the fracturing of a projected image. A modest sized image projected onto a wall, interrupted by a mirrored panel that pulls one’s feet into the shot. The mirror also throws the missing slice of the projection, enlarged, onto the opposite wall. (2)

Lara Lee – the hovering projection. Fabric screen, TV screen sized, weighted / rod-stiffened at the top & bottom, suspended on fishing wire. In the darkness, the screen appears to hover in the middle of the room. (2)

1 Part of ‘Art Now: The Weight of Data‘, Tate Britain, on until 25th October

Barbara Hepworth, from Tate Britain show on until 25th October – the architectural lines within this drawing. (1)

Barbara Hepworth, from Tate Britain show – how the physical lines within sculptures like these alter the way the space is activated. (1)

Question: taking an approach used by artist Deborah Humm, if I use my body as a seismograph, will the biorhythm drawings made vary noticeably as a result of watching different types of programmes on TV?

These feel as if they reveal something of my state of mind at the time of making, unsurprising since my body was part of the drawing tool. This feels like a perfect medium to trap motion on the train, where the seismograph would be my body, the motion of the train and the pencil. It’d also be interesting to test the difference when my body is removed from the equation.

The spaces where my surveying takes place can be considered non-spaces – railway lines, stations and the train itself – although I do capture images adjacent to these spaces as well. Images of non-spaces show locations that don’t comply with a social, cultural or environmental idea of place, revealing something more concerned with psychological or personal factors; a place localised outside time and space.

I’m beginning to see a spatial connection in some of my recent photographs.

Marc Augé points out that we have an uneasy relationship with the space we occupy. Our steps into outer space ‘reduce our own space to an infinitesimal point’ made obvious in satellite photographs. (1) ‘But at the same time the world is becoming open to us’ through improving transport and via communication systems that beam pictures into our homes of events happening on the other side of the world. (2)

When I survey the train journey from Marden to London, from Augé’s perspective any representational images that result establish a false familiarity for the viewer, who feels as if they know the scene / events depicted personally although they weren’t actually there when the footage was shot. Such an effect translates equally into other situations establishing a false recognition between viewer and on-screen actors / characters, landscapes, places and historical or contemporary events. (3)

The worlds created in this way are largely symbolic and offer recognition rather than knowledge. They are ‘closed universes where everything is a sign; collections of codes to which only some hold the key but whose existence everyone accepts’. (4)

I suspect the impact on the viewer varies. So, for example, my survey of the train journey probably results in a higher balance of knowledge / ‘truth’ than recognition / sign for the one viewing the results. However, a TV series would likely switch these proportions around. This is interesting as it offers a point of manipulation I could choose to exploit in the work.