i’ve known for a while that at some point another tranche of the non linear project at derby silk mill will begin.  initial discussions are suggesting a realistic budget with good access to the building.  the when is dynamic.

last sunday while walking to join friends to relax and catch up in the sun an email notified me of an opportunity – deadline was in 2 days time.

a collaboration between york university and bbc research and development – it appeared to be within the sphere of non linear programming.

wether the sun got to me or the gin and tonic – i convinced myself i should have a go.

to help with my research i did some initial googling for inspiration for a title.  with great joy i found a blog post from 2015 by tony butler.  i got what i needed and proceeded to look through the criteria for submission.

the document was large and many things were being explored and invited to be presented.  through the google group i shared my decision to have a go and this was to prove beneficial later in the process.

since completing the submission i’ve taken time to watch a video from the re:make stage of the museum development.  i’ve watched it before.  from it i get a sense of time through how the building and people look within the video by owen davies.

monday was spent adding words in answer to everything i thought needed some sort of response.  tuesday began with contact from sue – the google group alerting her to this surprise submission.   with word of support proofing the draft i sat back down with determination to get something together. 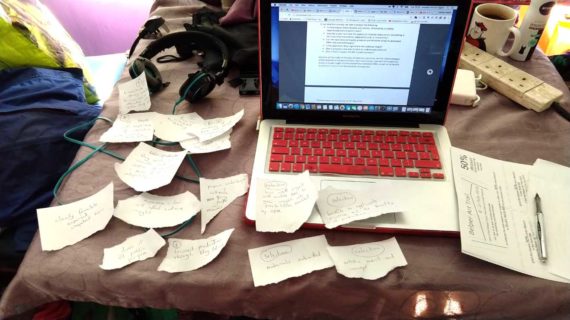 to help me i did something i’ve not done before – i wrote down all that i thought there needed to be answers to  and used these scraps of paper to start to build a structure for my submission.

i looked at the pieces of paper – i saw a submission in non linear form.

with sue’s help i got the submission into 2 sides of a4 and sent it in with about 2 hours to spare before the deadline.

reflecting about the method i adopted to construct the submission – non linearly to begin with – it occurred to me, why have i not used this approach before ?  it might be that the criteria and information required was so wide and many that maybe in the past the submissions haven’t needed such handling.

my decision to use the non linear approach was good because i knew i was struggling to hold and visualise how to put the blocks of words i had together.

in my tired state afterwards i did get a little down about my disability with handling words – i wonder even after 10 years of knowing about it i’m still not fully in a state of acceptance about it. 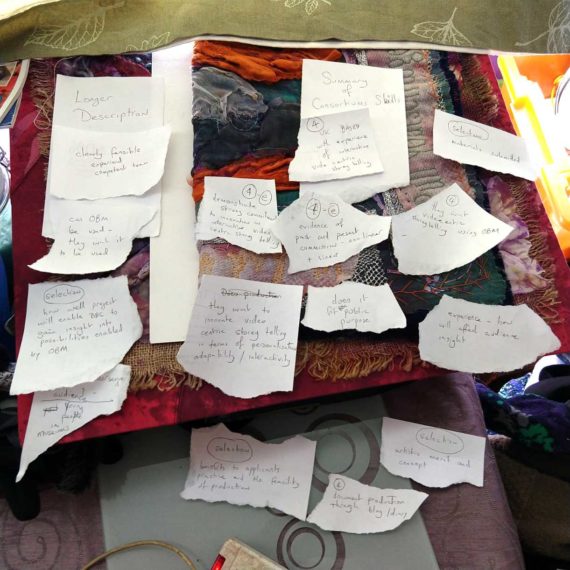 knowing the submission needed to be in two sections i was able to assemble the non linear components into a structure that i felt would work.  i also get some interesting pictures of pieces of paper for my blog.

since submitting i’ve been more in a head space to consider the third tranche.  i’m closer to wanting more speaking from those involved.  the building will still feature – documenting how it evolves – i do feel that i want to capture people who are involved in the project in a manner that allows them to share about them and their involvement in the project.

how might we represent the people within the project through giving them space to tell us about about themselves and their relationship to the project ?

the third tranche also presents me with an opportunity to to push my my own practice.  there still remains the possibility of the third tranche being funded through the submission and it’ll be interesting to see how using the bbc’s experimental authoring tools the third tranche further evolves from where the second is.

in the event of an unsuccessful bbc / york bid – i will get to push myself with the platform i already know to create a third tranche.

little did i expect upon leaving the house on sunday to have done so much work on the third tranche  by thursday.