been on site today, really enjoyed myself – been a week since i was last on site – loads of new things to look at.

from a bus ride over the derwent i could see how the italian mill’s front roof has come together.  knowing this, my mission today was to go back to the mill and film in the areas where the recent work has been most focussed.  i was focussed myself as i needed to get back home for this afternoon – the central heating boiler was being serviced.

the first port of call today was the roof.  partly tiled the wooden lathes sat proudly under the cloud packed sky.  one question i’m yet to ask of the site is about working externally in the rain.  is there a point at which the work stops ?

back on the ground i took in the latest edition of the space for the soon to emerge civic hall.  each time i visit this space its components are arranged differently.  later we will see how the foundations are taking shape.  from this distant vantage the work so far isn’t visible. 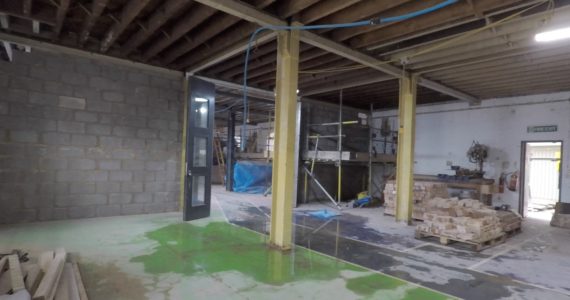 in the creation of this work i am tracking the transition of the clearly visible work taking place on site.  in the workshops this is has been the case today.  in a few days several walls have popped up giving a new sense of how the workshops spaces will be partitioned.  they follow the lines of what was there before. 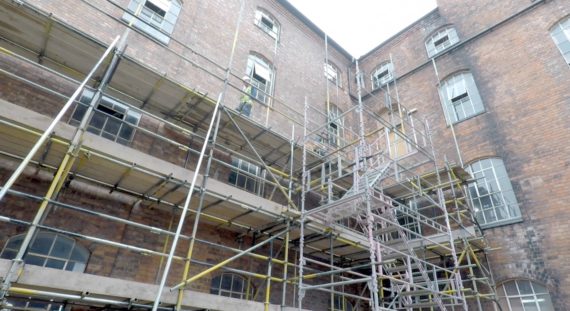 when on site i walk from area to area and this sets up a flow and rhythm.  from the workshops its a quick step through the door to visit the south wall of the sowter mill – today scene of another run of scaffold being put up.

i met the scaffolders very early on in my visits to the site.  i stood and watched them for a while.

on site there is so much focus that the odd bit of chat really becomes important to keep everything in perspective.  i find myself being part of these little discussions now too.

my tight time slot today meant that for most of filming the main morning break was happening.

ahead of the wave – the site engineer.  i watched as he measured and wrote something down.  his role on site is to mark out where the work needs to take place in.  we often share a quick chat.   on this occasion we didn’t.   after making notes he headed up to the next floor.

trying to get another another angle of the sowter scaffold led me to see the civic hall foundations.  i was on an upper floor and i found the large elongated excavations quite haunting.  something i shared when i was back in the site office. 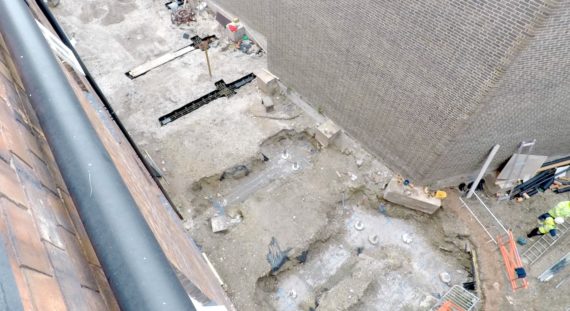 as i worked my way up the floors i got closer to something i really wanted to do today – film in the newly opened up tower space.

all the images in this post are frame grabs from what was shot today.  i get so engrossed in filming that i often forget to take photos.

the walk along the third floor area now ends in a developing space under the new roof and to the right are three new openings leading into the tower.  a scaffolding floor makes it safe to enter.  i filmed in the tower and have two frame grabs to share of the view. 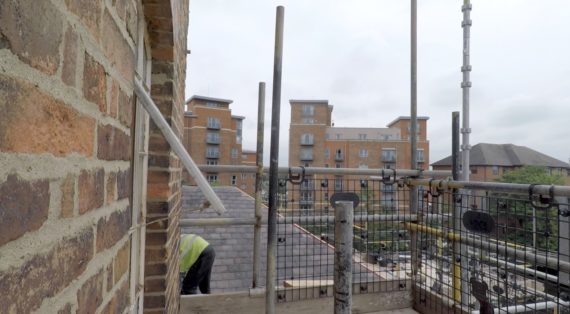 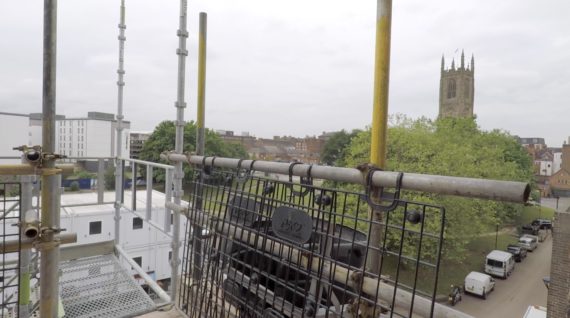 looking at the view towards the cathedral has reminded me that as i walked into the site this morning, one of the peregrines from the cathedral was circling and calling really loud.  i’m not a peregrine behavioural expert so have no idea about what was going on.  in reality it felt quite special to be walking to work hearing the sound of a soaring peregrine.  when i go through the audio files later i’ll check to see if i caught any of the auditory display.

as i made my way back down, the work to open up the second floor entrance into the accessible storage area was beginning.  i’m not to sure when i’ll next be on site.  i’ll make sure it’s not too long. 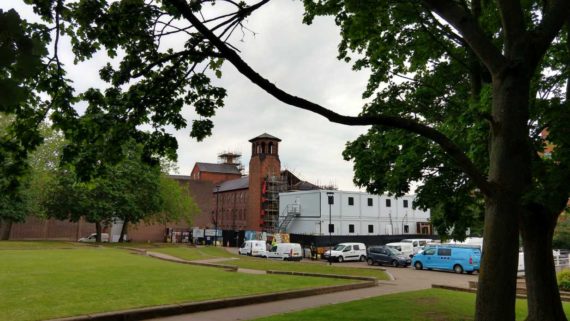 since the recent arts and heritage meeting i have been processing what we learnt.  its been tricky doing this as alongside this commission i have other projects and commitments that need to be kept live and up to date.

in the meeting i spoke openly and frankly of how the whole process has been for me so far.  i described the good things and the things that were needing work to resolve.  i shared how in amongst this all the notion to keep filming was becoming a core aspect of the project.  the final form of the work might not yet be known – having content to be included being key.  for now content is most important.

no 360 video at the moment – my 360 camera being part of negotiations to see it being sent to hong kong to be assessed by the technical department of the manufacturer.  i hope for a speedy resolution and more 360 edits getting done.

there isn’t a set routine for my visits to film.  in fact being flexible is proving to be advantageous, for example the crane for the rear roof lift was several days later than originally expected.  it’s the way of the site that there isn’t drama if the plan shifts – merely maintained focus and getting the job done. 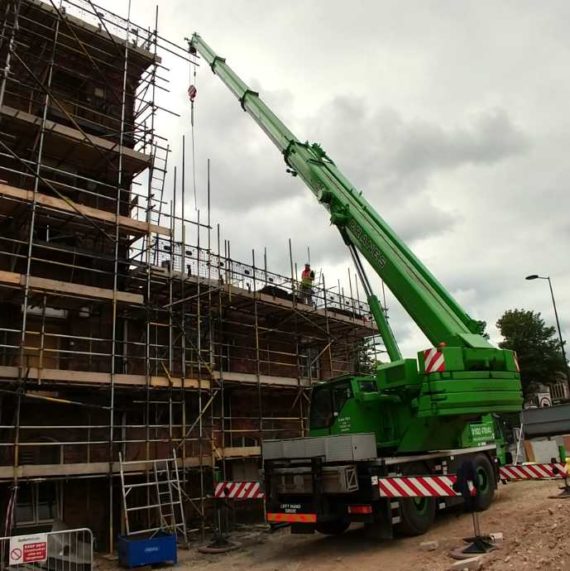 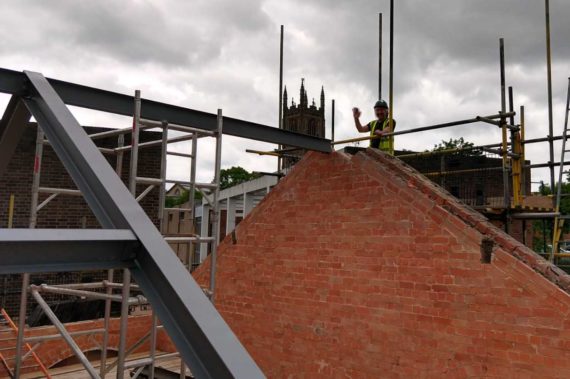 getting the job done …

i spend time considering how the final work might be in terms of screen size and means to interact with it.

in my previous post i talked about how i might prepare for the meeting.  i went way beyond what i thought at the time and shared with the group a collection of clips arranged within the application i used to publish shimmering place.   there was positive reaction to the clips and i witnessed first hand the interest in what is going on within the silk mill.  we co produced our version of events.

within the co-production method used  at derby museums, part of human centred design, there are opportunities to test out questions and ideas.  at a personal level i have been in many sessions where i’ve waved arms with pens and come up with ideas based on the question.  last thursday the situation was swung 180 degrees.  in asking the questions i didn’t know what we might get in return. 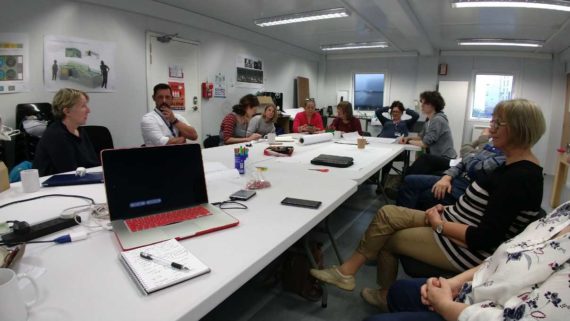 we spoke about how the work will be situated in the area that describes the transition to the museum of making and how potentially visitors might experience the work.

we attempted a piece of rapid prototyping and in the feedback session that followed i heard ideas expressed that had been briefly in my thinking in the past.  questions of accessibility and methods of interaction being expressed. 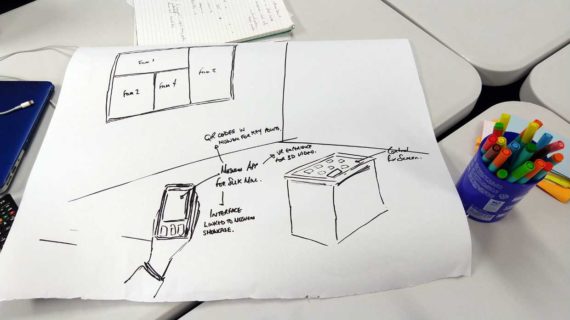 i found the rapid prototyping exercise and the feedback from it very energising as so many ideas arose that some of the things i had been struggling with near the start were recontextualised.

post meeting i’m sitting with how to process what i heard and learnt.  to find out how viable they might be i have everything to gain by prototyping them and sharing at the next meeting.  i pause a moment to consider if this might become an exercise in design and if so how do i feel about this ? 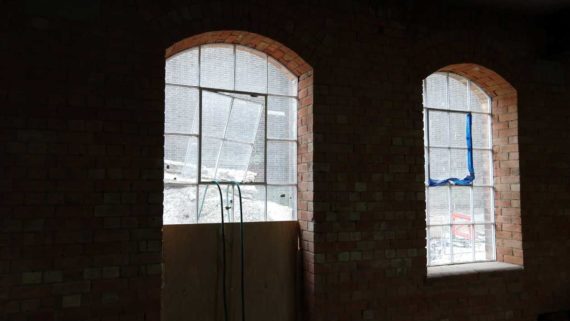 returning to the focus of maintaining the filming, i do live with an almost constant feeling of what am i missing on site.  this mostly exists when on the tired side and knowing i have files to sync at the beginning of their post production process.  i am learning a lot about a building project – renovation project to be precise.

i’ve needed time to process the meeting last week and to return creating after doing something else at the weekend.   my thinking races away and i know i can’t sustainably work that fast.

keep filming.  the rest will come. 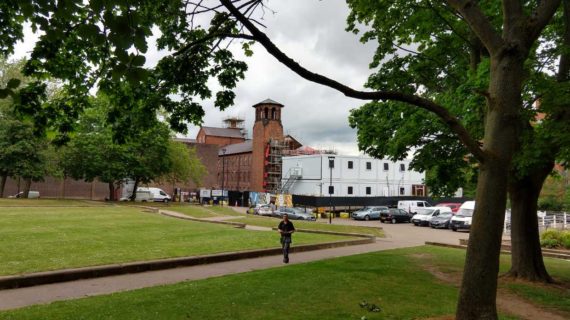