alongside the practice based research, i’ve been attempting to broaden my understanding of the theoretical space i’m working in. 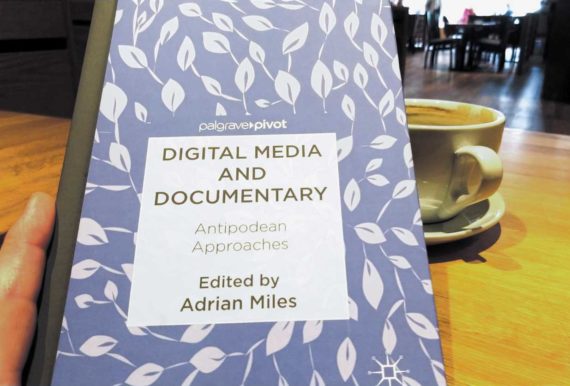 finding this book feels so right as one of the contributors is max schleser, who i know as the organiser of the 2018 mina symposium at which i presented shimmering place.

of the seven essays seth keen’s is the one i’m currently working with:
The Documentary Designer: A List of Propositions for Interactive Documentary Practice Online

it’s a large piece of writing to process so i plan to break down into small sections.

keen opens by setting a scene.  he links design in context to the internet and it’s fast pace of development.  design being a process that responds to the problems arising through change.  keen’s scene is based on the internet.  this is ok as previous works from me are available on the internet, and we are yet to see if this current work is fully hosted locally or on line.

keen draws our attention to how interactivity has moved away from the “choose your adventure” preface to an either/or structure and how design is a key component of interactive documentary practice.

the internet is multilinear and this is transforming documentary practice.

he cites Ryan 2004, 338 – interactivity changes medias “ability to tell stories and the stories it can tell.”

using korsakow produces a more fluid experience than one where each scene is glued together (thalfofer).

getting further into the introduction keen starts to outline his conceptual infrastructure he’ll use to take us through his vision.  affordances he states are the properties of things involved in delivering the interactive documentary and are :

i see how korsakow fits all of these affordances.  korsakow being the application i’m planning to use to realise the non linear project.  this was invented by thalfofer.

keen presents an argument for videos that can be remixed into different combinations as having a “web of relations”.  the only problem with this is he seems to be suggesting that the web is literally the whole internet.  for this project the space is more clearly defined.

he touches upon bordwell and thompson’s categorisation of linear and narration to arrive at interactive documentary on the web being multilinear non narrative.  for me it starts to get a little too tight and i find myself pulling back slightly so i can still breath.

“designers are problem-orientated practitioners who integrate hands on skills with conceptual ideas, thinking through their making to create solutions to problems.”

“design thinking recognises that artefacts are propositions that are ideas.”

what has emerged for me is that in the space i am working both change and problems are common place.  i am in effect working on the edge of change – it’s going to be uncomfortable – and it has been.  this uncomfortable feeling is normal and rolling with it has been the best thing to do as it’s not going to go away.

in taking a rest from my note taking i day dream as i look around the coffee shop i’m in. i notice a singer from a band queuing for his latte, about to sit and converse.  i realise that people’s lives weave in a multilinear fashion, transitioning between updating each thread.

i see myself as having a multilinear life.

alongside the content creation, i’m also researching the user interface.  this is currently happening as two lines of research

the accessibility considerations involve me adding additional code to hack the live code produced from the authoring software.  i’m not sure if this has been done before.

at the moment the accessibility research is very separate from the main interface development.  i anticipate at some point the two needing to merge and how might they inform each other.

so for now the user interface research is without accessibility considerations.

in going forward i am going to need to open up the accessibility considerations to the co production process.  i really hope our on going arts and heritage meetings can provide an opportunity to connect with volunteers with knowledge and experience of visual combinations of colour to provide the best possible experience as well as ways and means of testing the work.

i reflect that the recent research has been about the technical.  soon it will need to move into aesthetic considerations.

another aspect of the interface design i’m considering is might it work to include sections of drawings for the area of the mill being featured.  this is an idea in progress.

so something to do soon is to bring all the pieces together and see what mess i can make – with a view to edit and clean it up.

to be honest with you, at the end of may when accessibility appeared in conversation it lined up with some passing thoughts i had had and it took me out of my comfort zone.  i had no idea at the time how to achieve what i believed was being proposed.

now some weeks on and i can see it will be possible in some form.  what it will undoubtably do is influence the overall design of the interface.  this is new to me and need to have more conversations about it.

in considering how to make the work accessible as possible, as well as contrast considerations there’s also colour blindness.  most of the thinking i’ve been doing has up to now been centric to using colour.

just how far do i need to go to make it fully accessible?

at what point do i need to work with a practical compromise?

new areas of the site are still being opened up through the completion of more scaffold runs.   recently i’ve been able to access the southern side of the sowter mill.   the scaffolding facilitates both work on the roof and the windows. 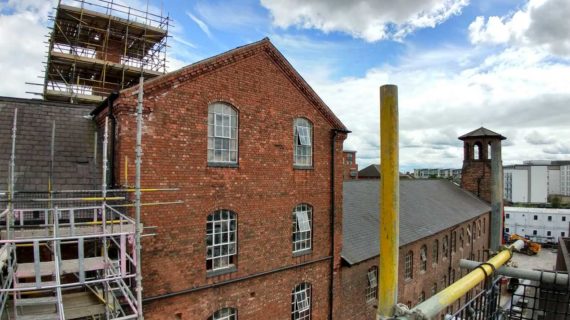 climbing the access stairs,  i know they are sturdy and solid and everything is ok.  carefully i make each step count.  i make my way onto the scaffold boards.  again these are solid and ok and every so often a warped board moves creating a sound and a moment to look down to ensure all is ok – which it is. 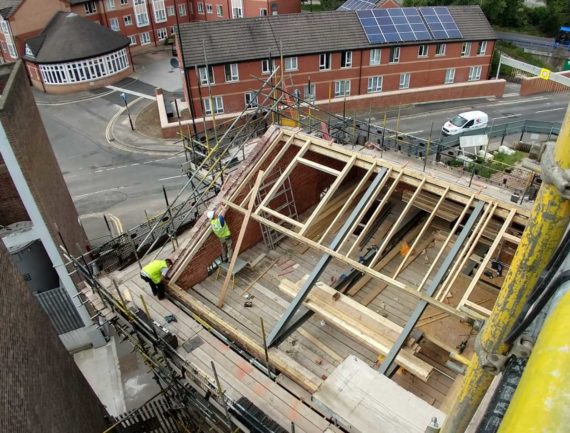 as i walk around to the north facing side the wind gets up and i stand to experience the bracing nature of this.  i had a similar experience the first time i went up the scaffold on the front of the building.  over time i become more familiar and more confident. 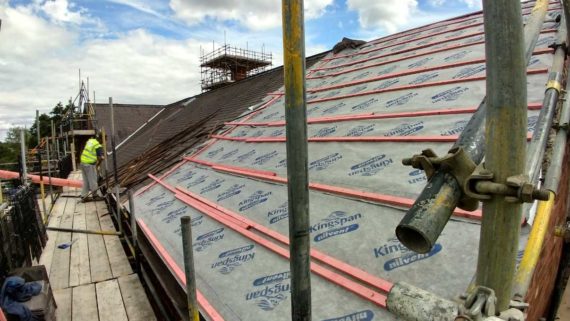 of late i’ve noticed i’m more confident in speaking to those working on site.  like them, my focus has kept me in my little work bubble.  having become aware of this, i’ve begun to make opportunities to speak to the work people on site to explain what i’m doing there.    what i’ve found is  there is an over riding interest and enthusiasm for what the museum is doing and how what i’m doing fits into that. 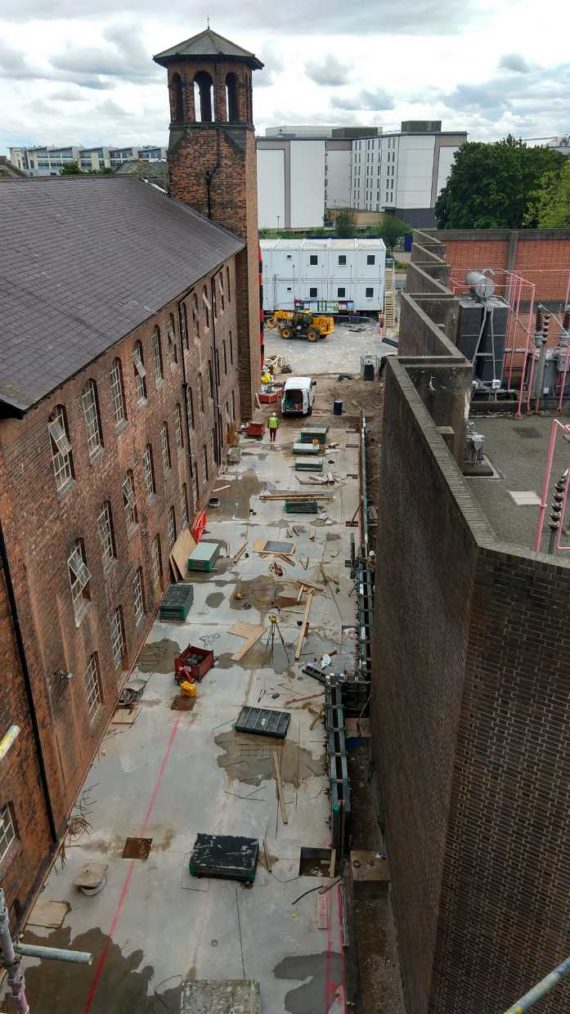 i’m pleased with how this is progressing.  recently i’ve adapted my working practice to make it easier to monitor the sound recording on site and this in turn has seen a time improvement in doing the initial work in post.

the 360 camera i sent away to be repaired has returned and now has a new fault.  i’ve reported this and await further updates.

the building of the civic hall has been gaining momentum of late and  i’ve been concentrating on this.  soon the steel will arrive with something soon to follow. 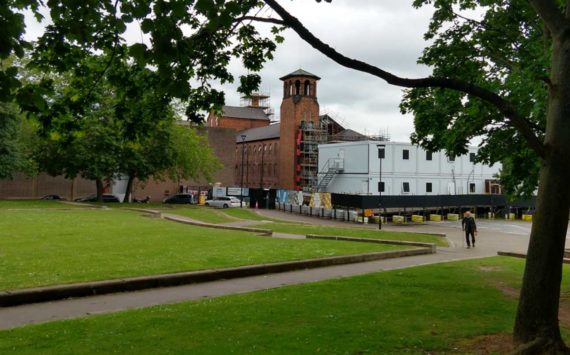