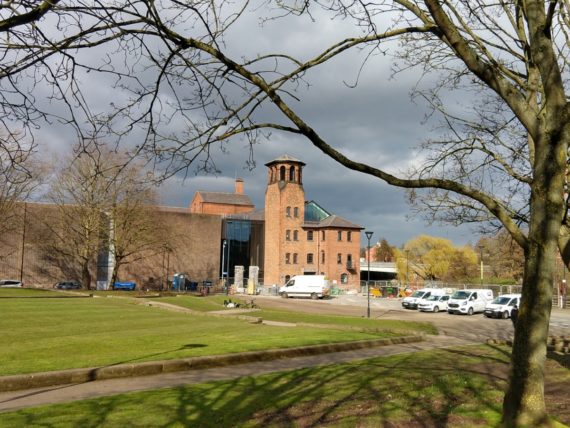 before answering the question today i want to make reference to a tweet from yesterday.

(i’m disappointed at not being able to embed this tweet by the way.)

the tweet has a periscope video of sally and daniel describing “decant day”.  the day of the beginning of the physical movement of the collection objects from the silk mill to an off site store.

i watched it last night at felt some emotion of my own at viewing and listening to the video.  mentioned in it are the library and the model railway, both featuring in the first two tranches of my on going non linear documentary project of the museum of making at derby silk mill’s journey to realisation.

i pause a moment and the thought of personal journy – personal storey comes to mind.  hang onto that because i want to return to it again within the answer of the three question :

3) You filmed activity that happened to occur when you were in the museum, by serendipity. What were the opportunities and pitfalls of this approach? what would it allow you to do if you received a schedule of activities in relation to the decant or engagement programme? (intervene i.e. like placing the camera on the model train, go into hard hat areas/ interview construction people etc).

before entering into the full answer of this i need to add a note to answer two.  writing deeply about this is having an emotional impact upon me and i think i need to hold this gently as i’m learning something about myself and the non linear project.

actually before the answer another thing i need to note.  during this project i’m observing how the langauge we use to talk and describe it is evolving as we learn more about what a non linear film – non linear documentary –  is and how we think and feel about it.

serendipity – according to google

there’s something about the word that is romantic,  spiritual if you like.

within the museum of making project there is very little left to chance.  the project knows what it is and knows where it’s going and like a toy boat in the bath has had gentle guidance to keep it on course.

so this for me suggests an attitude of view for the happenings i witnessed.

in setting up me being in and around the building i took time to talk with the members of staff and volunteers involved with the work during the period of filming.  incidentally this became longer than originally intended by about a month. 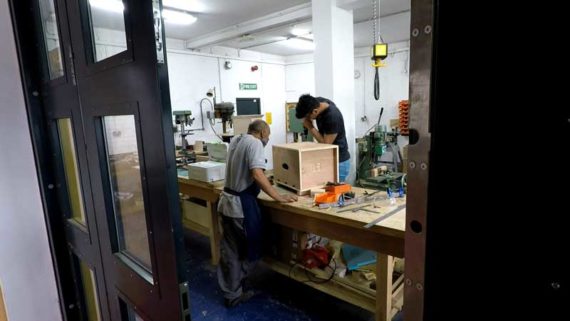 you might argue there was serendipity in the moments i was filming and i wonder if this is the case as maybe we don’t have the language to describe in any other way.

there’s one narrative unit that springs to mind in the library, smiths of derby are mentioned.  thinking about this now it sounds really significant and it’s something i captured as i was there to capture it.  decisions prior to that moment had led me to be there at that time.  the way i’ve been working will produce these moments of surprise and wonder as a result of working at not setting something up.

the decisions i made as an artist to be in a certain space at a certain time set me up in that place – to be a filmmaker to document what i saw.

that artist being driven by curiosity and wonder – what’s happening today ?

this approach worked because of the amount of work needing to be done and the time over which it occurred.  i wanted to try to infer work over time with the footage i created.

while in the midst of filming i realised that what i was filming where periods of calm in amongst all the conversations and actions happening around the silk mill.  i had somehow captured the wellbeing aspect of what was happening in the silk mill, something that as an organisation derby museums has an ambition (1).

there were of course pitfalls.  the main one is the not being there for certain things occurring.  very early on was the structural ceramics day and late on was the harrison clock being taken apart by the smiths of derby apprentices.

from a practical viewpoint i can’t possibly be there for everything and this leads me to a space of thought.

as a visitor i can go somewhere to view something, do something, be something.  i can go to the museum, there will be permanent exhibitions, temporary exhibitions between set dates and there will be one offs.  through prior knowledge i can plan my visit to see a specific thing.  through a feeling on the day i can visit and experience what is available that day.

my work in the silk mill over the summer was to some extent very similar to be ing a visitor to a museum.  i might argue that the finished project gives the viewer a visiting experience because of the non linear format.  the viewer may or may not see everything that is on offer. 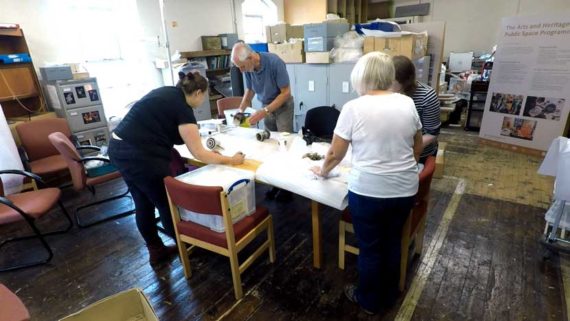 within the four questions i’m answering there is a subtle overall question of what are you going to do next.  this is certainly a question i’m asking of myself.

in question two there’s the focus on dialogues.  with the collections moved and the people altered, what remains constant is the building and me as the artist being onsite, observing and being a filmmaker.

i have a romantic minds eye of the building being empty and quiet and me roaming within it.  experience shows me that the visualisation is usually not fully realised.

i said the people have altered.  here i’m thinking about those working in the building.  those who remain the same are the project team and it is here that the dialogues about the next tranche will begin.

the building will become about stories so why not explore stories while the building is at its emptiest ?

note to self – film a conversation – edit it into several narrative units.  sit with this – let the thought develop.

in keeping with what i’ve already done, the next tranche will be my response as an artist to what the space is like and the people currently working there.  i’ll talk with project staff after chatting with hannah fox the project leader and i know that after talking with her there will be a guiding framework in which to work.

the second tranche had less snu(2) than the first so this pattern suggests the third will have less than the second.

the more information and knowledge i have of what is happening and when will help me to create a piece of work that captures the feeling within building.

i’ll add that making a non linear project isn’t easier than making a linear one.  this may not be a question you’ve ever asked yourself however it was certainly one i wrestled with while filming, editing and authoring.

the second tranche has taught me alot and the most important being in the beginning don’t worry if the whole(the what it is at the end) seems unattainable.  simply keep focussed on the feeling while filming and wait for it to come together over time.  note to self – it will do because of the work you do to discover what the whole is.

i like to work with what is there and what is happening.  this is underpinned by researching what this is with those directly involved and making those within the activity comfortable with my presence.   on site i let playful curiosity, the feeling from already shot footage and the feeling of being there guide what i film.  working non linearly is an accumulative process.