Yesterday we had our first artists’ film and video screening. Everyone in the studio works with moving images at least occasionally and Andrea and I are pretty much full time film makers, so it is appropriate that the studio be a space we can showcase our work and that of others. We want the screenings to be informal and to provide a point of debate, not only about the films themselves but about filmic practice.

For our first show we decided to screen work we made in the past. This was interesting because as well as show our work to the visitors we also actually ended up introducing ourselves to one another. Nazir made two films back in 2005 and nothing since, but one thing we all agreed is that he needs to continue to do films, especially like the stop-motion black and white animation BALADI (which you can see here).

We did realise that actually organising a screening in a place like the studio is not that easy. The space is not that big, although it does make a great little screening room, and so does not fit many people. It’s not like an exhibition where people come in and go out; at a screening people come and (hopefully) stay the distance. So we were a bit uncertain how to publicise it. Among our circle of acquaintance only, or publicize the programme more widely? First come first serve, or by a booking system? In the end we circulated the emails of invitation to our own mailing list only, and we did ask people to book; but they didn’t, they just turned up. We’ll have to devise a better system next time.

We’re planning to do screenings once or twice a month. Andrea will be organising a programme called FLAT SCREENS which will be documentaries and art films mainly focusing on subjects about housing, locality and society. This will start in April for a year. As well as helping with that, I’m going to do more irregular screenings. The next one I programme will be works that involve some form of performativity in the landscape (urban or rural). Haven’t got a date for that. The studio is booking up, we just keep coming up with ideas.

The House on Sadovaya Street, by Gillian McIver

This is my first post, as we opened Studio 75 last week as a space open to the public. Each of us is taking turns organising or curating events. The first show was curated by Nazir Tanbouli, with drawings by Nazir along with Glenn Ibbitson who came up fmr Wales, South African born Jonathan Comerford (hardgroundprintmakers) and Londoner Tom G Adriani. Nazir’s gathering a small but strong group of graphic based artists; tellingly this first show was called The Draughtsman as it emphasised the rigorous approach to drawing all 4 of them have, though their work is very different.

We discovered that the space, which is an old studio flat, holds quite a bit of work with out being cluttered.

Studio 75 doesn’t have any particular style, criteria or school of thinking. We are just going to present what we find to be relevant and intriguing. We want to amke a space away from the requirements of established structures, commercial concerns, academia and the latest fashions in art and mass media.

It is a non-profit, self-funded, non-commercial venture. We have no core funding and don’t intend to get any. We are looking at sustainability in the arts, and in particular we don’t want to be held to anyone’s criteria.

Ourfirst point of concern is getting people to know where we are, and to pop down. Right now we are using the web mostly and word of mouth. You can chack us out on www.studio75.org.uk or on studio75 on Facebook.

Hopefuly you’ll follow this blog and see how we get on :-) 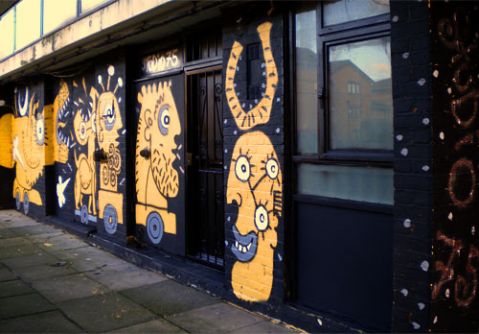 Filmed and edited by Glenn Ibbitson