NIGHT OF THE BLACK MOON

I decided to go back to my roots, working with Luna Nera, and make a site specific project on the Kingsland estate where the Studio is. I called Valentina who cofounded Luna Nera with me and she was totally up for it. I got together a lot of work by great artists whom I know, and we were off.

The event was dogged by the heavy unrelenting rain that is blasting the UK right now – there is no escape and the only alternative was to just cancel. For the foreseeable future the forecast is rain, so no point even in trying to postpone. So we went ahead and did it, and – with the help of umbrellas, big plastic bags and a tolerant audience waiting for us while we flew around with said umbrellas and plastic bags – by the time the sun set the rain stopped and all was dark and magical. It was worth it.

The first piece to be seen upon entering was work by Sheffield based artist Tracey Holland whose work is all about gorgeous, sumptuous images that are haunting and eerie. Made using highly-crafted techniques of photography and video compositing, Holland’s work references cinema but is not cinema, references painting but is digital, harks back to traditional notions of aesthetics but is contemporary and often profound. In NIGHT OF THE BLACK MOON she showed two looped pieces, Carnival of Souls and Golem.

Nearby, a large and beautiful tree provided a natural screen to show two pieces that deal with the human body: Glenn Ibbitson’s piece Consignment and Adrian Shephard’s butoh dance piece The Life of the Fly.

A particularly derelict wall on the far side of the estate acted as a surface for a selection of works that all address memory: Jessica Kolokol’s Contact a dual-screen piece made from old analogue photos; Adrian Shephard’s super-8 film Angels and Brighton memoir Between the Devil and the Deep Blue Sea and Harriet MacDonald’s paper-cut animation Another Year Gone.

The mighty SDNA duo Valentina Floris and Ben Foot brought some of their recent video work 12 Moves, and projected that against the big wall of the tallest block on the estate. A triple-screen fantasy combining animation and live-action, the piece offered endless surprises and delight.

I won’t pretend it wasn’t difficult to mount a show of this size and calibre in a place like the Kingsland estate – which is after all a condemned East London housing estate, not a gallery. And it was outdoors – something I have always said I won’t touch (after doing many site-specific indoor projects). And it rained. But as I said it was worth it. The hard rain came down on cue about 8 mins before we were due to pack up. Everyone flew away; we grabbed the brollies and packed tout de suite and suddenly the estate was dark as it nothing had ever happened there. Dark and brooding, reclaimed by the urban foxes, the estate went back to sleep, 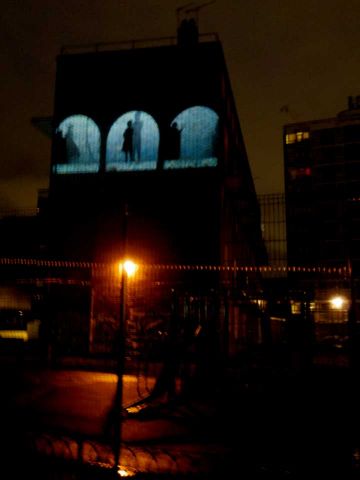