Tatsuko: A film by Glenn Ibbitson

Tatsuko is an extraordinary project, and encompasses all of the prodigious skills and talents that a master of their craft can accomplish. Glenn Ibbitson’s 40-min film is a hauntingly beautiful, dramatically gripping yet enigmatic film that draws the viewer into a world dominated by a strange landscape, where the familiar becomes alien and human relationships are intense yet completely distant.

The story is simple: a hooded man arrives at a remote farmhouse. The artist who inhabits the house, goes about her daily self absorbed routine, oblivious to the dark figure watching her. Slowly he begins to inhabit her territory, watching, waiting. Scuttling away when she is near, yet closer to her than her own breath. Is he real, or a shadow? Is he malign, or a guardian angel?

The film’s cinematography is breathtaking, making the most of both the wild Welsh landscape, and the way that ordinary interiors can be imbued with suspense. In their majestic stillness, the shots breathe the artistry of Antonioni, while the enigmatic yet intense story echoes Tarkovsky.

The entire film was made by Ibbitson, with a magnificent soundtrack by Wyn Lewis Jones. The script, scenography, camera, lighting, editing is all done by Ibbitson, and it is a shock to realise that since before the credit you imagine this is film that took a significant budget and a crew. But no. Having previously made a number of short films, Ibbitson’s status as a master painter can be seen and felt in every frame. Tatsuko, as well as being hugely entertaining, is an object lesson in how that most traditional of art forms, painting, can be a discipline and a catalyst to electrify and deliver art cinema of the highest quality.

Tatsuko the film is accompanied by a substantial published book that can be purchased showing all of the drawings that are integral to the film. The drawings themselves, in a concertina book form, are also available for exhibition.

Glenn is a painter, printmaker, film-maker and collagist. His art covers a broad range of subject matter, but at its core is always a vision, realised through various representational forms, addressing the enigma of what it is to be human. After many years spent as a BBC and freelance scenographer and scene painter, Glenn Ibbitson works as a professional painter and film-maker, based in west Wales.

Glenn has shown work in London, New York, San Francisco, Kyoto and Dortmund. His work is in private collections across five continents.

Glenn is a member of Studio75 and has participated in many of the studio’s projects. In 2011 he exhibited drawings in “The Draftsman”, collages in “Rip it Up!” and “CONSIGNMENT”, a solo show of paintings and prints In 2012 Glenn screened his new film “Tatsuko” and exhibited Tatsuko a collection of drawings connected to (and featured in) the film along with a published book (Nant Studios 2012) of the same name.

Studio75 took a break over the summer. We spent time on Canada’s Pacific Coast, looking at Haida and Coast Salish traditional art and the relationships between art, nature and culture.

Back in London we’re editing the film “Taking Over the King’s Land” which tells the story of Nazir’s huge mural project.

Nazir has been active in the studio with two new series of drawings:

In October we started Open Studio Saturdays. Every Saturday afternoon you can come and visit the studio, see new and old work, buy if you should so desire, and meet the guest artists. Guest artists come and spend the afternoon and draw with us. We have already had Paris based BODO (George Bodocan) in residence, Bulgarian artists KRUM and DESI and we await others. If you are interested, drop us a line or drop by.

On Nov 7th, Studio75 will be welcoming GLENN IBBITSON to the London premier of his new film TATSUKO. Wales-based Glenn has exhibited several times at Studio75 and we are excited to welcome him back with this extraordinary film. More about the film: http://www.studio75.org.uk/tatsuko.html

In other news, Nazir has been shortlisted for the UAL Creative Enterprise Award for “The Kings Land” at Studio75.

Join us on Twitter @studio75london for regular updates, peeks at new work and more. 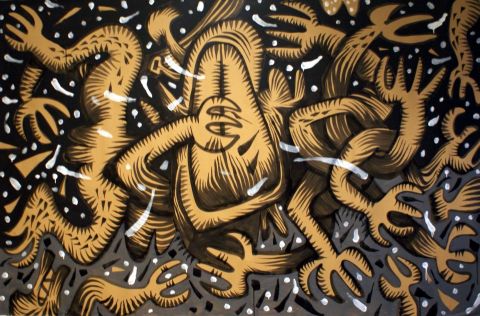