STUDIO 75 is very proud to be presenting a solo show by the painter Glenn Ibbitson.We persuaded him to leave the dramatic mountains and stormy seas of Wales to come to the filthy big Smoke to show us his exciting project Consignment.

‘CONSIGNMENT @ STUDIO75’ is a selection from an ongoing project of painting, print and film on the theme of human trafficking and extraordinary rendition. Boxed, labelled, despatched. Units in batches; humanity as mere commodity.

In this work Ibbitson does not attempt to “document” or “explain” or even to depict what human trafficking might look like. Instead he has sought to explore, through figurative art and film, what the human lived experience of being objectified and commodified might feel like on a basic physical level. Figures in boxes, hemmed in, restricted and powerless, made haunting and compelling by the artist’s mastery of his media.

An exciting aspect of this body of work is Ibbitson’s demonstration of the capability of figurative art in exploring the kind of notions and emotions which words or conscious explanation cannot approach. Painting the unspoken.

We picked Glenn after Nazir exhibited with him at Shoredtich Town Hall and his work stood out a by a mile. His work manages to be both firmly and proudly in keeping with the long tradition of figurative art, yet boldly addressing contemporary issues and mindsets, offering fresh new views on the world around, and inside, us.

Glenn’s work has something in common with Lucian Freud’s, but unlike Freud he’s never bitter or sour; his vision is profoundly humane and even optimistic, in the face of the horrors of the man-created world and the dark psychology of the human mind.

The pieces will be rotated at the start of each day so that the exhibition re-invents itself visually throughout the run. A short film will accompany the paintings. 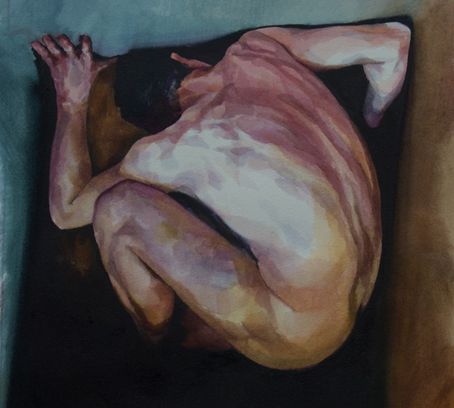 KEEPING AFLOAT is an exchange between Studio75 and La Clinica Mundana Valencia, Spain. Studio 75 hosted the first part, a show of Valencian artists. The show was put together by curators Black Duck, (who is well know for curating international shows and festivals of video art and artist’s moving image) and Red Nomade. The result was show which was an interesting and diverse “snapshot” of current art practice in Spain today.

Talking to the artists, it’s clear that the current economic crisis in Spain is of real concern and is affecting their lives. It’s not just about losing funding; about losing studios, flats, jobs. What was heartening, however, was their determination to refocus, and keep doing art, even redoubling the energy given to art.

Paula Bonet is a young artist who’s currently practicing a version of street art that is simple but works very well for the public eye. Large scale versions of her black and white hand drawn self portraits are glued onto the wall – in the gallery or the street or in the case of Studio 75, both. She then colours them by hand, giving them vibrancy and expression. When she was installing at Studio 75 the local school was just getting out, and gaggles of little schoolgirls soon gathered, exclaiming over the work. The freshness of this “female” approach to street art resonated strongly with the young girls, as well as providing a strong point of interest on the Studio 75 walls. Bonet is also working with combining drawing and photography; simple tools and methods harnessed to a creative and fresh approach.

Daniel Granero, 35, brought a collection of small paintings and handmade artist books to London. These provided hours of fascinated perusal, as each work is so finely detailed and resonant in both subject and technique that the visitors could not leave them alone. The artist works through his influences which range from the prehistoric cave paintings of the local region, to the Spanish greats from Velasquez to Miro, in works which show a deep appreciation for the history (and prehistory) of Spanish art and what it meant, and still means, to be a painter in Spain, examining this legacy. It may be hard for Anglo-American artists to appreciate, since painting has not been a major art form until arguably the 19th century (some would argue not until the 20th). But for Spanish (as well as Italian and French) painters, the weight of history is something that cannot be avoided. (Picasso knew this well, as his many interpretations of Velasquez and other painters attest.) Granero’s own approach is very much rooted in a deep appreciation for the geology and landscape of his region of Spain: his skilful colour palette is drawn directly from the earth, sea and sky of the region. Part of his practice is a kind of landart: he makes objects from ordinary materials, paints them, then leaves them in the landscape to transform and be transformed by it. This process is not so much about “making art” as about exploring the relationship between art and nature, and it finds its way back into the paintings.

Black Duck and Red Nomade put together a show that crosses artistic disciplines, and is brought together by all the work’s concern with the exploration of “lines, colours and shapes”, in different ways. The show counterpointed the “handmade” works of Bonet, Granero and drawings by sculptor Claudia Martinez with digital art by Ima Pico and Cristina Ghetti. Pico photographs street signs and graffiti then reconfigures them into posters and vinyl stickers that disassociate the texts from their original meaning. Ghetti’s hypnotic work is in the Op Art tradition and she uses both digital and painting (acrylic on canvas) as well as digital animation.

As a “pop up” show of works that could be fitted into a suitcase, it gave a tiny glimpse of these artists’ practice, but it certainly showed that Valencia is alive and well as a cultural hub.

Keeping Afloat was chosen by the curators to assert that artists are survivors – and that the health of artistic vision and practice has little to do with wealth of nations.

How do you you promote a small independent artist run space that has no ties to any official organisation, is unfunded and whose members are preternaturally busy with a) making art; and b) earning a living (sometimes by making art and sometimes by making stuff that is not art)??? Big ??? Question.

Of course to some extent the answer is in the Internet: website, blog, this blog, email, listings. But with all the myriad of stuff on the web vying for your attention, how can we be sure anyone ever sees any of it?

The second level of promotion is getting out there with cards, posters, flyers and so on. This is good as it’s really more personal, but it’s extremely time consuming. How to find the time for that? Looking at my schedule, which includes filming and editing a new work with a 29 June deadline, AND having a job, I’m really not sure. My studio colleagues are not much better provided with time.

A few friends have advised advertising for an intern. It’s not a bad idea should anyone actually want to learn promotional skills. But we can’t just use people, we’d need to provide something too. But what? Isn’t that a lot of responsibility? And one of our cornerstones is, we aren’t an institution. Hmmm…

Once again we’ll rely on Internet, and posters placed near the studio. Any other ideas would be appreciated.