I’ve recently re-shot a film I made to improve the footage and incorporate sound. It’s just had its debut at the 51zero arts festival in Medway allowing me to view it critically for the first time.

The new stills are much more effective. I’ve now worked closely with this collage three times — once to create it and twice to video it — and each reiteration of the process improves my knowledge and relationship with the piece giving better end results. Presumably I’ll reach a point when familiarity builds contempt, but I haven’t found it yet! The new footage shows a stronger control of composition and focus. The piece plays with concealing and revealing, offering tantalising fragments of a whole image whilst hinting at the entirety of the whole, uncovering the complete piece only towards the end of the animation. In the first version of the film this didn’t work correctly whereas version two is much more successful.

Experiencing the final film in large scale format in a gallery setting made me feel uneasy. The stills are calm and roll out at an evenly measured pace whereas the sound is unpredictable, harsh, and somewhat jarring. Ultimately, this disjuncture is interesting but it’s vital the sound track is played at the right level so that it begins as subtle background susurration building to a more intrusive crescendo towards the final third of the piece. Most viewers acknowledge the sound as relating to tearing or cutting but the final third of the track has a different nature approximating the whispering of multiple voices. This was neither planned nor intended but suits the feeling of displacement the work strives to create.

The inclusion of sound definitely improves the work.

I don’t know where I go from here. My feelings are that shifting a collage to animation delivers a work of art that’s clearly very different to the original montage — both have their own place. I suspect film will re-surface at intervals within my practice to deliver very specific results in very specific circumstances.

Link to my film 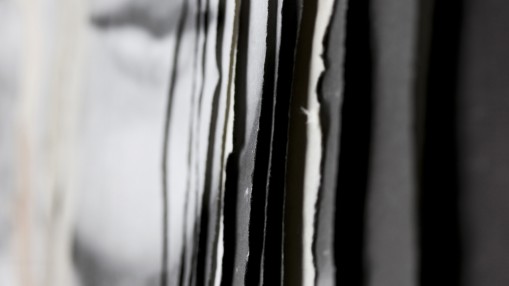