I have gathered plenty of film footage, shot as and when so it spans seasons and weather conditions. I’ve surveyed the entire journey down each side of the train from Marden to London and mapped points of interest to shoot in more detail.

I want to shoot more film in overcast conditions as it gives a cool, misty quality to the light. I’d like to work in heavy rain, perhaps positioning the camera over raindrops. I’d like more footage shot at dusk.

Explore more techniques like panning from track until the inner reflection of the train appears. Try see-sawing the camera across the vertical line. Capture footage that appears still but isn’t and dislocating motion such as the curve round a bend. Uncover interesting stills like this one ‘hidden’ in the mass of footage. 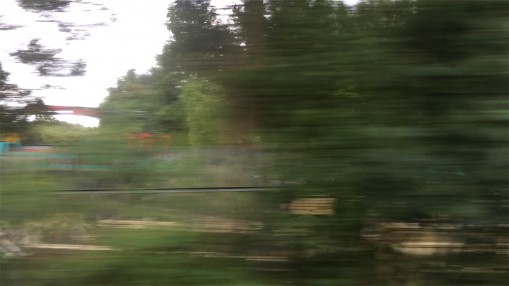 My original goal was to make a series of short films investigating different qualities. I’m already in danger of getting overloaded by the volume of material I have. I need to work in a focused way – concentrate on one aspect at a time and assemble the footage needed into a short film.