Two of AirSpace's studio artists, Bernard and Brian, have been working together to create Head Talks, an opportunity for the AirSpace team to get together and talk about relevant subjects in contemporary art.

On Sunday the 15th July the first Head Talks took place, we planned a walk and a picnic and the rain didn't deter us. A group of 11 people donned their waterproofs and we took a short walk around Consall Nature Park before picnicking in the cars, then gathering together in the Staffordshire Arms pub for a pint.

Here we began the talk; as a group of people used to casual meetings and talking about their art work it was interesting to see the members engaged in a different kind of conversation. The topic of discussion was that of the artist and branding, which is relevant to most of the AirSpace members, within this topic we also discussed definitions of the word branding; branding as a particular style recognised in an artist's work; branding as a form of marketing. The conversation turned to a discussion of our own experiences and situations including worries about compromising our artistic integrity in order to make money.

Also present were Matt Robinson and Pete Smith the artists currently installing the Dizzy Heights exhibition at the AirSpace Gallery. They were invited to talk about their practice and to join in the discussion.

The first Head Talks was a brilliant day, some beautiful scenery and fresh air to inspire the mind before a pint and some good conversation; I can't wait for the next one! 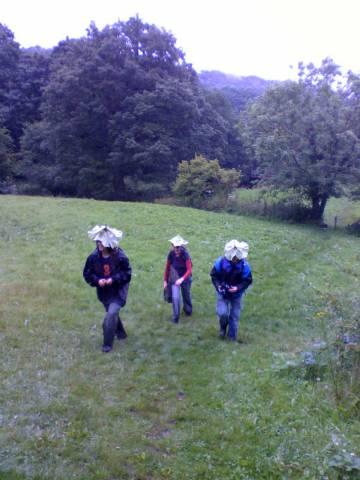 AirSpace, Stoke on Trent's new contemporary art galley, will celebrate its grand opening at its new location, No. 4 Broad Street, Hanley on Friday 20th July. For the occasion we are delighted to announce that internationally renowned artist Paul Rooney will preside over the opening ceremony which will be during a private view of the new show Dizzy Heights.

Prepare yourself to be taken into a different world, a weird and strange place where dream like forms become reality and imaginations can wander unfettered by the everyday.

Dizzy Heights, the next show at Airspace Gallery has brought together two exciting new artists Pete Smith and Matt Robinson, who have created bizarre and wonderful installations whose irresistible allure will challenge your perceptions of reality.

There is something from our childhood memories that resonates in Matt Robinson's work. The bright cartoon like colours and shapes put us at our ease, however on closer inspection we realise that "here be monsters".

Sick Cloud is a giant 3D work made from a combination of randomly collected objects and polyurethane mouldings, which muses on what an ethereal ever changing thing like a cloud would puke up if it could. Matt made the work in a process of what he calls "doodling", the bringing together of "stuff", some which is recycled, in the spirit of play. In this tide of "virtual" vomit we can pick out a seemingly never ending variety of visually entertaining mini-installations, which explode from the stream. In a colourful semi-abstract way these smaller works, some with intricately composed narratives, others which offer witty re-workings of recognisable images and icons, make up a ginormous whole articulating its own unique visual language.

The sheer volume and gusto with which Matt explores the notions of constant evolution and the setting off of themes of utopian visions against references of horror, decay and disgust, leaves us with feeling that a frenzied battle is taking place. The allure and beauty of the colours and fabric of the work draws us in, but once engaged the realisation of the awfulness of the object repels us, leaving a bitter sweet memory of the experience.

Wailing Wall by Pete Smith is, as it suggests, a giant wall, but unlike other walls the function of this construct is to involve us to play. Like Sick Cloud, the wall is made from a random collection of unlikely objects, however this wall give forth utterances. Gently, familiar voices whisper familiar phrases, drawing us in, inviting us to explore and engage. Breaking the usual gallery convention of "please do not touch", we are invited not only to add to the work but to go one further and physically immerse ourselves in the work itself, investigating its interior and ultimately leaving our mark.

From Stoke on Trent, Pete Smith is well known for his unusual constructs having had installations in Liverpool, Manchester, Birmingham as well as locally. Interested in the human condition he creates mechanical surrogates that mimic the mundane patterns we follow in our everyday routines, from the ritual workspace to our most intimate private moments. The impressive scale and size of Wailing Wall allows us to step out of our normality for a while, and through its multi faceted nature invite us to consider other possibilities.

Both these works playfully ask questions about what is normal and real. Echos of Dali resonate in both, highlighting urgent present day questions of environment, politics and aesthetics. These works raise issues of modern day media, image and time and the way these things effect and play upon our very humanity, suggesting an unnerving fragility of our perceptions of the norm. 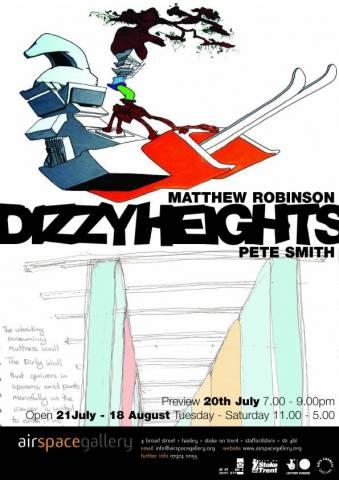 It's a tale of high drama, of battling against the elements, of passionate endeavour, loss and finally an unlikely happily ever after, plus possibly the cutest picture of ducks you'll ever see in your life.

Yes duck, ducks! When Andrew Branscombe and David Bethell the curators of AirSpace, Stoke on Trent's new contemporary art gallery, received the news that they could finally take official occupancy of no.4 Broad Street, Hanley, they were unprepared for the heart rending experience that was about to unfold. Preoccupied as they were with the negotiations of Dizzy Heights, AirSpace's next exhibition, it was only by pure chance that they noticed a small mother duck who had set up her nursery in a disused out-house behind the new gallery. Although the past year of running the gallery in a disused factory at the edge of town had taught Andrew and David how to cope with the most taxing and bizarre of situations, still they were astonished to suddenly find themselves in the role of carers to a mother to be.

There were concerns of what would happen to the chicks once they were born as the nearest water was over half a mile away and across many busy roads. But more intense concerns were raised when despite vigilant observation it was discovered one morning that mummy duck had vanished. Was she attacked by an urban fox which had been seen in the vicinity or perhaps a city cat or stray dog? Whatever it was, she had fled leaving her unborn chicks to their fate.

Operation ‘Rescue' started as David and Andrew hatched a plan. The remaining nine eggs were collected into Andrew's jumper and nestled into a cardboard box in front of a heater in the Gallery Space. The eggs were then carefully relocated to an incubator at Andrew's house and three days later immersed in the organisation of gallery events David received a text message from Andrew: ‘Might be a bit late today Dude, 9 eggs went in a 9 ducklings came out.' And sure enough 9 beautiful ducklings were hatched and squeaking for attention.

But now what? How were they to look after the new arrivals? They had no pond!

Several phone calls later and we are delighted to report that a new foster home has been found for the little uns at a bird sanctuary near Uttoxeter. All are doing well and will be released in to the wild later in the year. A happy fairy tale ending for the Stoke on Trent ducks. 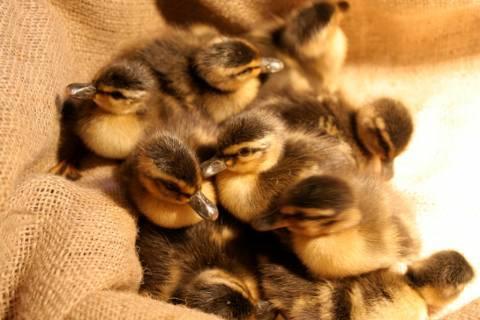