John O’Hare – The Trouble With Monuments

In my practice I appropriate and manipulate familiar objects in order to challenge processes of recognition and interpretation. My work examines the public reception of the artist’s work and its problematic impact upon the determination of the artistic vision. Whilst artistic style and content can be borrowed or appropriated there is still a faith held in the importance of the artist’s work and of their ability to transcend the everyday or have something valuable to impart. The appearance of my work is based on arbitrary decisions with the aim that they will receive their credence and consequence by the viewer, resulting in me playing with the aspirations to meet fleeting judgements of taste that also determine engagement.

The Trouble with Monuments is a play on the classical figure and its display (something often reprised with shop window displays of mannequins); an obese torso complete with ambiguous stains becomes a monument to the larger, fuller figure, yet one that is also characterised by its interpretation as a messy glutton. The desire to impart some truth about the contemporary human body through a figurative work conflicts with being unable to resist forcing an interpretation on something that might be better served by saying nothing. This conflict continues with the materials used to render the plinths and what they support; both the plinths and references to classical style accentuate the metaphor of the plinth and display techniques as things that focus attention, bringing about a dialogue, and with it expectations. 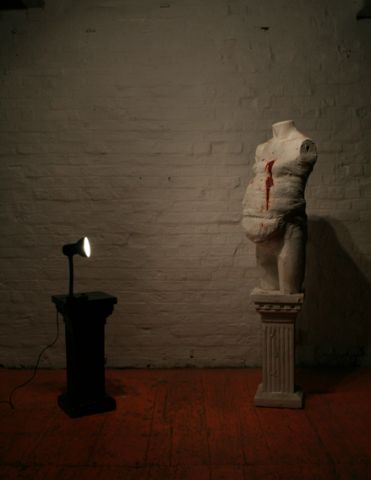 As well as the film was the installation of an interactive clay wall that allowed visitors to touch and manipulate the clay in whatever way they wanted. This was very popular with children visiting the gallery and allowed them to experience the feel of the material as well as creating some of their own works of art above the clay wall. I felt this was an important aspect to the exhibition as the viewers could touch the clay to get a sense of what the artists were feeling and what it was like to use the material.

A striking contrast to the clay wall was the bed of clay that sat opposite the wall. Alexandra Engelfriet created a performance which involved manipulating the clay with only her body and the aid of water to wet the clay. This was very intense as she recreated the techniques used in the Marl Hole film. To be confronted with what you had viewed on a screen and to see how the material reacted in the flesh certainly put things into perspective. Even though the area of the clay which she was manipulating was on a minute scale compared to the quarry, you realise just how exhausting working with such a material in this way is. As the clay become wet and sticky, Alexandra had to fight with the material to free herself ready for her next move. As the performance progressed you could see the fatigue consuming her as well as the material covering more and more of her body resulting in an epic struggle; again symbolising with the pottery industry and the struggles which it faced in its later years being consumed by capitalism and eventually being exported abroad to allow greater profits.

Over all I felt the exhibition was a great success. The aim of the exhibition to confront the traditional idea of clay and its purpose was certainly achieved as well as symbolising the history and industry of the area. Hopefully this will give new hope to the area by presenting the potential of ceramics in the art industry and recapture the enthusiasm of the material that was once felt whilst the Pottery Industry was still thriving.

as part of British Ceramics Biennial, Stoke on Trent.

The concept of Marl Hole was to challenge the traditional ideas and methods that have been applied to clay, and demonstrate a fresh approach to the material whilst using very primitive techniques.

Neil Brownsword, Alexandra Engelfriet, Torbjørn Kvasbø, Johnny Magee and Pekka Paikkari joined forces to make this work possible. The artists visited Etruria Marl located in Staffordshire to embark on both a physically and mentally challenging task, to manipulate the landscape in order to create interventions which demonstrated the history and relationship between the creator and the material. Over a period of just five days, each artist was confronted with the material in its rawest state and had to decide in what way they would alter the landscape to create their piece of work.
The event was filmed by Johnny Magee which clearly shows the strength and determination of the five artists as well as the exhaustion they face along the way. The sheer scale of the Etruria Marl is daunting enough, but despite that the artists successfully created their work whilst enduring the elements and having limited resources.

Johnny Magee manages to capture the emotions and thoughts that the artists experience throughout his filming and this is achieved by focusing on the struggles and exertion that takes place. If the film were to solely focus on the finished pieces, then the purpose of the project would have been lost. It is only when you see the individuals using parts of their bodies to manipulate the clay and the sheer force needed to do it, that you start to appreciate the work on the level that it is intended. The exhaustion felt by the artists is sympathetic to the past workers of the pottery industry by both demonstrating the back breaking work that they would undertake daily and scale of the industry at the time. The fact the Etruria Marl exists from the now extinct pottery industry and that it looked so desolate and empty despite its vastness before the artists arrived; symbolises with the death of the industry and the large hole it has left within the area and its community. 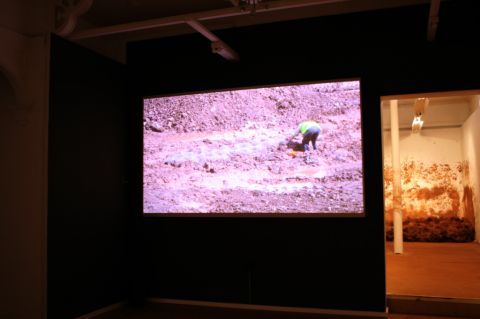 It seems that barely seconds have passed since that time when the world was full of boundless possibilities. A small muddy patch in the back garden might have been the site of a pitched battle between a legion of Lego men and incongruous plastic dinosaurs, or perhaps the space around the bed was a shark infested sea, you are the captain navigating between the perilous jagged wardrobe or the threatening bite of the cracken (usually an older family member in a bizarely patterned Christmas sweater).

Before the rot of tv and national insurance contributions sets in the world is your oyster and a thing of your own creation.

Talk to an average person on the street and ask them to describe what is meant by ‘abstract’ or ‘surreal’ and you might possibly be there for infinity. Now if you were to approach a former pupil of either Forest Park Primary school or Clarice Cliff Primary School at some time in the future and the answer would be there instantly.
For twelve days in each school over a period of around three months, David Bethell, Eleanor Babb and myself have been exploring ‘Strange New Worlds’ through a series of workshops with 7-8 year olds in year 3 classes. The children were put straight in at the deep end with the exploration of surreal and abstract concepts, in order for them to create an environment both distant but somehow familiar to us as viewers. The days of experimentation would culminate in an exhibition of artworks at AirSpace Gallery. Lasting just over a week the exhibition showed a combination of large-scale sculptures, experimental drawing and photography, and clay maquettes; each piece owing its existence to the creativity and imagination of a young mind.

Amongst the works were glimmers of recognisable memories from another time, distant maybe, but in reality not that far away. The power of art to develop a sense of wonderment was evident at the artists’ first viewing of the final curated show. Not only were they seeing their own work in a new light but that of their compatriots from across the city. A spontaneous and almost unconscious critical debate occurred as similar and different themes emerged, and were either praised or derided.

Sometimes it seems as though the creativity of childhood is lost to the tedium of the everyday adult world of MOTs and risk assessments, and the constant drive to formalise what we do. However creating and viewing this work alongside those enquiring minds has shown me at least that that ideal state of mind is still just underneath the surface.