There is beauty in the city

as part of Dialogue Box

after 2 years and consisting of over 200 images sent in by 40+ artists and photographers, there is beauty in the city has become a mini-phenomenon. the little black magnet has been flagging up urban beauty sites from the project base in stoke-on-trent throughout the uk and as far afield as jakarta and sydney.

the exhibition presents all submitted images, each of which represents the respective artists’ unique visions of what they find beautiful about their cities, in the form of a looped film, and set in its own tableaux in the window exhibiting space of AirSpace Gallery.

so, be sure to come to AirSpace Gallery in Stoke-on-Trent to see the first step in what is promising to become a truly global event. 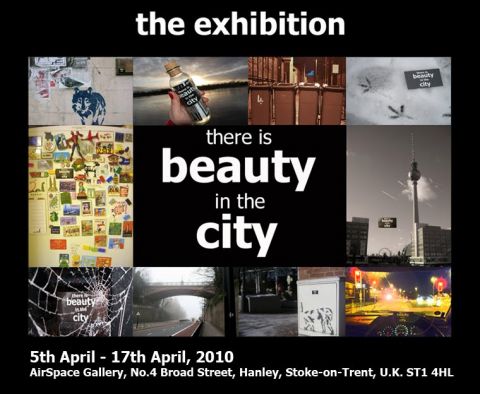 Katie Shipley – If I Write in Yellow

As part of Dialogue Box

Yellow is the last colour in the spectrum that someone with dementia loses.

If I Write in Yellow is a list, something that many of us use as an everyday tool, small reminders of what we have to do or things we have to buy. But this list is full of small, seemingly insignificant, things that most of us would take for granted. The list is written on a pane of glass and describes the area seen through and surrounding the glass, as well as events that might happen as the list is written, such as a person walking by. The artwork becomes a memory, a snippet of a diary in the day of the window, or the person looking through, and exists only temporarily until it is wiped away.

If I Write in Yellow illustrates a desperate attempt to communicate with a loved one. The list, written in yellow ink, becomes a description of life and experience for the sufferer. It visualises attempts to allow a person to remain independent for as long as possible. For the onlooker the list is written backwards, it shows an outsiders view of a relationship between a carer and the person with dementia. A relationship that is not understood by many but may only be avoided by a few. 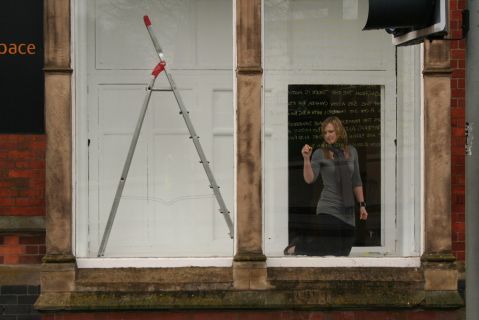 Harminder Singh-Judge includes a sculpture piece in the ”home” exhibition entitled ‘Madonna & Child’. The sculpture consists of an ape cradling a baby ape with a white neon circle surrounding them. Controversial in its content and with the use of this particular title, Harminder Singh-Judge is clear to make a point and not be afraid at stating it with volume. Madonna and Child are normally seen as pictorial representations of Mary with the infant Jesus. Mary being seated and seen holding the baby Jesus is a typical representation produced during the 15th Century in Florence where Roman Catholicism is still strongly followed today. Where Roman Catholicism focuses on spreading the gospel of Jesus Christ, here the artist presents us with Darwinism and challenges the idea of religion and how it shapes society. Representations during the 15th Century of this nature where usually symbolised with the Passion of Christ emphasising the suffering both physical and mental that Christ endured. The fact that the artist chose this particular representation of Mary and the infant Jesus, may be linked to the connections of the Jesus suffering and highlights how we as people are in fact suffering and have no God to turn to as a saviour. It tackles ideas of existential nihilism and plays with notions of meaning and purpose. This could be a revelation from the artist that we are not dictated by religion, but we are in fact responsible for our own lives and should act in accordance. It is clear that the artist wishes to raise questions over aspects of people’s lives that give them comfort and challenge their views. This piece has been created through a process of the artist questioning his identity, heritage and personal experiences of different cultures and gives insight into the struggles which can occur from being linked to a strong religious background.

This exhibition successfully entices the viewer to sample pieces of the artist’s personal experiences of life, personal development and fitting into a particular society or culture whilst remaining sympathetic towards others. The selection of works in this exhibition allows the viewer to see different perspectives and understanding towards Asian culture without it being presented in a biased manner. For those looking to challenge their views, or gain a better understanding of Asian culture and identity, this exhibition is a must see and notable as being one of Airspace’s best exhibitions.

Hetain Patel presents a split-screen film entitled ‘To Dance Like Your Dad’. One thing that is evident from this piece is the artist’s attention to detail and the precise nature in which he undergoes his work. The film consists of a split-screen, the artist’s dad on the left and the artist himself on the right. What starts as a simple idea for a film piece has been developed beautifully by the artist to create a complex and very engaging short film. On the left you see Patel’s father begin to explain what his employment involves and he gives a tour of the work premise and machinery which he uses. On the right you see the artist mimic perfectly each movement and spoken word from his father, emphasising the title and the pressure that may be upon the son of the family to follow in his father’s footsteps. Again this is a piece which explores identity and what impact being associated to multiple cultures can have on an individual. The preparation for this piece has clearly paid off and this film only works as well as it does due to the artist’s high standards. The space which the artist has used to mimic his father’s movements, has been calculated precisely so that he can walk the same number of steps, turn and move in the same way without being confronted with a wall or obstacle or even having to compromise movements due to having a lack of space. For anyone that is interested in art that requires a precise methodical approach, I would strongly recommend seeing this film so that you can appreciate the artist’s efforts fully. Overall it is a strong piece and Hetain Patel is one to look out for in the future.

Chinmoyi Patel presents a sound installation piece entitled ‘B.P & S.P’. A section of wall is painted in vibrant orange creating a sense of warmth and comfort. As you begin to listen to the piece through headphones you begin to hear the artist’s voice as you look at the orange space and a multitude of stories unfold. Chinmoyi Patel is interested in exploring her identity and culture and she does this by taking snippets from reality and adapting them into a fantasy world of storytelling. The story which unfolds is told in sections of no particular order, and as the story progresses each section of the story becomes clearer as you relate to what has been described earlier in the piece. Chinmoyi Patel obviously feels strong about her sense of reality and where she feels she fits into this through how she projects herself. The use of orange that covers the wall, helps to create the warmth that she installs in her stories, but orange can also be symbolised with courage and this is something the artist may be familiar with when asserting her identity and exploring reality through her storytelling. The piece is very descriptive and they way in which the piece is voiced helps deliver a broader understanding allowing a range of people to relate to what they are hearing. Even though Indian culture is at the heart of the piece, themes such as family, relationships, childhood and memories are explored. The change in pitch and pace of the voice telling the story helps to capture your attention and it does give a sense of an adult reading to a child at times, which only adds to the feeling of warmth and exploration of past times. The piece is sympathetic and sophisticated in its approach and gives a glimpse into the artist’s mind and life which she has been exploring.