The current exhibition at the AirSpace Gallery gives another twist to the status of the celebrity. A mixture of smiling and disgruntled faces greets you as you enter the gallery space; familiar faces such as Jade Goody and Victoria Beckham are painted with such bright and vivid colours that they take on a garish and cartoon quality. The faces have been removed from their normal context and transformed into merely portraits, no longer the struggling celebrity their faces and features can be considered without the blaring headlines or ridiculous sub stories of a glossy magazine. The headlines are available as the titles of the work, but by being removed from their usual context they become even more ludicrous and gruesome; a fair comment on the trashy magazines that concoct stories out of nothing.

The backgrounds of the paintings have a still life quality, carefully placed items and stripes highlight or clash with the subject offering further insight and references to Vermeer, with emphasis on the earring detail. Other paintings such as ‘I saw Jack on holiday and I thought; Jesus Christ what did I see in you’ show marks where parts of the painting have been re-painted, or perhaps the whole painting has been re-done. Layers of paint and obvious changes to the arrangement references a restoration process but also points to the change in status when one is considered a ‘celebrity’; what we see is a mask hiding the real person and the real life.

With the addition of ‘A short interview with myself by myself’ we gain insight into the art work, but only as much as the artist is willing to give; without interrogation or awkward questions from an external interviewer. The result is an interesting twist on the artist statement, but without the slightly egotistical language often used in such documents.

Another interesting addition to the exhibition is the piece entitled ‘Confession’, the lonely rant of the artist, who appears to be a little more than pissed of with his current situation, the struggle for ‘the big idea’ and the integrity of the people and artists around him. 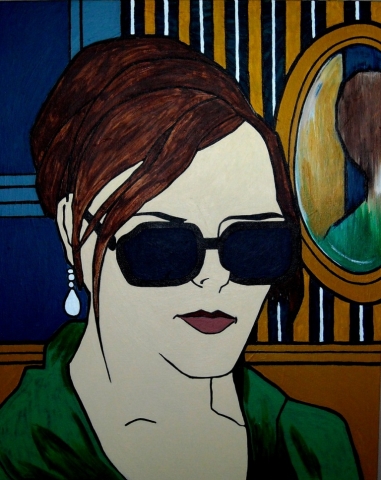 Conjunction 08 is Stoke-on-Trent’s first major Contemporary Art Biennial. Stoke-on-Trent is changing, through the organisations involved in this project we want to ensure this is a change for the better, by ensuring that contemporary art is seen to be at the forefront of redevelopment and regeneration. It is supported by Arts Council England, North Staffordshire Regeneration Partnership, Stoke on Trent City Council, Business Link, Staffordshire University, The Potteries Museum and Art Gallery, AirSpace Gallery, Wren Park and Let Them Create.

The theme of Conjunction 08 is FANTASTIC, FOUND and FAKE, which could apply to much of what is considered relevant in the sphere of contemporary art, from the everyday to the extraordinary.

Conjunction 08 will open on the 8th November across the city and will run until the 13th December.

This years event will include over 40 artists including 25 new commissions by artists of international, national and regional significance.

The Biennial will take place in the city centre, predominately at Potteries Museum and Art Gallery, AirSpace Gallery, Staffordshire University and Bethesda Chapel, there will also be site specific artwork in and around the city centre. To accompany the exhibitions there will be opportunities to attend artist talks, workshops and guided tours of the whole event.

‘Bad Paintings' is the second solo show by the Chester based artist Simon Kennedy. Kennedy returns to show his work at AirSpace Gallery after graduating from Staffordshire University in 2004.

Kennedy delivers work that is blunt yet poetic, he refuses to categorise his use of medium and as such enjoys the freedom of choosing whichever suits his subject. More recently he has been exploring the subject of celebrity, from the nouveau riche to the cursed genius. This, along with an increased desire to further examine the work of traditional painters, has led to ‘Bad Paintings.'

This is AirSpace's first show solely dedicated to painting since opening in 2006. The AirSpace Gallery strives to present viewers with a fair representation of current contemporary art and is excited to be adding painting to its C.V. 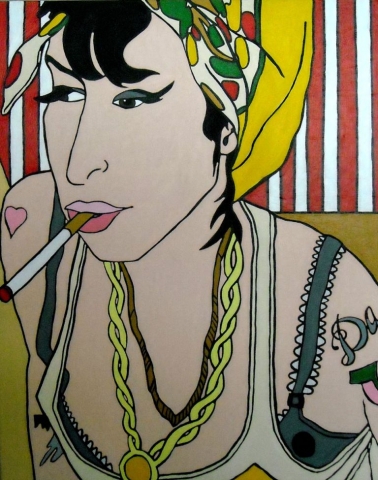 Tales from a Changing City

The opening of the current show at the AirSpace Gallery saw many familiar faces; it’s great to see so many people supporting local artists.

The artwork is a collection of photographs showing the all too familiar scenes of derelict buildings and building sites across the city. Many of the photographs on show are accompanied by a passage of text, highlighting parts of the city and giving a taster of the people within it. The passages vary from discussions of next door neighbours to local barbers, colourful and fun, yet with a harsh reality emphasised by the use of the familiar Stoke on Trent dialect. For me the dialect is hard to take in, I find that reading it out loud helps to confirm a few sentences.

The images themselves have an eerie quality, bulldozers lurking down small back passages and empty shops; one series is taken at different angles giving you the feeling that the photographer has taken the images as he flees from something else.

The images have enhanced shadows and highlights, clarifying the image, almost making them a window into a fantasy world; as if you could reach your hand in a pick up the brick in the image.

We are pleased to present the latest solo exhibition by Swedish artist Johanna Hällsten.

INTERCOM continues Hällsten’s interests in translation, mediation and duration. Through two installations, different aspects of interaction occurring within dialogues will be explored.

The first installation situated within the window will be exploring notions of translation and mediation within the structure of a dialogue, together with the impossible task of inter-species communication.

A sparrow is talking to a badger and a woman. The characters involved are not visible, yet the dialogue itself can be heard through the use of vibration speakers attached to the windowpane. It is reminiscent of a science experiment, where the absurd situation somehow seems plausible because their conversation is mundane.

In the second installation, inside the gallery, the audience will come into contact with PA announcements. The announcements are drawing parallels to their function within the working environment, such as factories, offices and supermarkets. Hällsten is interested in distorting and altering the way in which the audience interacts with the impersonal instructions and messages. The instructions/messages are announced at intervals and fill the gallery space, changing its atmosphere. It creates an intriguing relationship between the lack of visual presence and emphasis on the normally overlooked sounds that the audience themselves produce.

During the private view the installation in the gallery will be interactive and the one-sided aspects of the PA system will be questioned and altered, becoming a direct dialogue between it and the audience. 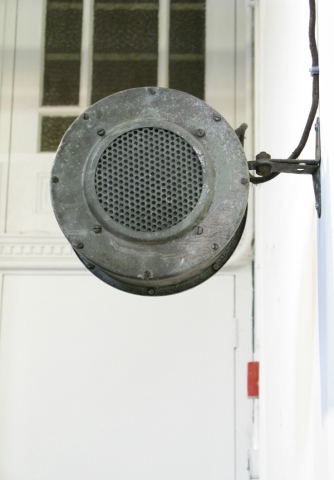