I’ve never seen Dover as buzzy as it was last Saturday. The town council organised a Christmas event culminating in the switching on of the Christmas lights and the roadshow organised by Dover Community Radio kept the crowds entertained all day. I was indoors most of the time trying to knit a bunting pennant as part of DAD’s bunting Forever project, but kept having to jump up and talk to people, which meant I kept losing count of my rows!

Craft is an important element in my work and part of my autobiography – I did ceramics at school and spent many happy hours doing batik work with my mother when we were in Indonesia.

I had a good time on Sunday in the studio and think this drawing is just about finished. I thought it was going into a show but have just learnt that it is not. Boo. 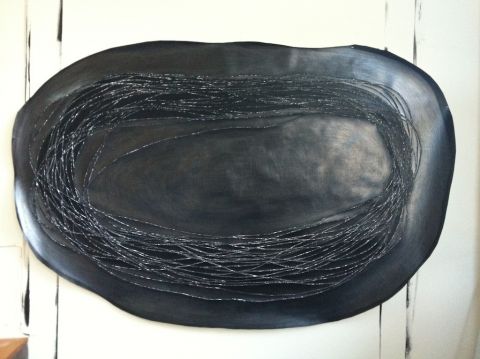 Dog walked; emails checked and no ‘revenue-generating’ work in so studio day here we come.

Day off today – we took the dog to Botany Bay where he ran about on the sand and splashed about in the sea. Had to pop him on the lead when he got a bit too excited over another much smaller dog! Then played a new recall training game I’ve learnt which involves my partner holding the ball, me calling the dog away and then telling him to go and get the ball as his reward.

After that we went into Margate and sat outdoors for lunch and did some Christmas shopping. Amazing to be sitting outdoors at this time of year. Actually managed to sit outdoors eating fish & chips in Margate last night too, after going to see TO PAY RESPECT TO THE GENEROSITY OF THE THREE-MINUTE PUNK-ROCK SONG at Limbo and Crate, curated by Toby Huddlestone. It was fantastic to see so much work in one place. There were just over 40 pieces and apart from the idea of “cultural quickness”, what seemed to link at least some of the pieces was a quirky sense of humour.

I will soon be moving into a new studio. It is full of chairs on wheels and office paraphernalia at the moment and it looks like some of the maintenance lads in the building have been having fun with a nail gun or something. Until it is clear, I am still working in the big, now former, DAD studio making more scratchy drawings. I will be adding graphite next, to this one, and cutting it out. I love working with paper but still have not solved the issue of how best to present the drawings.

Lots of meetings last week, which will potentially result in new DAD projects, which means more bid writing. I am actually hoping to get one completed bid in the post today; fingers crossed that I will get all the info I need in on time.

Managed to get to the studio to work on a large drawing at the weekend. I am about to move studio, which is not a heartening prospect. The new studio will be fine, it’s just the actual process of moving that is the pain. Thankfully, it will be just along the corridor so not really a major move, although I will still need to organise help!

Apart from that all the usual – 2 medical checkups, dog walking and training and worrying about his foot, domestics …

Think it is time to go and see some work!