Hello again Blog, as Franny Swan would say. The first image is a reply to hers of me at the opening of Meeting Room on Thursday where we met for the first time after a long time of following each other’s blogs. I was glad she and Ros were still there as I arrived with husband and father in tow and Joanna, literally after stepping off the huge ladder needed to install The Voyagers http://www.studio308ltd.co.uk/Projects/Projects.ht… in Dover Museum.

The opening of The Voyagers – a fairly exclusive affair – was combined with the celebratory event to mark the actual day on which the Bronze Age Boat was discovered in Dover. So I was only allowed to invite a small number of people, most of whom were there. I was immensely relieved that Philippe Bazin who came over from Paris specially was pleased with the way I had installed his film and actually my whole feeling was one of relief generally at having got it all together in time. I had some fabulous helpers and wouldn’t have managed without them.

I got some great feedback for both shows which has hugely boosted my confidence. Thanks also to Franny for the lovely write up.

As I write, loads of comments have been coming in, in response to mine on Ruth Geldard’s blog, Two Steps backwards.

I will post images of The Voyagers as installed as soon as I have them!

ooh and I nearly forgot Joanna and I both had work in the Meeting Room which was very exciting.

Apart from burying my lovely cat who died very suddenly the night before, I had a great day yesterday. The Boat Cloth is coming on and I think I will get it made on time. My cat will also get a boat made in his honour. I asked people to write down a few comments about the names they have been sewing and there have been at least two other cats remembered. 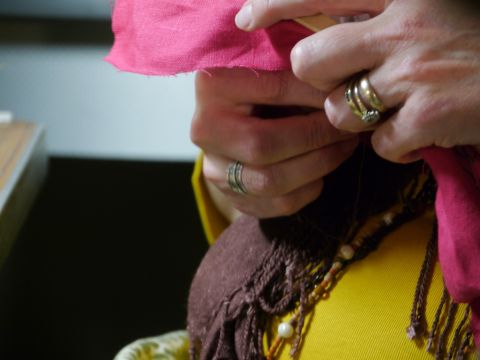 Second and final textiles workshop tomorrow so hopefully I will have lots of embroidered names and can play with the layout together with the participants who want to be involved. I think I am going to unpick what I have done so far … This project is not about control – quite the opposite; as an exploration of the ethics shared making, I am relinquishing control to some extent over the final piece and allowing the form to emerge.

I have had a lovely time in the museum. Fellow DAD director and artist Joanna Jones said it was nice being around me when I was working!

I am stretching myself in all directions though and getting a bit stressed out. I am showing work in Meeting Room in the Sevenoaks Kaleidoscope gallery – opening on 27th and opening of the Voyagers on 28th. October will be quieter …. won’t it? 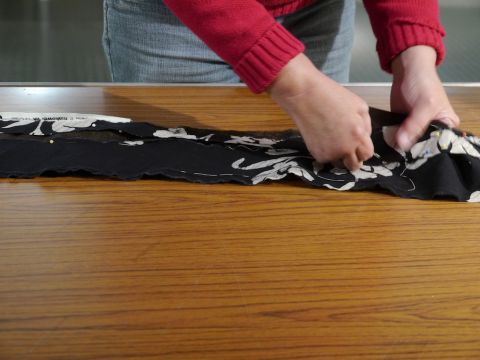 I realise now that the Voyagers project is in essence a self-initiated residency in the Museum. It feels much like a residency with the set amount of time to work in there and with the pressure of having to come up with something at the end, even if that something is still a work in progress.

On that, my boat cloth has been developing slowly. I thought it all looked ok yesterday but now I am worried that it looks like a container ship and wonder whether I shouldn’t just make the patchwork itself into a boat shape rather than make a boat ‘filled’ with names. There is still time to change the concept …. 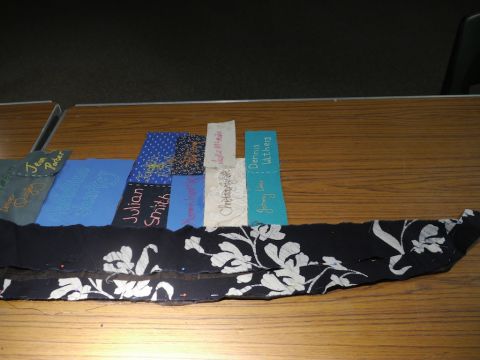 So, the Whitstable Satellite event is over. I mainly had passers by and children making the boats – no-one seems to have read the booklet. I let the children keep their boats but did managed to get a few more for my fleet to accompany Dover’s Bronze Age Boat.

Philippe Bazin seems happy with the idea of his film being shown on a screen placed on top of the boat case. Phew! I wanted to use the little cinema in the museum and thought the curator was just being awkward. As it turns out, the technology is so old that messing with it creates complete mayhem – the lights come on when they shouldn’t and everything gets out of sync. Lesson learned – get hold of the tech guy much earlier and hear it from him; it is easier to understand things if you are told direct.

I have been panicking ever so slightly about the boat cloth but it is beginning to look a bit more convincing now. Not having worked with textiles much or at all, this project is a huge leap into the unknown and I am on a very steep learning curve. However, I am loving using the museum as my studio. It is quiet; I have the occasional conversation with visitors but the rest of the time I can think and make it up as I go along. Making the boat cloth is another way of drawing really.