Very pleasant surprise – having decided to post off my small paintings rather than send by courier, I was pretty stunned to hear that the parcel had arrived the very next day with all the work intact!

Less surprising was the “sorry not this time”notice for Art in Romney Marsh. A shame as I would have liked to experiment with a site-specific paper piece.

I have been having a bit of a break: traditional bank holiday visit to the in-laws. I tried a few more butterfly photos just for the fun of it and played with my camera. I’m trying to learn which buttons to press ….

Very very chuffed: my 3 20×20 paintings have been accepted for the 20 squared exhibition in Middlesborough. So now I just need to get them packed up and sent off.

Today has started well even though I have some nasty and very itchy bites on my leg resulting from a butterfly photography session (without macro lens) organised by Kent Creative Arts http://kentcreativearts.co.uk yesterday evening as I rather foolishly went out without long trousers! Lesson learned. 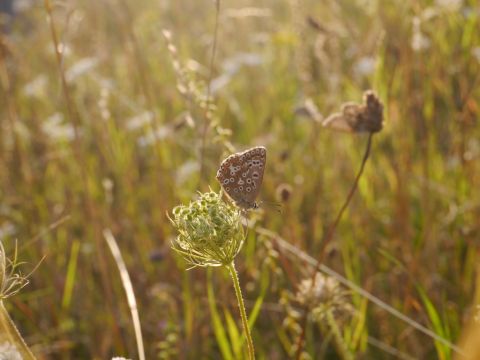 Busy writing another bid having thought it was going to be written for us! How did that happen?

I hadn’t realised my husband’s job was about to end so soon – he has got himself another one so has a 3-6 month ‘stay of execution’. It will be quite strange if he does finish before Christmas. Good thing is there’ll be someone at home with the dog ….

In the meantime life continues as normal; I’ve put in a couple of submissions and am waiting to hear and I am trying to source some more of the Chinese writing paper I have been using.

Sometimes when I either can’t get to the studio or am feeling a bit stuck I browse the web and do some research.

Doing this the other day, I came across the artist Anoka Faruqee and in particular an interview by Liena Vazman called I’d Rather Be Here an Now: The Performative Verb of Painting. The title itself is interesting in that Be could also be performative, referring to really living rather than just existing.

Faruqee is interesting when she talks about gestural pulls and physicality nd I really like this:

My work needs to unravel in the moment to stay alive

Went to the Herne Bay last Friday for the first time in my life to attend the Duchamp symposium:

Every speaker had the same small amount of material to go on and so each talk was like another layer of enquiry and speculation, adding up finally to a sense of what might have influenced the French artist during his stay in Herne Bay, such as e.g. the sash windows, the wasps at Reculver, the slot machines on the Arcade, sewing machines …

On Monday I went round some of the Romney Marsh churches with fellow studio holder Kate Beaugie to research possibilities for a joint proposal for Art in Romney Marsh. By the end of the afternoon, I think we had identified the beginnings of something, so next step is to write the proposal.

I have also been experimenting with painting onto dibond. There are times when I feel I really don’t know what I am doing, that my work is too subjective, that there aren’t enough references to the outside world or to topical concerns … but then doesn’t one in some way process the external through the body and into the making of work?