Went to the fourth installation of Picture / Tableau / Screen: a visual symposium at UCA Canterbury yesterday. Unfortunately I couldn’t go to all of them but did make the second installation as well. The Herbert Read Gallery became a discursive space rather than gallery, a space for a conversation about work that had literally only just been installed. Among the many interesting things, I think it was Tony Mott who said that painters could photograph their work as if it had no context – i.e. one can just reproduce the work itself without showing the wall/support it is hanging on. Interesting to me at the moment in relation to the work I had framed for Space gallery and hung the flaky, mottled wall that they have. At some point in the discussion, Moyra Derby referred to a painting’s need for a wall or support and screws or nails.

Went with Joanna last week to the ALISN conference for emerging art organisations at Goldsmiths. http://www.alisn.org/Goldsmiths-EAO-Conference-201…

The atmosphere was very buzzy and there was a sense of success all around one, though behind that success is obviously very hard work with the artists leading the organisations in many cases still doing their day jobs. Went away with lots of food for thought around marketing and public relations as well as much to ponder on the topic of financial survival.

I have managed to catch up a bit on much needed sleep since taking the show down and have had some real interest from a writer who saw it on the last day, which is very exciting.

Decided to completely rehang my show today to make it more about process and emphasise the fact that it is work in progress. 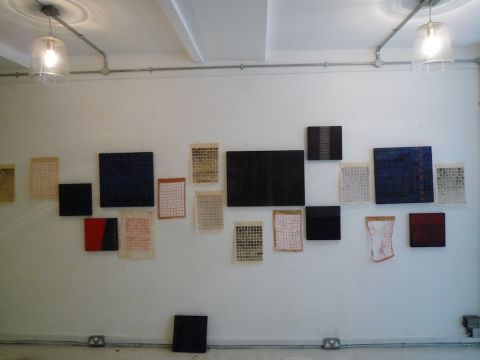 Have had a great week. I’ve been in residence in Space Gallery Folkestone where i am also showing work. One of the first visitors was fellow artist and a-n blogger Jane Ponsford who is planning a lovely itinerant project around Kent, taking in Dover as one of her places. The preview yesterday was well attended and it was lovely to feel so supported! A really old friend came down all the way from Cambridge, which was very special – she said the way I talked about making the work was very much like establishing an argument, which I think it is!

I am also amazingly about to do a work swap with Joanna; I get a lovely painting of hers and she gets two small works from me … (for now).

The show is all set up! It was good to do it over 2 days because on the 2nd day – today – I made some really important changes and think it now works quite well. 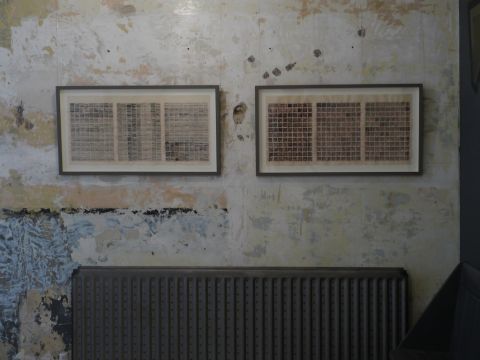 I am showing work next week at Space Gallery in Folkestone. My exhibition was arranged before they switched to being a for hire space, so if anything sells there is a fairly hefty commission! I am turning the gallery into my studio for the period of the exhibition so the work on show will change and the idea is to hang it fairly informally, as I might hang work in the studio to look at myself – the show, as I conceive it, makes this dual role as maker of the work and viewer more transparent.