Shortlisted for Nesta but not through to selection. Still, shortlisted is good.

Had a couple of hours in the studio again this afternoon and finished this piece. Title not yet decided upon. 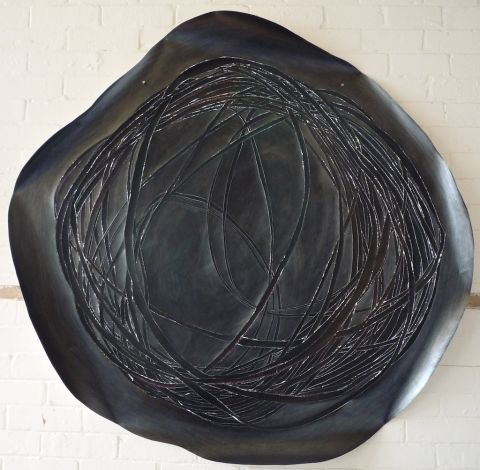 A visit from my husband’s daughter, husband and toddler daughter yesterday was delightful. She is just on the verge of toddling actually and does a pretty fast crawl across the carpet. I mention this in part because the life of an artist is in this respect much like the life of anyone else, even if the boundaries between time off, leisure and work are perhaps more blurred. On Saturday I collected my work from the Stone Space and then had lunch with relatives nearby – took my father along too; he hasn’t been too well recently, so I’ve been keeping an eye on him while my mother is in Beijing. Fortunately he is now on the mend.

Did my first ever “subtitling” of a company video today; a more interesting assignment than the translation work I usually get and also did some DAD admin work – we have just had wonderful news from ACE regarding our grants for the arts bid – we got it!

Braved the pouring rain, went to the studio and stitched together some tears. Am thinking that there is something skin-like about the drawings.

Spent yesterday supporting a pom pom making workshop for primary school pupils as part of the 100 days to go celebrations. The pom poms will be used to create a garland above the entrance to the subway leading to the sea front. Was exhausted afterwards.

My work has always had a relationship with craft in some way or other and I am currently stitching together some of the tears I make. 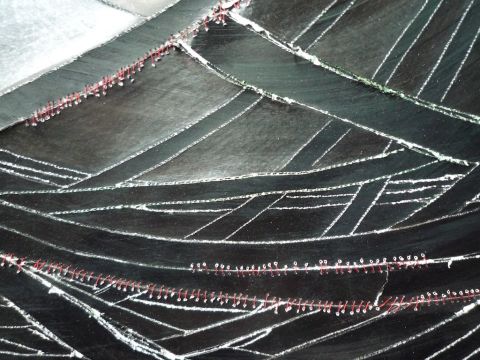 I have just finished my Q4 accounts and sent them off to the accountant, which is a huge relief. Now I have to attack the piles of paper on my ‘relief desk’ which the cats use as bedding along with the laptop.

Spent the day in Calais on Friday as DAD is hoping to take part in an interreg project which could be an opportunity to screen Watermark, our documentary feature, in France. DAD has incidentally been shortlisted for the Canterbury Culture Award for Excellence for “a cultural practitioner or collaborative group of practitioners working in East Kent that has created a new work of high quality within the last twelve months.”

Managed also to get into the studio yesterday and do some work on the new drawing. My new artist neighbour turned up too which was great.

Read an interesting article about the brain in the Guardian, from which this comes:

“In Citizen Kane, the name of the protagonist’s childhood sledge, “Rosebud”, had enormous significance for him. Even if a transplant were physically possible, and a brain with such memories could be transferred to another individual, this word would mean nothing to the recipient because the brain works only in cahoots with the organs: the neural pathways would involve the nerves and muscles that were implicated in the protagonist’s particular reason for memorialising that word. Similarly, the recipient’s functioning store of knowledge and memories would find no pathways in the new organ; even if the brain were able to maintain the automatic processes, it would be a blank slate with no hope of making new meaningful connections. The way information is coded in the brain can only be deciphered by that particular brain.” http://www.guardian.co.uk/culture/2012/apr/13/mind…

The most interesting thing for me is the idea that the “brain works only in cahoots with the organs“. More evidence if any were needed that society has to stop categorising thinking and knowledge as rational and irrational, head and “heart”, science and arts; if knowledge generated through art practice was really one day put on a par with scientific knowledge, that really would be radical. 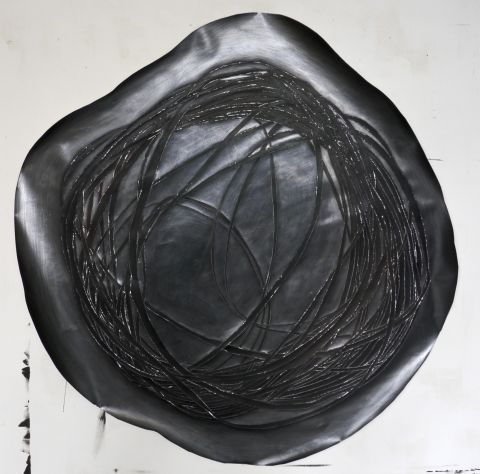 Just back from the studio and my fingers are stiff with cold. It is freezing out there. I had the dog with me and walking him home was enough to get really cold. He is getting used to the studio though he prefers being at home.

Watched Fischli and Weiss’ The way things go at Cratespace in Margate yesterday evening. The projection was done outdoors, which was interesting though alot of the detail was lost so not so good for a first encounter with this seminal work. Words which went through my head in response: absurdity, ridiculousness of things going round and round again … “go” as in work, function, experiment, move, disappear, collapse, break down, fail …

I nearly didn’t go to Margate as I’ve had a really tiring few days, squeezing work in between trips to the hospital with my dad. Turned out he did not have DVT so that was a relief though no one knows what is wrong with his leg. The doctors are throwing antibiotics at it and treating it as cellulitis. Life also “goes.” 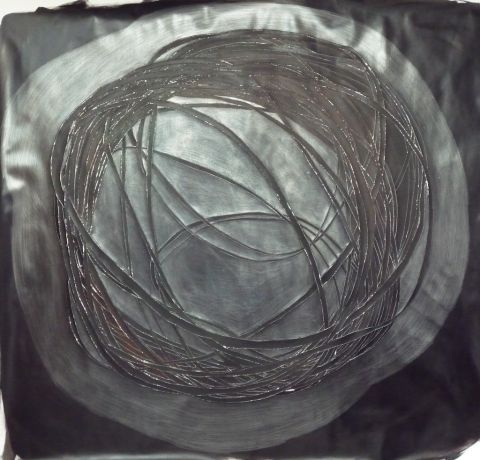