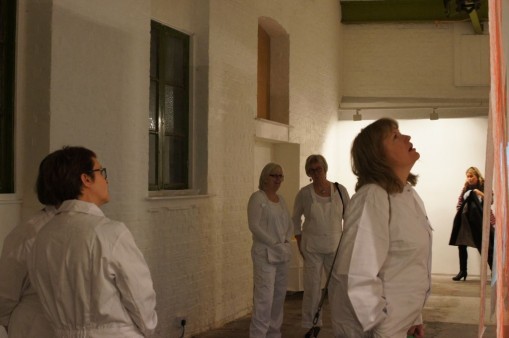 It is always a surprise as well as gratifying when an aim becomes a reality, especially when that aim starts out more as a wish, in this case one stated in my original Arts Council grant application, which was for my Stitched Time project to tour.

Stitched Time, I am pleased to say, is touring to Folkestone where it will be part of WOW Folkestone 2015, curated by Allegra Galvin (The Quarterhouse), Diane Dever (Folkestone Fringe) and Leah Thorn. WOW Folkestone “celebrates the incredible achievements of women and girls and looks at the most potent topics for women today.”

Stitched Time opens on 2 March from 6-8pm with a conversation hosted by Joanna Jones and myself as artist directors of Dover Arts Development (DAD): Empowering the Individual through the Collective:

“it could be argued that neo-liberal feminism operating within today’s model of capitalism privileges the individual over the collective and is disenfranchising women artists by placing too much emphasis on autonomous agency rather than political agency as a group” (from http://www.thewhitereview.org/art/redressing-the-balance-women-in-the-art-world/)

I am really looking forward to where the discussion might go as part of the thinking behind Stitched Time was to explore alternative models of work and in particular collaborative or collective making processes: “The idea of factory-line dynamics and the parallels that can be drawn with collaborative artistic practice, particularly within a specific community and history, was hinted at interestingly.” (Matthew de Pulford)