Continuing on from my last post around the theme of identity, I want to share my thoughts about my latest piece of work, ‘Mirror Mirror’ which was inspired by my sons. I dropped it off this morning, as part of two pieces I’m submitting for an exhibition in the gallery attached to my studio in New Cross.

My sons are identical twins and it felt particularly apt to me for them to be at the pv of This ‘Me’ of Mine last week in Folkestone, an exhibition whose main premise is around identity – and particularly around the changing face of identity through the impact of social networking. It’s a theme close to the heart of the curator, Jane Boyer and a symposium on the effects of social networking on identity has been organised for later on in the year when This ‘Me’ of Mine travels to Ipswich. I’m already looking forward to hearing what the ‘experts’ have to say – my sons are teenagers and spend a lot of time on social networks – and, there’s no denying, I do, too.

To write about what self and identity means for identical twins (and for me as the Mother of them), would be another whole post – and some! But in relation to the ‘Mirror Mirror’ piece I’ve just completed, I was reminded of something significant a worker at a day care nursery told me some years ago. The boys were around three years old and playing in a specially adapted sensory room, with mirrors, coloured lights, music and so on. One of my sons was asked who it was he saw reflected back to him in a mirror, at which point he said his brother’s name. Apparently, when pushed, he was determined – the reflection in the mirror was emphatically not him, it was his brother. I remember feeling quite perturbed by that. How must it feel to not truly perceive yourself as a single entity?

I’ve called the piece ‘Mirror Mirror’ which of course, also relates to the one on the wall into which the wicked Queen asked the question: ‘Who’s the fairest of them all?’ That’s a question in itself for identical twins, given that most peoples’ response to them is that they look ‘exactly the same.’ For the record, they don’t!

‘Mirror Mirror’ has been made especially for Zeitgeist Art Project’s (ZAP) annual exhibition and the title and concept is my response to this year’s title, ‘Discernible.’ A dictionary defines ‘discernible’ as:

Are the two male figures in this piece identical? Are there any distinct marks that differentiate them from each other? Are they discernible? When they look in the mirror, what do they see?

The questions go beyond the visual, of course. It’s obvious but true – because they look the same, doesn’t mean they are the same. They are individual people with their own unique personalities and thought processes. And yet, ‘Are they different in personality?’ is one of the leading questions I’m frequently asked whenever I introduce my sons.

The second piece of work I’ve submitted for ‘Discernible’ is fittingly called ‘Other.’ I have more to say about this piece in terms of how difficult it felt to let it go, what price to put on it and so on. More of that another time, however … 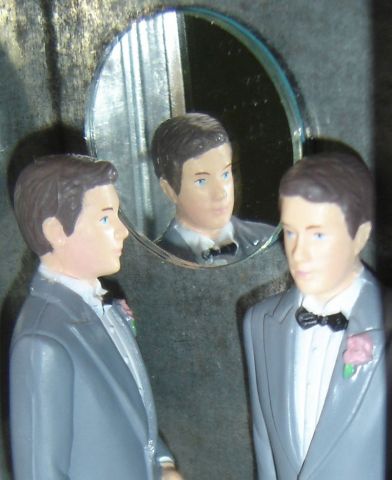 So much of my commitment to writing this blog is also given over to responding to and leaving comments on other artist/blogger’s posts. It’s formed an ongoing, reciprocal exchange and it’s the interactions with others that have contributed to the strong sense of community I’ve felt here, on Artists Talking. Leaving long written responses on Jean McEwan’s blog the other day and more recently on Marion Michell’s, it struck me how much like real-life, two way conversations it felt – the sort I might have over a drink in the local pub. Twitter has sometimes had the same impact.

In the past few weeks, I’ve been thinking a lot about the effect social networking has had on my own creative practice. Eighteen months or so ago, I first made the decision to start a blog, to continue to post images of my art on Facebook and to get involved in Twitter. It’s undoubtedly time consuming and I frequently wonder whether my time might be put to better use. But it’s led me to some amazing, far reaching connections with other artists and more recently, it’s led to being involved as one of fifteen participating artists in an exhibition, This ‘Me’ of Mine, of which identity is the main focus.

The This ‘Me’ of Mine exhibition is a long-running project initiated by artist and curator Jane Boyer. Jane writes about the importance of on-line communication in relation to the curatorial process: ‘I live in a remote area of south west France, so nearly all my communications are done digitally – it is necessary for my daily functioning! However, it also became the structure of the whole project.’

Being a part of the show has meant thinking still deeper about the impact of social networking – the overall premise of this blog after all, is looking at how much maintaining it might affect my creative output.

Yesterday evening I was at the second launch night for the exhibition, This ‘Me’ of Mine in Folkestone. I was struck by how many people I ‘knew’ solely through the Artists Talking blogs and via Twitter. The same applied to the pv night at the APT Gallery in Deptford when This ‘Me’ of Mine was launched for the very first time.

Despite Jane having created a solid, online group identity for us over the past year, it’s the first time that some of the fifteen participating artists had met face to face and had any direct interaction with each other. This in itself fascinated me because, despite Twitter photographs and Facebook images giving some hint of who we are, the majority of us had never properly met. This of course is all relevant and highly pertinent to the main emphasis and focus of This ‘Me’ of Mine – who we are as individuals, how we define ourselves; how we present ourselves on social media, how we present ourselves as artists; how our artwork defines us and so on. How different are we in real life from our on-line personae? How does the on-line ‘Me’ compare with the actual ‘Me?’

And how much of ‘Me’ is affected by those who surround us – by what other people bring to us?

I had a fascinating conversation with an artist recently, the conversation starting with her apologising for perhaps, appearing too forward and ‘over familiar’ with me whenever we met.

‘It’s just that I feel I really know you from your blog and feel like we’re good friends – but then I realise I hardly know you at all!’

I’ve thought about this conversation a lot ever since. Being open and honest and wearing your heart on your sleeve inevitably leaves you more open to the possibility of feeling vulnerable and exposed.

It’s a little late probably, for such ruminating as over the past year of writing about my experience of being an artist, I’ve already shared some quite personal information about myself. Not consciously – it’s just that I’ve used the blog primarily as a space for self-reflection about what it really feels like to be a practising contemporary artist – a relatively new one at that, self- taught and somewhat naïve. My feelings consequently, have often been very much on the surface, leading to some quite frank and personal revelations. I’m not sure yet where all this thinking is leading me but I do know when I’m beginning to tire of my own voice …

Yet again then, I find myself feeling the need to get on with creating some new work.

An artist friend of mine who knows me pretty well, both on a personal and a professional level, reminded me a few weeks ago how much happier I am in myself when I stick to a routine as far as days in the studio are concerned. It’s on such days that the creative work gets done, after all. The work I mentioned here a couple of weeks ago, took literally minutes to put together and despite being composed of just two found objects, is to my mind, the best piece of creative work I’ve made in a while; this in itself, made me feel very happy.

Knowing how uplifted I can feel by the making and completion of new work, means that I do recognise the importance of being in the studio and getting involved in making art on a regular basis. Obvious as it sounds, it’s true – as the saying goes – that the work doesn’t make itself. Keeping up the momentum for being actively creative then, feels crucial, just as having concrete evidence of producing new work, feels equally as important.

So much can get in the way if you allow it to – there’s always some excuse for not quite being able to make it into the studio. Creativity of course, can’t just be turned on like a tap – there are peaks and troughs in even the most successful creative practises. But the mantra ‘just do it’ is one that always returns to me. I’ve come to realise that however uninspired I might feel – however inadequate, bored, uncertain – it’s the keeping it going that’s important. Ironically, the writing of this blog has sometimes contributed to staying away from the studio; it’s easy to convince myself I’ve done an ‘art day’ if I’ve spent some time writing about it. And while I’ve come to accept that the writing to an extent is a part of my artistic practice, it’s equally as important to keep making the work.

And so, in the spirit of practising what I preach, I’ll go and focus my energy on trying to create something new… 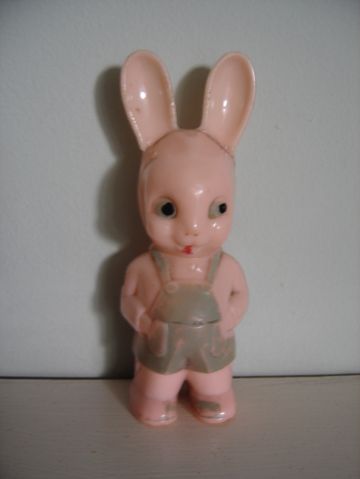