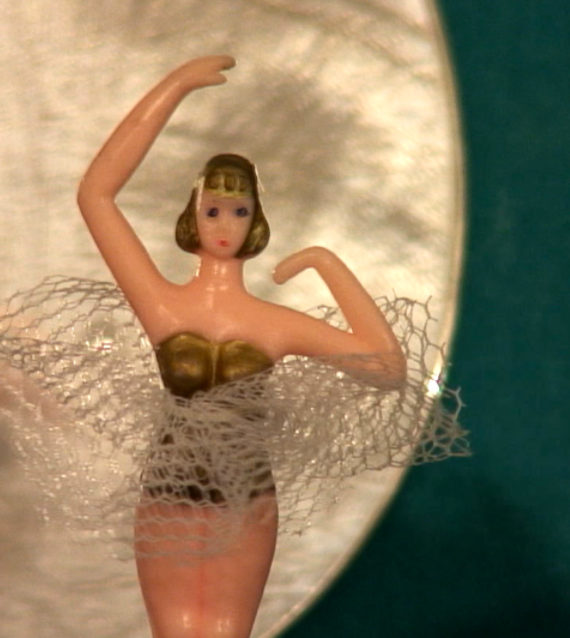 The recent announcement for the latest round of a-n professional development bursaries started me thinking again about the short film that I made with film maker Henrietta Thomas.

‘I Always Wanted To Be…’ was completed at the end of December 2016 thanks to an a-n bursary, but for reasons which I will explain here, I haven’t shared the film publicly until now. The process of arriving at the finished film was a long and complicated journey for me, and I’ve needed time to absorb and think about it.

Some major changes were made in the final stages of editing, largely because I felt that the original narrative somehow didn’t match the film footage. This was no reflection on Henrietta’s excellent filming – it was all down to me and the choices I had made. It was as if I had made two films – one with a fairly serious story to tell, the other working on a purely visual level with its selection of plastic, tacky looking ballerinas in their music boxes. The two just didn’t fit well together.

I realised that by introducing too many threads I had over-complicated ‘I Always Wanted To Be …’ An interview with an ex-ballerina provided me with a deeply personal, moving account of her experiences as a young dancer at the Royal Ballet School. The narrative was so rich, in fact, that it felt like a film in itself. Presenting it alongside the close up images of the ballerinas felt to me like a sensory overload – there was too much going on, too much to absorb, orally and visually.

It was at this point of going round and round in circles and not knowing how to resolve things, that I asked artist Sonia Boué if she’d be happy to look at the film and give her opinion. Sonia is a person I trust and we often share similar tastes and sensibilities in the objects we choose for our work. I also liked the short films Sonia had been posting on line – exquisitely filmed, but slow in pace and easy to follow.

The one I’d produced by comparison, felt a little overwhelming; I was looking for something calmer and easier on the senses. Sonia identified the problem almost immediately and agreed with my analysis that there were potentially two films in the mix. I am really grateful to her for suggesting the music that now features in the final version. It fits so perfectly.

Two years have passed since the film was completed, and now feels like the right time to release it. The entire process from start to finish has been a massive learning curve for me, as well as confirming my tendency to overthink and complicate things. With hindsight, the focus of the film should always have been the actual ballerinas themselves, as it’s these petite, bored looking dancers who were (and are) my real point of interest. All so different, with real personalities of their own – magical and enchanting on the one hand and yet, melancholic and full of sadness on the other. Something about their poorly painted faces – fixed, rigid, expressions, giving them a slightly sinister air as they endlessly rotate; their ‘bad’ hair, cheap nylon dresses – artificial and shoddily manufactured moulded bodies – all contributing towards an overall sense of cheap, plastic tackiness.

I’m still really grateful (and rather guilty) about the amazing narrative so generously provided by Ama Rohatiner. Maybe one day in the future I might get the chance to make another short film around the fascinating things Ama relayed. Thank you Ama! I’m grateful to Sonia Boué for the advice and insight that she gave me, to Henrietta Thomas for her beautiful filming and her endless patience, and of course, to a-n Artist Network whose professional development bursary made it all possible.