I found this fascinating article on the Brain Pickings site yesterday – timely, and relevant to what I’ve been thinking about recently, while in the process of sorting.

One of the most striking things about revisiting stuff from my past is how irrelevant some of it now seems. The passing of time inevitably impacts on our feelings and the emotional attachment we make to items can be considerably diluted.

I’ve been letting some things go in the process, both physically and emotionally – not much, it has to be said, but I’ve discarded a few small bits and pieces that no longer hold any great personal significance for me. It’s requiring time and patience – there’s a deep psychology attached to the art of collecting as any avid collector will tell you; it can actually feel physically painful to part with certain items, I find.

So I’m trying to be gentle on myself – and besides, I don’t have to get rid of anything at this moment in time. Looking ahead however, I know that it won’t be too long before I’ll need to confront the rest of the stuff I have squirrelled away in other peoples’ attics, garages and sheds. In the meantime, I’m following the advice of an artist friend through keeping photographic records of some of the objects I’m finding it hard to let go of. That seems to be helping.

The whole sorting process and thinking around letting go, is taking me back to 10×10. In 2008, I gave up 100 objects that were precious to me for exchange. Since then, I’ve religiously documented every exchange that’s taken place in the various outings 10×10 has had so far. It’s led me to some extraordinary stories and forced me to think more deeply about the whole concept of value and worth.

But for now, more food for thought on the subject of letting go via Anais Nin’s diary musings. I’m not necessarily at the stage I was at in 2008 yet – a point when I felt emotionally robust enough to part with a huge part of my past in the shape of objects (and 100 of them at that) – but I sometimes wonder if I might be building up to ridding myself of more things in the future …

“If one changes internally, one should not continue to live with the same objects.”

In September of 1944, amidst the physical and spiritual devastation of WWII, Nin writes in her diary:

The physical as a symbol of the spiritual world. The people who keep old rags, old useless objects, who hoard, accumulate: are they also keepers and hoarders of old ideas, useless information, lovers of the past only, even in its form of detritus?

I have the opposite obsession. In order to change skins, evolve into new cycles, I feel one has to learn to discard. If one changes internally, one should not continue to live with the same objects. They reflect one’s mind and psyche of yesterday. I throw away what has no dynamic, living use. I keep nothing to remind me of the passage of time, deterioration, loss, shriveling.

And yet we attach enormous significance to objects. But perhaps Henry Miller, Nin’s longtime lover and friend, had it right after all when he observed that “all is change, all is flux, all is metamorphosis.” 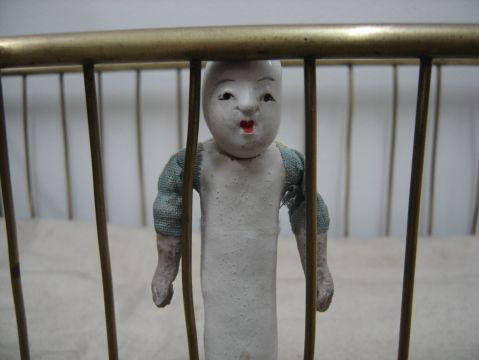 It seems ironic to me that over the past few weeks, I feel like I’ve had everything and yet nothing to say. It’s been three weeks since I posted here, at which point I wrote about tying black gags around the mouths of assorted ceramic figurines. The figurines were all female – innocent and child-like in their appearances – pretty, essentially – to be ‘seen but not heard.’

I had a vague sense of what it meant when I was carrying out the physical act of tying on the gags – ie. in response to the stop domestic violence posters I’d seen in the local area in the lead up to Christmas – but it’s taken time to understand the full significance of why I did what I did.

Retrospectively, I realise that so much of what I wrote about gagging and keeping quiet was symbolic of the way I’d been feeling; the physical act of literally shutting up the figurines was a strong personal statement and is a classic example of how much my emotional life impacts on what I make. Through quite literally shutting the mouths of the figurines and keeping them quiet, I was acting out a desire to stay quiet myself, albeit unconsciously at the time.

That’s the crux of it for me, really – it’s a recurring theme when writing this blog – what to say, versus what not to; what’s important and what isn’t. Certainly, there have been times when, through keeping one eye on the ball of what’s happening in the big wide world out there, I’ve felt that what I have to say just pales into insignificance – and I’ve always been conscious of not wanting to navel gaze, to engage in ‘excessive introspection, self-absorption, or concentration on a single issue.‘ Reminding myself of the recent UK floods, what’s happening in Ukraine at this very moment in time for example, is all part of my desire to keep an eye on the bigger picture, to ultimately keep a perspective on real life, as a practising artist.

Every so often, things seem to stand still and a nagging inner voice forces me to take stock of things, to check in with how I’m really feeling – the life/work/family balance and how to sustain being an artist, in every sense of the word. I haven’t felt particularly inspired in the studio recently, but I’m learning through experience to anticipate these rather barren periods, to accept them and to manage them as effectively as possible – hanging on in there, keeping the faith and so on.

There’s no doubt that it’s infinitely easier to write here when work is being made, focusing more on the process rather than writing about vague, abstract ideas around it.

But creativity, I’m learning, can’t just be turned on like a tap – there are peaks and troughs in even the most successful creative practices. But the mantra ‘just do it’ is one I always seem to return to and do my best to act on – because, however uninspired I might feel, however inadequate, bored, uncertain – it’s the doing it, making the work – that’s important. Back to the studio then, I suppose – fired up at least, with a new idea to experiment and play with.

If it’s true what they say about art imitating life, then the things I’ve been thinking about and experiencing this past week or so all feel pretty timely. The gagging law was passed last Monday evening in the House of Lords. It feels like another nail in the coffin in terms of democracy and I’m concerned about what it means for the future of this country – so many of our rights being eroded away.

Issues around freedom of speech and information sharing have always been important to me – it’s something that often comes up when writing this blog. Though I aspire to edit as little as possible, I’m still conscious of how what I say might affect other people.

And so; how much to reveal versus what to keep to myself – that ongoing tension between privacy and openness – is an ongoing issue. It’s a subject commonly written about here by other artist/bloggers and certainly, I’ve written about and entered into conversations about it on a number of occasions.

It’s manifested itself in my work recently. Last week – the day after the gagging law had been passed in the House of Lords, in fact – I refound some figurines in the studio. In the week leading up to the Christmas break, I tied black ribbons around the mouths of several female ceramic figurines – gagging them, silencing them, putting them in their place – ie. seen but not heard.

The contrast of the black gags against the delicate porcelain, facial features of the figurines was striking and, much like the anti-domestic violence campaign posters that inspired the work, the visual impact stayed with me. The posters put out by the local council in the lead up to Christmas, featured images of a woman’s face; terrified looking eyes, with a hand clamped firmly over her mouth – silenced by a bully. (Of course, we don’t need to think back too far to remember a similar image splashed across our national newspapers).

Even when you’re not particularly conscious of why you’re making certain work, there’s nearly always a reason behind it. The whole issue of silencing (and gagging) has become pertinent for me over the past few weeks as I’ve taken a more thorough, systematic approach to unpacking the boxes in my studio. As I reacquaint myself with a lot of remnants from my past, be it a scrap of fabric, an item of clothing, a photograph, a letter, a trinket, a piece of jewellry, I’m acutely aware of the multitude of emotions contained in a lot of these objects – sadness, grief, joy, happiness; a plethora of feelings, some welcomed, some not. And some easy to write and talk about, and some not.

It’s complicated of course, by the fact that my studio is in an open space – no doors to provide privacy and protection from the public gaze. Some work needs time to develop; I need time to process it properly, to protect the work until I feel it’s ready for public release. Privacy is something I increasingly feel I need, but given my current studio environment as it is – exposed and public – how much of the associative narrative do I feel the need (or even, want) to relay, in any case – bearing in mind, that so much of the material I use in my work comes from such a personal place. 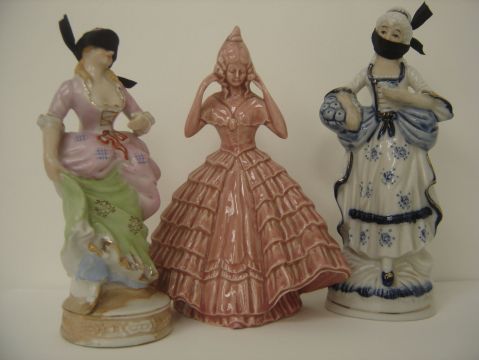