Sometimes the work you think you’re going to make when you get to the studio and what you actually make are two very different things. Wednesday’s studio session was a classic example of this. I produced something totally unexpected, the work influenced and determined by what had been going on around me, the things that were on my mind …

Such as, an article I read recently which reported that David Cameron had given his backing to a proposed £15 million library and museum, planned as a permanent memorial to Margaret Thatcher. And then, a few days ago, a photograph that Tim Stoner, an artist I discovered through Twitter, had posted – a photograph of Margaret Thatcher and Jimmy Savile, suggesting it’d be ‘a good one for the walls’ of the new Thatcher museum. He was, of course, being ironic. 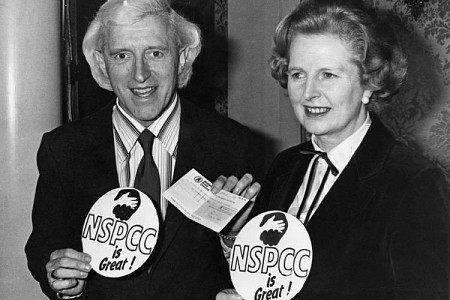 I’d seen a similar photo to this before, but never with the pair of them holding up a cheque and a leaflet with the slogan NSPCC is great! on it. The deep irony of either of them supporting a children’s charity won’t elude you, I’m sure.

Some things just stick – this image certainly did and, as is so often the case, it sparked off memories of all sorts of other things I had forgotten about – objects and other paraphernalia that have lain buried in piles of boxes in storage and all the different emotions and issues relating to them.

The image here, from a print, is one of them. It’s a print that caught my eye as I walked past a local market some years ago. It doesn’t have a title but I can see the name S Pearson and the date, 1970 on the front. I felt compelled to buy it – the girl’s tearful, sad expression reminded me of another print I already had – of a young boy crying, tears streaming down his face. It’s called The Crying Boy and is a mass-produced print of a painting by Italian painter Bruno Amadio.

The Crying Boy print actually hung on the dining room wall of a children’s home I once worked in. I’m going back to the early part of the 1980s here – the interior of the home was dated and old-fashioned and in desperate need of modernising. It had probably last been decorated in the late 60s, hence the age of this particular print. But that aside, whenever I’m reminded of it, I’m always utterly amazed that a print of a young child crying could ever be deemed appropriate to hang on the walls of a care home.

I’m looking forward to starting work on a pile of prints I have of The Crying Boy in due course, but Wednesday was all about the image of a sad looking, young girl. I silenced her by placing a piece of plaster firmly across her mouth, reminiscent of the intervention I made to the china figurines in my ‘Sweet Nothings’ work. I thought a lot about children in care while going through the process of placing the tape across their mouths – gagging them, silencing them, depriving them of their voice.

In the process, I was struck by the contrast of the sweet and innocent appearance of these young ceramic doll-like figures – a huge contrast to the not-so-sweet, disturbed internal worlds of so many looked-after girls in institutional care homes. Like the numerous victims of Savile’s abuse (both girls and boys and adults alike), many of these children felt that they had never had a voice, let alone one to use. And even if they did, the sad reality is that many of them were rarely listened to, or believed – hushed and shushed into staying silent – keeping secrets.

Nearly two weeks have passed since the General Election result. I haven’t been able to think of much else since. ‘Gutted’ is a word I heard a lot in the first few days, describing how many of my close friends and family members felt when the first exit poll was announced at 10pm on May 7th.

Psychotherapist Phillipa Perry’s headline in her recent Guardian article: Traumatised by the election result? caught my eye in the aftermath and her introduction perfectly summed up my own feelings:

‘ It felt like a punch in the stomach when I saw the exit polls. It was a shock. I woke up at about 6am, looked at Twitter and couldn’t stop crying. I had allowed myself to get hopeful and these were tears of disappointment. ‘

Hopeful is the key word here. I too had been excited and optimistic, hoping for a period of respite for my friends working in education and the public sector – respite from increased hours and responsibilities amidst pay freezes, ever increasing erosion of their basic working rights, being denied their entitlement to pensions at a time they expected, and so on. I feel angry on their behalf, as well as concerned for the most vulnerable people in this country who will continue to bear the brunt of another five years of austerity measures.

There has been a lot of rallying round on social media this past week – calls to keep spirits up, to turn despair into hope and to channel anger effectively. Malcolm X, whose words of wisdom I frequently find myself quoting, said this:

‘Usually when people are sad, they don’t do anything. They just cry over their condition. But when they get angry, they bring about a change.’

I’ve been reminded of the song ‘Bread and Roses’ recently, partly through seeing a call for protest songs on Twitter but also through hearing it again for the first time in many years in the film, ‘Pride.’ It was one of those goosebumps moments (you can listen to it here from 1.05 onwards…)

The political statement around Bread and Roses originated from a speech given by American feminist, socialist and labour union leader, Rose Schneiderman at the start of the twentieth century.

A line in her speech, ‘the worker must have bread, but she must have roses, too‘ inspired the title of the poem Bread and Roses by James Oppenheim. The poem was subsequently set to music and although it commemorates a long forgotten episode in American history, the song has become a kind of anthem, especially for the rights of working women, not just in America, but also world wide. Certainly, it was a popular song choice of the Greenham Common Women’s Peace Camp.

Being reminded of the song inspired me to make a new piece of work. And so, on the second weekend since the election results came in, I dusted myself down and made a creative response to my feelings about the Tories governing for another five years. The image above represents the start of a new online visual project. I’ve written a brief synopsis of what the work means to me in the latest section on my website. If you’re interested, you can read more about my own Bread and Roses here:

Such a crucial message: