There’s always room for error when it comes to participatory work and I anticipated that ‘Borrow a Cup of Sugar’ wouldn’t be without. One of two of the mysteries was solved today when I heard from Deborah Burnstone who left a fragment of pottery/china inside a cup. Deborah found the piece on the banks of the River Thames while out filming one day. I’m sorry that I didn’t get a chance to speak with her during the artist’s talk on the last day of the show, but really pleased that I have been able to match up the fragment with her name and can credit the photo below accordingly. 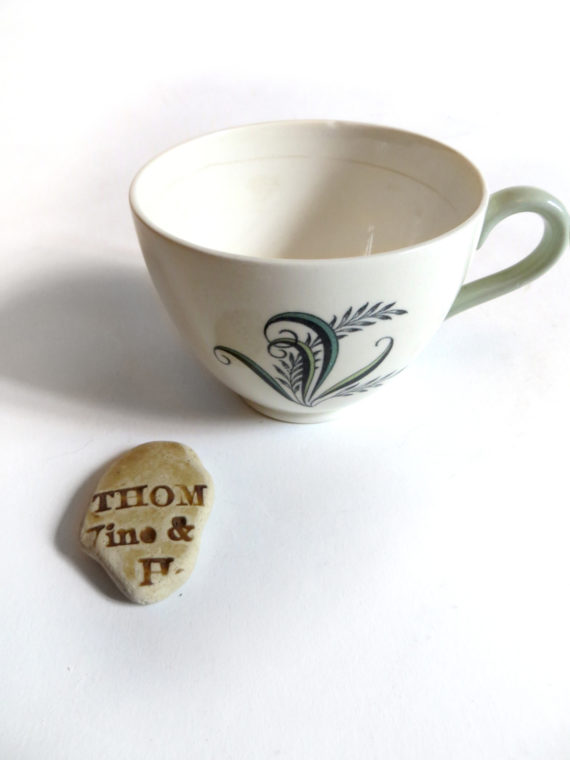 As a result, I’m now curious to know who left the dark-coloured metal coin with a square cut-out hole in the centre, as per the image below. 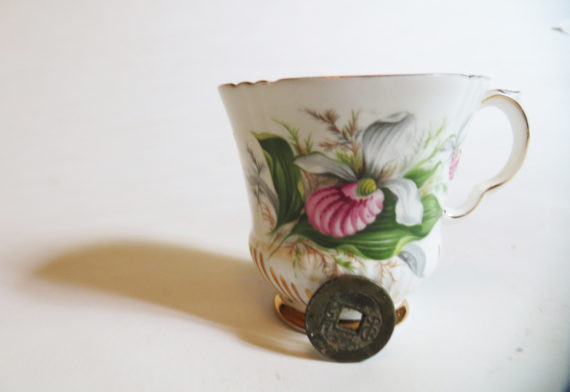 There are still some borrowed tea cups out in the world which may/may not wend their way back to me at some point in the future. This uncertainty reflects the precarious nature of lending – because, despite our best intentions, we don’t always remember to return what we borrowed.

borrow: take and use (something that belongs to someone else) with the intention of returning it

When Jane Boyer and Rebecca Fairman, curators of the group exhibition ‘Something Borrowed’ first spoke to me about the premise behind the show, my thoughts turned to the past – neighbours at the door, often in the middle of baking – hands covered in flour. They’d run out of something or other; could they please borrow a cup of sugar – some flour, or an egg, perhaps – just until they got to the shops, or their Family Allowance came through?

It was a part of family life for me and a way of keeping the lines of communication open between neighbours. There would inevitably be an exchange of information about the news, the weather or tidbits of gossip about one of the villagers while the borrowing/returning went on. And it was of course, an excellent excuse for knocking on the door of newcomers to the area.

There was a strict etiquette about borrowing – if you wanted to be respected, you brought back what you borrowed – that was the expectation and god help anyone who erred.

Being invited to be a part of ‘Something Borrowed’ also made me wonder about borrowing today: how much has the borrowing tradition I remember from my childhood survived? How much has improved access to credit and extended shop opening hours impacted on the need to borrow? And if the tradition of borrowing has waned in any way over the years, has it now gone full circle – through necessity perhaps, in light of the current government’s austerity measures and the consequential effect of living hand to mouth? 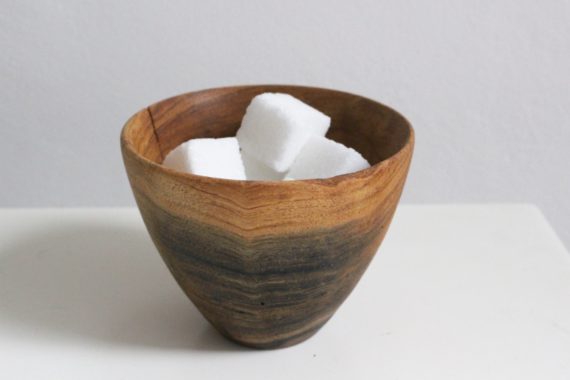 I presented a new piece of work ‘Borrow a Cup of Sugar’ inspired by the theme of the exhibition. It was made up of 25 sugar-filled tea cups, displayed in a cabinet, in the Arthouse1 gallery in Bermondsey, London. I invited visitors and other artists in the show to borrrow, through taking away one of the cups of sugar with ‘… the intention of returning it.’

I also gave people a choice of leaving something in exchange for the borrowed sugar when they brought the cup back – just a small gesture of some kind, to acknowledge the borrowing. There was no obligation to do so – the choice was theirs, completely. 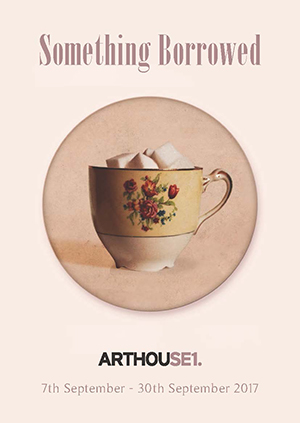 I was curious. How would people respond? Could I guarantee they’d even borrow the cups, let alone return them – many of them rather unique, beautiful objects to my mind. Or, was this going to prove to be a sure-fire way to say farewell to some of the cups from my collection? Participatory events like this rely on an audience – and a ‘good’ audience at that – nobody can ever be sure about how things will turn out, however deep one’s faith in humanity.

But as has been the norm in my experience, humanity and people’s overall sense of generosity and goodness always fares well. This particular case was no exception and people responded very positively. Some amazing, creative items were left in exchange for the sugar, as well as many fascinating stories, told through the personal experiences, histories and memories of those who shared them. A vintage cup with an image of Queen Elizabeth called to mind a beloved grandmother for example, while a pretty, royal blue and gilt-painted cup stirred up memories for another of taking tea with a great-great uncle in his garden, ‘surrounded by hollyhocks and bees.’ This uncle, J E M Mellor, was a renowned entymologist, hence the significance of the bees.

Another story involved the extraordinary lengths that people will go to to both borrow and lend, as relayed by one artist who told the story of her neighbour, who borrowed her internet by hooking a cable out of her window and into one of his. If that’s not the modern day equivalent of borrowing a cup of sugar, I don’t know what is!

It would take too much time to list every single exchange made in the course of the exhibition’s two week run, or to include the entire narrative that ran alongside much of the the borrowing that occurred, but I hope the images presented below will sum up a lot of the amazing ways people contributed. Experience has also taught me that it’s not always necessary to document every single thing that happens and that it’s the overall experience that matters – in this case, experiencing the actual process of borrowing and what it feels like to have temporary ownership of something that belongs to someone else.

Here is evidence of some of the wonderful interactions that took place – all in the name of borrowing.

I’m very grateful to those who participated – all the visitors to the gallery, including friends and other artists, as well as fellow artists involved in the show itself. Thank you for getting involved and participating in such thoughtful and imaginative ways.

Thanks are also due to Rebecca Fairman (co-curator of the exhibition, as well as director of the Arthouse1 gallery) for encouraging people to take part and for helping make the images above look a lot sharper than I ever could.