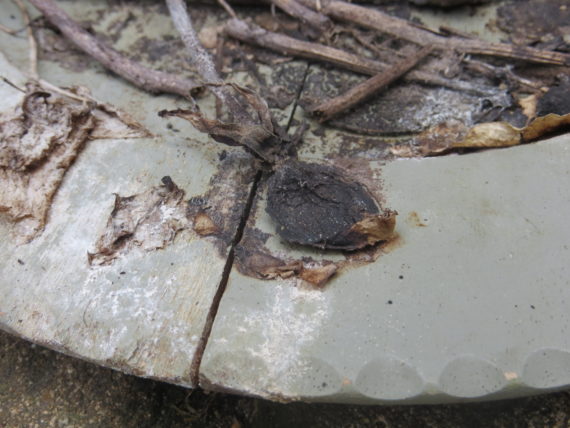 Last week I checked on the current state of ‘Bread and Roses’ , an ongoing piece of work which is encased and protected in a plastic box in my back garden.

I first laid fresh bread and roses on a wooden platter in 2015, in response to the election result of May that year. As the months and years have passed, and the effects of austerity have increasingly been felt, the bread has now completely disintegrated and the roses have all but gone, though their stalks are still intact.

More recently, a small crack that had formed on the side of the wooden platter has got bigger and developed into a definite split in the wood.

Just as the deterioration of the bread and roses reflects the shameful & neglectful impact of austerity, the split for me is symbolic of the deep economic, social and political divides that have worsened in this country over the past few years. Disagreements over Brexit are at the forefront of a great deal of the overall dissent felt by many, while cracks and divisions have grown deeper within the various political parties.

‘Bread and Roses’ has acted as a visual reminder of the consequences of neglect over the past four years and it’s been a fascinating process documenting its gradual decay and disintegration. I’m curious to see what will eventually happen to it and while there’s sufficient space in the garden, I’ll hold onto it – continue to monitor the changes and keep an eye on the split, too.