This Saturday marks my late Nana’s birthday. Born on July 26th 1908, Nana reached the grand age of 102 years, before her death in September 2010. I always find anniversaries a powerful time – a time for reflecting and looking back. It was thinking about my Nana that reminded me I’ve never fully documented a piece of work that I created at the end of last year.

It was called Here Today, Gone Tomorrow, one of three pieces made for a group show, The Beginning of History. I remember this particular piece of work having a strong impact on me when I made it, and looking back, I came across this blog post, written in February 2013:

‘Here Today, Gone Tomorrow stirred something deep in me which needed to be processed.

It was the emotional connection to the objects that touched and moved me. Such intimate and highly personal objects, still here, physically present – in the flesh, as it were – while the hands that touched and used them, left their trace on them, no longer exist.

‘The permanence of objects’ – the mirror, the powder, the make-up, the faded silk flower – and the powder puff especially, for me, so reminiscent of the skin itself – recollections of precious moments spent with Nana at her dressing table.

These physical objects, however battered and used, essentially all still exist, while the woman whose life was so intrinsically involved in using them, no longer does – that fine line ‘between the permanence of objects and the fragility of life.’

During The Beginning of History, the show’s curator, Nick Kaplony, suggested that I might like to interact with one of the pieces of work I had created while it was in situ – to add to and take away the various objects I’d accumulated. In doing so, I would be literally acting out the whole concept of the work’s title: here today, gone tomorrow. I welcomed the suggestion – it appealed to me to have a chance to experiment with my work, an opportunity to keep the work more fluid. These photos document the process better than anything I can write: 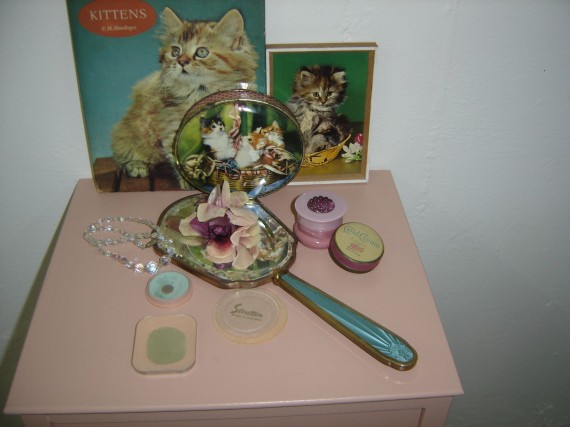 Interacting with the objects inevitably brought me closer to them and what they represented. Memories of a past Grandmother/daughter relationship. Loss. The fragility of life, whatever age you might live to. Small wonder that it touched me in the way it did. It made me want to explore this area further and has led me to creating more assemblages, built around my recollections of the various objects from my Nana’s life – their history, their colours, the materials they were made up of.

One point that’s perhaps worth making is that not all of the objects I use actually belonged to my Nana. Maybe it’s because so much of my recent work has revolved around my Nana’s life, that some people understandably assume that it’s based solely and literally on her and her life.

In fact, although the four items used for Here Today in its initial stage and many of the other objects added at a later date did belong to my Nana; the kitten books and pictures didn’t. I added them as being representative of the kind of thing that any Nana of a certain age and class might have in her home. I’ve been collecting such paraphernalia for many years – way before my Nana’s death, in fact.

Although my Nana is often the starting point for this sort of work, I am always consciously trying to reach out to an audience as part of a shared experience. My hope is that my work will resonate with other people, remind them of their own lives and prompt them to share their own responses to it. That would be a fitting tribute to my dearly missed Nana.