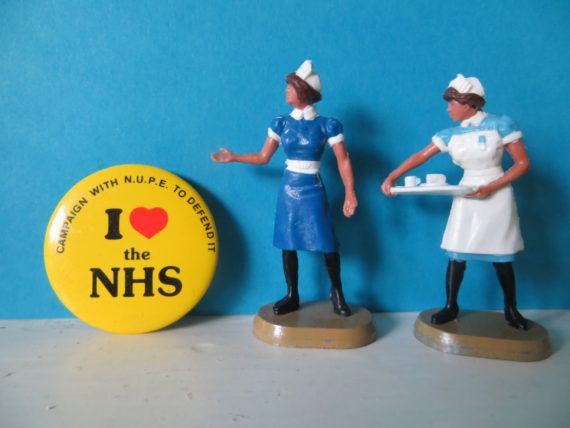 Keeping it going – or not. Plans for the past week have completely gone to pot and I’m trying not to get too down about it. Post ‘Push The Boat Out’ I was really looking forward to getting out and about and visiting some exhibitions – all inked in my diary. And that was as well as getting down to some serious reorganising in other areas – so many things screaming for attention! As it turned out, because of an emergency hospital admission last week, I haven’t been able to get to any of the shows or cross anything off my ever growing ‘to do’ list. I’d gone for a routine appointment, in the hope that ongoing problems with my right ear had started to improve. The opposite was the case, in fact – a persistent infection had really taken hold – I knew I hadn’t been feeling very well!

Back home now and recovering from a surreal few days. The pain in my right ear is under control and I’m feeling a lot better – well enough to write this blog post, for example! I’d been looking forward to using August as a kind of clear the decks time, a chance to tie up all those loose ends – updating my website, reorganising my studio space and getting 10×10 ready for the upcoming Deptford X festival. It’s mid -August already – I’m still not feeling 100% and all the to-ing and fro-ing to hospital means that this month isn’t exactly unfolding in the way I’d anticipated. That said, I’m extremely grateful for the brilliant care I received during my stay at my local NHS hospital – it’s ongoing and I’m very grateful to be in the hands of some very kind and compassionate professionals, all recognising that ears are sensitive organs and earache hurts! I will never take the amazing free health care we have in this country for granted and I’m so indebted to the NHS staff who have helped me feel well again.

So! Patience is the name of the game and as per the Burn’s quote above, plans are made to be broken – you can’t always predict what’s round the corner. My late Nana’s words of wisdom also remind me that ‘your body has a way of telling you when it’s time to rest.’ Though relaxation doesn’t come easily to me, I’m doing my best to give my body a chance to recover – to go with the flow for a while and reassure myself that not keeping it going some of the time is actually, fine.

It’s quieter in my neighbourhood at present – lots of people off on their family holidays – and the recent heat wave means that the usual frenetic pace of London life has slowed down, at least a little. I’m in a state of in-between as far as work is concerned, having just finished exhibiting my work in a lovely group exhibition, ‘Push The Boat Out.’ The show was curated by Harry Pye and James F Johnston, with Amelie Lindsay and included some fantastic work of artists I admire and respect. The entire start to finish experience was really positive and the exhibition definitely goes down in my book as a special one to be a part of. It’s over now, but here are details about the ‘Push The Boat Out’ show via Harry Pye’s brilliant Rebel magazine:

I’m also sharing a short film made by Corey Samuel which for me, perfectly captures the overall energy and vibrancy of the show and the artists in it. Multi-talented co-curator James F Johnston’s musical contribution helps push the boat out even further – all very exciting! See it for yourself here:

Meantime, it’s back to the studio and to thinking about future work and all that that involves. A new challenge presented itself just before the ‘Push The Boat Out’ show began, which will inevitably affect the way my work goes over the next few weeks and months …

My friend has asked me to move my stuff out of her garage as she now requires the space; it’s looking likely that I will have to move out by mid November. I’m really grateful for the space she’s given me ever since we were given notice to quit the ASC studios in New Cross some 3/4 years ago, but all good things come to an end.

And so, I’m faced with familiar feelings – slightly unsettled and anxious, and acutely aware that a move for me is no small task. Far from ignoring it, I have to get to grips again with the reality of the huge mass of stuff I own which, on the last count, consisted of over 100 filled x30 litre boxes. There are also bits and pieces of furniture to think about – the 10×10 cabinet, a dressing table, my Nana’s display cabinet, various bird cages I’ve collected, for example – plus, of course, the inevitable unsold work which I’ve never quite been able to part with.

‘ … never quite been able to part with …’ is the crux of it, really and I know that I’m likely to spend time in the coming weeks fretting about the sheer volume of stuff I own. It’s that guilt thing again which so many collectors experience and will relate to – but something else has crept into the mix, I realise – that of age and ageing – which, much as I hate to admit it, means that schlepping heavy boxes and furnniture around is much more physically demanding and so, more of an issue these days.

Storage more often than not, equals money, hence the need to justify why I’m holding onto the things that take up valuable (and costly) space. If money were no object, my preferred choice would be to simply transfer the stuff from the garage to an alternative storage space. That way, I wouldn’t even have to think about the contents of the boxes and whether I need to dispose of anything.

It’s the thinking that creates the stress for me: how much do I need to re-address what I can/cannot keep? Am I in danger of having to let some things go, simply because I don’t have the space to keep them? – even having to address these issues can make me feel completely overwhelmed. And let’s not forget, while I’ve undoubtedly collected a mass of ‘fun’ daft things over the years, there are a lot of emotions associated with others stored away in the boxes – all with their own unique narrative. I’m more prepared now that the boxes are labelled, but coming across some things can still evoke powerful reactions; opening the boxes up can be akin to opening old, hurt wounds, unresolved issues – the objects acting as pertinent reminders of the passing of time – mortality and the fragility of life.

The recent invitation to take part in ‘Push The Boat Out’, plus preparing for the 10th anniversary of my 10×10 project in September has pointed to the importance of cataloguing and keeping things accessible. Searching for specific objects reminded me how glad I am that I took the time to label them and catalogue the contents of each individual box when I last moved. It was a long, laborious and boring process at the time I remember, but every minute was well spent and has meant that putting my hand on the things I need in the short term has been relatively easy. In spite of the many moves I’ve had to make over the past few years, I’m also glad that I’ve managed to retain the things I wanted to – it’s what makes up the raw material for so much of my work, after all. 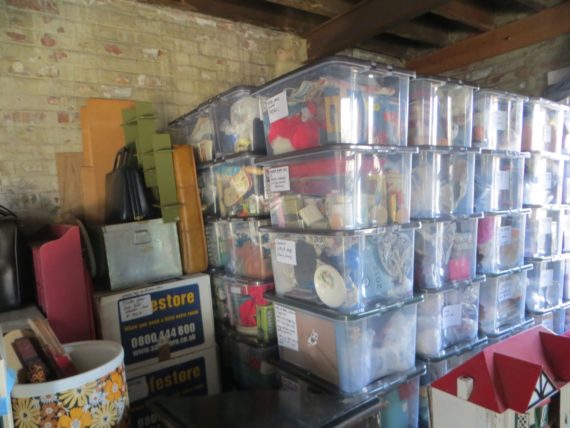 Over the next few weeks, I’m going to have to be giving serious consideration to where I’m going to put the bulk of stuff retrieved from the garage. A large garden shed would inevitably dominate my small family garden, but the upside of this idea is already starting to outweigh the down: to be completely independent of anyone, to have free storage and to have it close at hand can only be beneficial. Commercial storage comes at a price and I’m not in a position to afford it while I’m paying for a shared half of a studio – enough of a luxury as it is.

Someone I know once suggested that I photograph every single item I own before parting with them – that having images instead of the actual physical objects would be just as satisfactory. It’s not a thought I’ve dismissed out of hand, but I can’t imagine not experiencing the joy of being connected with the real thing – something to hold in my hands, gaining a real sense of what it is – what it feels like, what it really looks like, up close – how it smells, etc. But that’s a whole other blog post, I think and I have plenty to be thinking about and getting on with …