‘Bread and Roses’ consists of an assemblage of slices of bread and a handful of roses, laid out on a wooden platter. It has been left, quite literally, to fend for itself since May of last year when a Tory government was reinstated. I’ve documented the impact of neglect on a regular basis in the months since, mirroring the experiences of many people affected by the Tory government’s draconian austerity measures – no nourishment, no nurturing, no care or sustenance.

The decay up until now has been gradual and in line with the amount of time the bread and roses have been left. This week however, has been exceptional – in all manner of ways. Politically, the UK has undergone the most dramatic upheaval for decades. We’ve seen alarming increases in xenophobic and racist attacks. Today, checking on ‘Bread and Roses’ in order to take a photo, I noticed that rain had managed to make its way into the box that normally shelters it from the elements – the amount of rainfall has been exceptional, too. In keeping with the ugly mood of the country, here is how ‘Bread and Roses’ looked today. 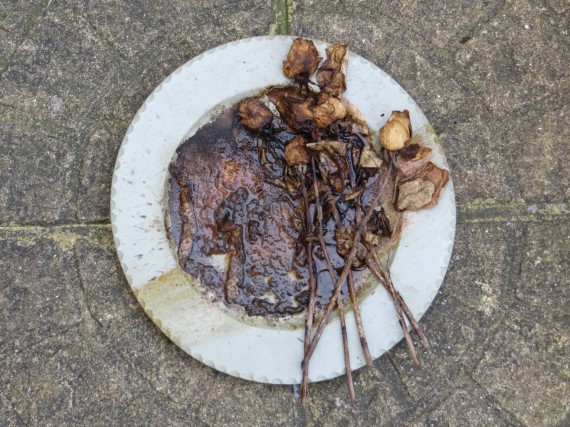 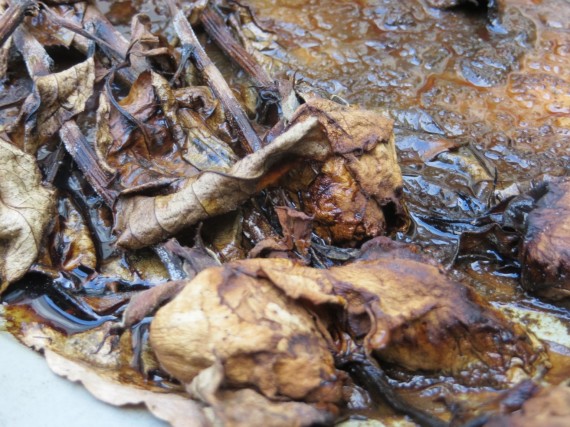 Friday morning, waking up to the country’s majority decision to leave the EU, happened to coincide with a day allocated to be in the studio. It took me a while to settle into doing anything, but it was a good day to be distracted and get immersed in some physical shifting around.

My studio these days is tiny! London rent prices have increased to such a level that I can just about justify sharing half of an already halved space. Having said that, I feel safe there, the natural light is brilliant and of course, I’m acutely aware that I’m in a fortunate position to be able to have studio space at all. I spent a huge part of my time there on Friday, shuffling things around in order to give myself maximum wall space. I’ve been trying to make the most of a bad job, making my work to fit around poor wall surfaces and then getting irritated when looking at photos magnifying the flaws. So I spent some time, polyfilling holes and sanding the walls in preparation for white emulsioning the next time I go in.

I managed to make some progress with the ongoing ‘domestic’ collage/installation work as well and because the studio gallery is between shows, was able to spread the work out and take a really good look at it, something I haven’t been able to do for ages. I also had a rummage through the handful of boxes I brought from the garage – a couple of them specially selected because they contained items relevant to ongoing work, but otherwise, containing random, disparate objects.

I never seem to tire of rediscovering and reconnecting with the many items I have in my collections. These days, things are a lot more sorted and organised and the three brooches, two of which once belonged to my Nana, were nestled in tissue paper in the corner of one of the boxes. Tissue, not newspaper, wrapping always suggests something special and I wasn’t disappointed. The photos don’t do them justice – they’re beautiful! – the sparkle and lustre of what my Nana would proudly have called ‘good quality’ rhinestones was picked up by the sun streaming through the studio window. Frivolous maybe, but they were a welcome distraction from the seriousness of politics, it has to be said.

Just before going to the studio, I had a catch-up conversation with a friend – firstly, about the dreadful, tragic death of Jo Cox and inevitably, about the referendum result. We have both been deeply saddened and affected by both events and our conversation revolved around our anger, upset and disbelief. There was talk about getting the anger out through our respective day’s activity- my friend through some furious digging on her allotment plot and me through making angry art – blood red paint was even mentioned.

Something entirely different happened in the studio, however; being there, calmed me down and gave me the much needed head space I needed. And, as so often happens, things turned up in the sorting process that reflected what was going on internally. The colour blue jumped out at me while rummaging through one of the boxes and seemed particularly appropriate, reflecting my own mood and that of many others up and down the country. 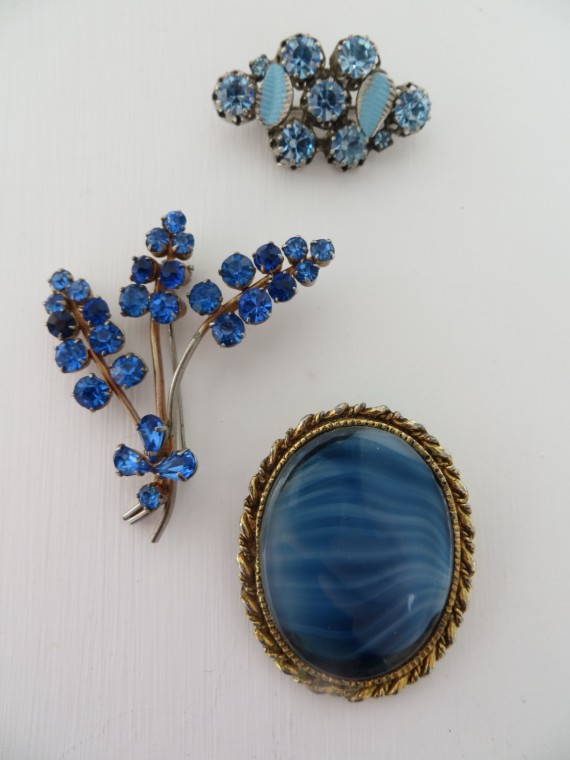 Some pieces of work that are a part of Nana’s Colours have taken ages to arrive at; this small, simple grouping took no time at all. But it’s strength for me, alongside memories of a dearly loved Nana, is its representation of a defining day, one on which we woke up to discover that the country we live in was no longer a part of the EU. That fact is still taking time to fully sink in. In the meantime, a-n news ran their own article, looking at the many responses from various artists. The article can be read here:

‘You can’t take it with you’ is a phrase used by my Mum and her mother before her. It’s true, you can’t, and I’ve been thinking again about the ways in which my work often touches on the fine line between the permanence of objects and the fragility of life

There is a deep poignancy in the phrase, you can’t take it with you – an acknowledgment of one’s own mortality, crucially, plus an awareness of how things survive us, both physically and metaphorically. A lot of the raw material I use to make my work is significant in this respect and one specific object can spark dozens of memories and connections and form the starting point for a whole body of work; ‘It’s The Little Things’ ‘Nana’s Colours’ and ‘Here Today’ are examples. 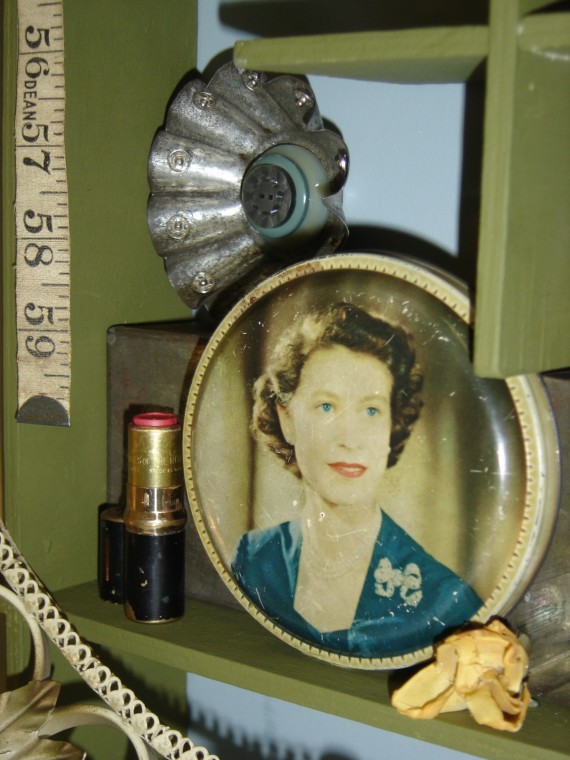 My attention currently, is on a ceramic pin tray, depicting a fox and hounds hunting scene. It was given to me by my Mum in one of her recent de-cluttering moments and reminded me of rediscovering a handful of other hunt-related objects in storage recently. Hunt paraphernalia has always held some sort of morbid fascination for me, reawakened by accepting this recent cast off.

The pin dish had clearly been hidden away; I don’t recall ever seeing it on display in our family home and knowing how vehemently opposed my Mum has always been to fox hunting, I was surprised to see this particular object in the midst of her possessions. Early childhood recollections are of my Mum, by the window in the front room of our house, making no secret of the fact that she found the people gathering in the country lane outside, utterly despicable. Her response to the lord of the manor (seriously!) and assorted wealthy landowners gathering for fox hunting was one of my first memorable experiences of understanding the English class system. My Mum was as equally outraged by the way the gentry were fussed around by the people attending them – their servants, essentially, adjusting their riding hats, helping them mount their horses, polishing their boots – as she was by the murderous element of their sport. ‘Look at them. Who do they think they are – great big bullying men. And just look at those poor young men, kowtowing to them – it’s disgraceful!’

My childhood memories of hunt gatherings and their significance are still sharp; glorifying such a barbaric ‘sport’ in the shape of teacups and saucers, shot glasses, beer tankards, curtain fabrics, etc has intrigued me ever since. Why on earth would you want to drink from a glass that reminds you of a defenseless animal being chased and then savaged to death?

Just as fascinating for me as what my Mum has chosen to keep over the years, is what she has chosen to let go of, this time round. The hunting scene pin tray is a case in point; a seemingly disparate and random object on the surface, but once aware of its personal significance, it’s easier to make sense of why it’s been kept. The pin dish has become symbolic and representative of my Mum keeping exceptional people close by her – her sister, Muriel, in this case, who died at just 42 years of age, some 35 years ago.

The pin dish is a highly evocative object and despite my Mum’s utter distaste for the subject it portrays, holding onto an object once owned by her sister makes perfect sense. I have fond recollections of spending time with my aunt who, just before her untimely death, ran the pub in the small Cambridgeshire village in which my Mum and her siblings were born. It is of course, highly significant that the pub was called ‘The Fox and Hounds.’ 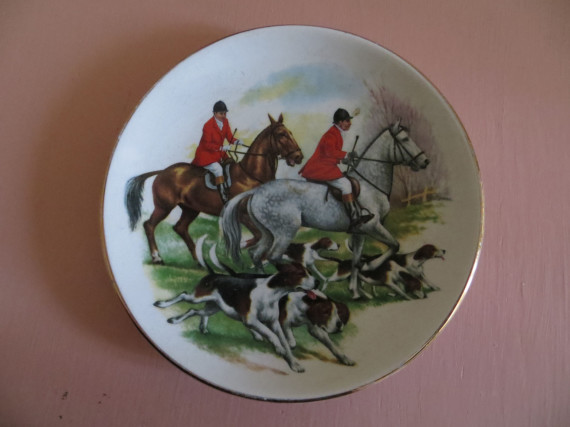 Also highly significant is the act of ‘keeping things in the family.’ It’s infinitely easier to let go of ‘stuff’ we’re emotionally attached to if we know where it’s going – ie. a place where it’s more likely to be appreciated and cared for – and kept, essentially. The newly acquired pin dish given to me by my Mum is imbued with numerous memories – of my birthplace and childhood, of my relationship with my Mum and of course, my late aunt; and of the pub itself and the many family occasions that happened within it. What I eventually end up doing with it remains to be seen, but for now, a bit like that feeling associated with having a new pair of shoes as a child, it’s very much at the forefront of my mind and I’m excited about having it.

For my Mum’s part, the pin tray is symbolic of a considered choice to let something go. Timing is everything. Through taking a last final look at it, sharing its associated narrative and fully acknowledging the memories it evokes, my Mum has allowed those memories to ‘neutralise – to become a part of the backdrop of her existence’ as author Ram Dass eloquently puts it in a section of his book about shedding personal possessions. Dass writes in depth about the impact of letting go in ‘Still Here: Embracing, Aging, Changing and Dying.’

‘Letting go of personal history doesn’t mean denying it’ is another of his phrases that comes to mind – a comforting thought for a hoarder like myself who is currently finding it hard to even contemplate letting things go – and all this, of course, in spite of being acutely aware of the fact that you can’t take it with you.