As I said in my last post here, I’ve been involved in conversations with Elena Thomas and Stuart Mayes about the virtues of long term blogging. Our responses to some self-initiated questions were collated and published online on the a-n platform last week. We had a lot to say between us and one of the questions that didn’t survive the editing was around the subject of the advantages of long term blogging over social media platforms such as Twitter and Instagram. It’s something I’ve thought about a lot.

Writing about my work alongside making it, is something I’ve done automatically over the years. No sooner had I started to make work, I started to write a blog – this blog! The two have always gone hand in hand for me and I’ve rarely made work without writing about it. More recently, I’ve wondered, if I had my time again, whether I might have done things differently – said less about the work I’d made, allowing an audience to make their own interpretation of it?

I used Twitter as a way of promoting my work and getting it ‘out there’ and then, when Instagram was introduced, used it as a means of presenting images. Words were less used when using social media and images of my work stood alone, with very little background attached.

It clearly has its place – Instagram is massively popular with artists and has become the main platform for showcasing work for many. But Instagram, as the name suggests, is about instant gratification – see it, clock it and move on. Twitter is similar – a bit more room for comments and interaction but in today’s ever changing, fast and furious pace of life, even short exchanges about the work are becoming more rare. There is no doubt that social media platforms have their merits, but for me, personally, I wonder how much I actually digest in the midst of such a fast-paced whirlwind of images? How much ‘stays’ with me – and how much satisfaction is gained from the images alone?

Some would argue that good art stands on it own – it doesn’t need the trappings of explanation behind it to make it worthwhile. There’s undoubtedly a lot of truth in this – quality will always out and exceptional work, always stand out. But what about the pleasure of actually engaging with art – properly engaging – and understanding at least a little about the concept behind it? For me, personally, it’s infinitely more interesting to know something about the artist themselves and the thinking behind the work they create.

Perhaps this is the reason I was drawn to blogging in the first place? Sharing my work with others feels important to me as an artist and regular blogging over a period of time has opened up opportunities for conversations and debate around my own and others’ work. It’s provided a source of dialogue and mutual support and has meant being a part of community in which it’s been possible to exchange ideas and share points of concern ranging from very real issues such as feeling stuck and unmotivated to a more mundane question such as which type of glue to use.

I’ve gathered a pretty intensive record of being a practising artist through maintaining a blog here and doing so over a sustained period of time has allowed room for reflection. It’s meant that patterns have emerged that would otherwise have been overlooked, enabling me to reflect on what’s important and to recognise recurring themes running through my practice. Information about the work, the thinking that went into it beforehand and some of the emotions that came out during the actual making of it – it’s all there. Aside from maintaining a day to day diary, I can’t think of a more thorough way of keeping an account of all the effort and energy – the highs and lows, failures and successes – that goes into being a practising artist. 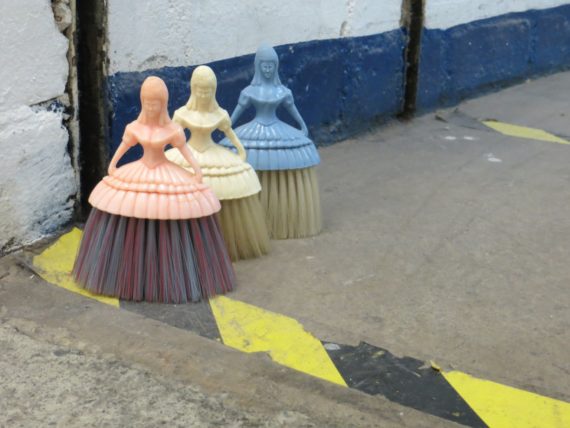 It’s nearly five months since I’ve written here which means that it’s five months since someone responded to one of my tweets in which I  promoted my last blog post, alongside the image above (a detail from my ‘Sweet Nothings’ work). Someone I don’t know responded by sharing an image of their own next to mine, the implication being that what I’d posted was crap. It wasn’t clear whether they were referring to my work or what I’d written – no matter, really – everyone’s entitled to their opinion. But what did matter to me was that, out of all the blog posts and images I’ve ever posted and then shared on social media, criticism of this particular one, got to me – and hurt! It came from a deeply personal place.

I did my best to follow advice from the small handful of people I confided in – to ignore it and not give the perpetrator the satisfaction of knowing they’d upset me. My allies were right, I’m sure, but it’s hard to escape the absolute glaring irony of this situation: that work addressing the serious issues of young girls and women being silenced and discouraged to voice their opinions should be met with my own! And so, it feels right to at least acknowledge the comment left on Twitter, if only as a point of reference and to draw a line under it. This space has often provided me with a place to park things and move on.

By complete contrast, I’ve been involved in positive conversations with other artist bloggers, Elena Thomas and Stuart Mayes, over the past few weeks. Elena and Stuart, like myself, have been contributing to the a-n blogging platform for a number of years. In the midst of a massive house move, I’ve been grateful for sporadic snatches of communication with them and the opportunity to reflect on what writing these blog posts has meant (and continue to mean) to me, personally and we three, collectively. It’s led to some interesting questions and responses and with the help of Stephen Palmer, a-n Artists Network has just this week published an online Q&A article derived from these conversations. We celebrate 33 years of blogging between us and the article has prompted a number of comments from other long term bloggers on the a-n platform since it went online. Rob Turner is one of them and his comment caught my attention:

‘The original a-n blogging platform was a nurturing safe environment for artists. People wore their hearts on their sleeves and much valuable capitol was gained from that.’

A ‘nurturing safe environment’ is exactly what the a-n blogging platform has been for me and I’m pleased to be able to share this Q&A article below, outlining my own and Elena and Stuart’s individual take on the benefits of long term blogging. It speaks volumes I think, about the huge advantages to be gained through being a part of the a-n blogging community, both past and present. Some conversations have already come out of it – our hope, collectively is that there might more to come.