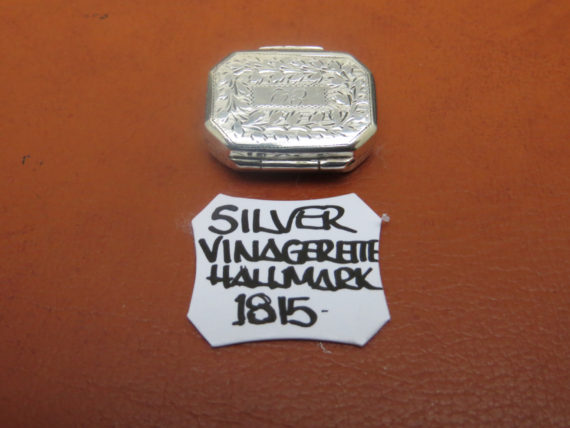 I’m delighted to say that there’s been some exciting news about my ’30 pieces of silver’ performance event. The owner of the genuine piece of silver, one of the 30 pieces given away on February 22nd at the opening night of the ‘In The Future’ exhibition, has been found! To put it into context, this is what I wrote in a blog post at the start of March:

The theme of value and worth is very much at the core of my work, and the idea behind ’30 pieces of silver’ was to explore that concept in a real life situation. I therefore used part of the budget I was given to buy an actual, genuine piece of silver. It was an antique 1815 hallmarked vinaigrette (a sort of miniature pomander, which used to be filled with smelling salts or perfume, so that it could be brought out and sniffed when confronted with foul odours).

It excited me to see it nestled amongst the other items on the salver, unidentifiable to the untrained eye as something ‘worth’ infinitely more than any of the other 29 objects. Would people recognise it for what it was? Would it be the first item chosen? And if so, would it be because of its monetary value, rather than its aesthetic or emotional appeal? Or would it be taken by someone who had no idea of its value and simply liked the look of it?

Alongside the curator of the show, Rosalind Davis, I had been putting the word out in an effort to track down whoever it was that chose the antique vinaigrette; last week I finally found her! I met artist Alison Turnbull  (a participating artist in the ‘In The Future’ show) for the first time last week at a gathering at the Collyer Bristow Gallery. She told me how she’d been meaning to get in touch to say that it was her who took the vinaigrette – and that ‘liking the look of it’ was exactly the reason she chose it. Alison told me that she was attracted to it as ‘a small container’ and that its compactness appealed to her.

I’m delighted that the piece was chosen by someone who values it as an object of beauty, rather than for its financial worth – or even by someone who failed to appreciate it at all (as could have happened) and simply discarded it as rubbish. That scenario was a risk I was prepared to take; there’s always an element of risk associated with participatory work.

Incidentally, some people have asked how the people who got the opportunity to select something from the silver salver were chosen. The answer is that it was completely random. I hired actor, James Haslam, to distribute the silver: his remit was simply to approach people on an ad hoc basis, remove the lid of the salver and ask them: ‘would you care for a piece of silver?’

It was important to me that the person distributing the silver was unaware of who anyone was in the Gallery on that particular night. I didn’t want any favouritism being shown! And to make sure that the whole thing was completely above board, I didn’t even tell James that one of the pieces amid the 30 was actually a real, genuine piece of silver. The only person I let in on the secret was the curator, Rosalind Davis, as part of my initial proposal for the event – although I didn’t even tell her which piece was the genuine one!

James didn’t engage with the audience other than to ask them if they would like to select an object. His presence caused a bit of a stir: ‘What’s with this guy?’ somebody asked me, before approaching James himself to see what was going on. Other people gravitated towards James and hung around him in the hope that they might get a chance to take part, while others took their chance to help themselves to a piece while James was in the process of offering the salver to someone else.

There was a massive gathering of some 400 plus people on the opening night and navigating his way through a vast crowd was no easy task. James’ vast experience as an actor, however – plus many years of dealing with a diverse, general public, meant he did an excellent job.

Unsurprisingly, trying to locate 30 pieces of silver distributed among over 400 people also proved challenging. But there’s been a steady trickle of responses from people (and some lovely images sent in of some of the silver objects in situ in their new homes) since February 22nd when Rosalind and I started putting out calls, asking people to let us know if they’d taken a piece of silver away. with them on the opening night. To locate the owner of the vinaigrette feels like the icing on the cake!

Thanks once again to everyone who participated in ’30 pieces of silver’ – to James who served the silver with such grace & style, to those who sent images of their claimed silver in novel, in situ places – to the curator, Rosalind Davis for her support & enthusiasm for the idea and of course, to the Collyer Bristow Gallery itself whose financial support enabled me to create a completely new piece of work.

‘No Place Like Home’  – as part of the ‘New Narratives’ show at hARTslane New Cross Gate, London

I can never take it for granted, but each time I’ve presented a new piece of work which depends on people participating, they’ve done so in positive and thoughtful ways. ‘No Place Like Home’ is a case in point.

I asked people to respond to a ‘tower block’, uninhabited and stuffed full of fake money, representative of the many that have started to saturate areas like New Cross and Deptford. I invited people to take away the money and bring back something in exchange. The aim was to make this tower block a real home; strip it of its financial assets and transform it into an object of beauty, with heart and soul at its core. I hoped that people would fill it with things that they felt make a home a real home, rather than it being yet another investment unit. 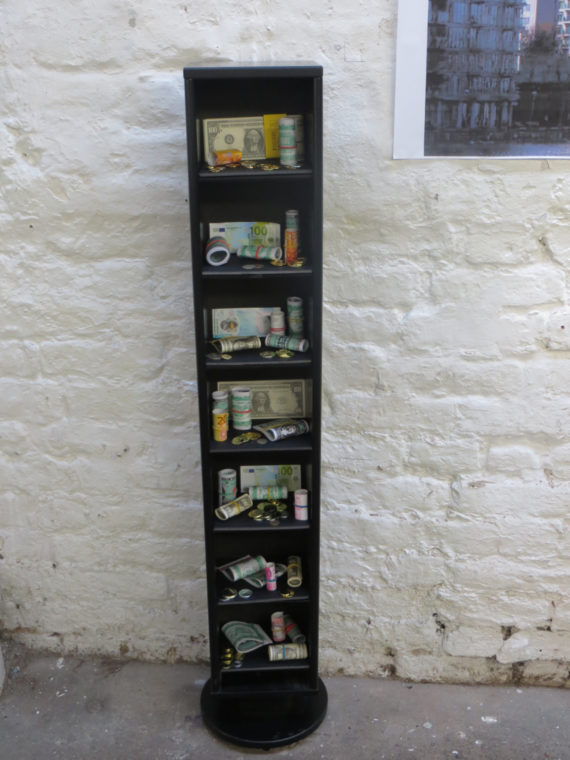 Sure enough, by the time the exhibition was over, plenty of fake money had been taken and more than enough objects had been left behind to transform the tower block into something more homely.

Many of those visiting the show at hARTslane told me the stories associated with the objects they left behind. Their stories added to the feeling of creating homes as real homes; objects and the conversations around them put the humanity back, transforming the soulless cash cubicles into places of warmth, with heart, soul and conversations at their core. It was interesting to hear a fellow artist at the artists’ talk, speak about the cubicles of the CD rack as ‘rooms – giving us insight into the lives of those who resided in them.’ 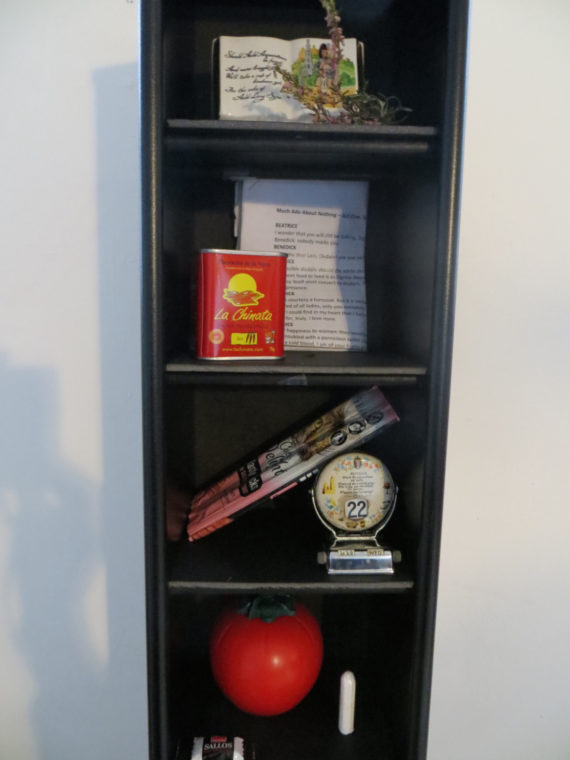 Pets clearly had strong associations with home, as several items such as photos of dogs and cats as well as dog toys, bones and cat biscuits were left behind. And there was an emotional parting with a collar which had belonged to a recently deceased beloved pet dog. Other objects left in the tower block spoke for themselves: there was an emphasis on home as a place of peace, rest and respite in the things that were left: food items, candles, beautiful fabrics, plants & flowers, herbs & spices – the aesthetic, comforting aspects of home represented in them. There were also items making references to children, filling the homes with love and laughter, hope and optimism, as one person told me. 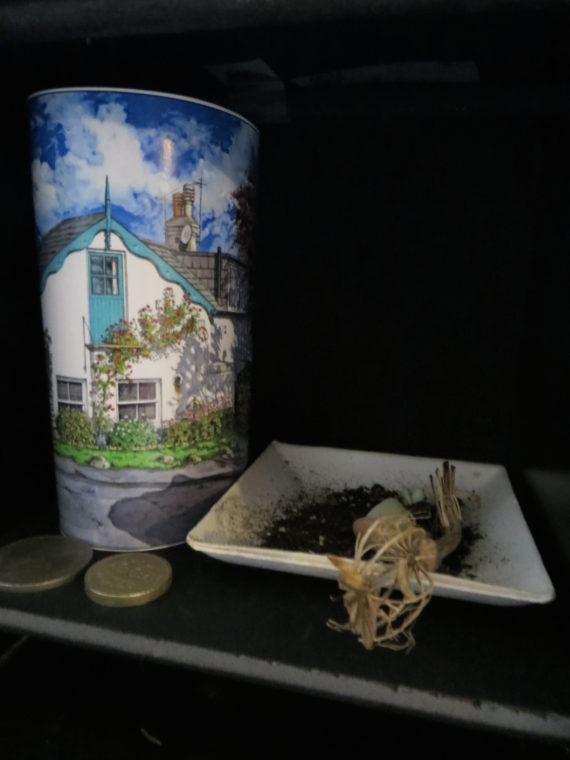 At the end of the day, what is left becomes less important than why something is left; the collective aim to change something is what matters most. 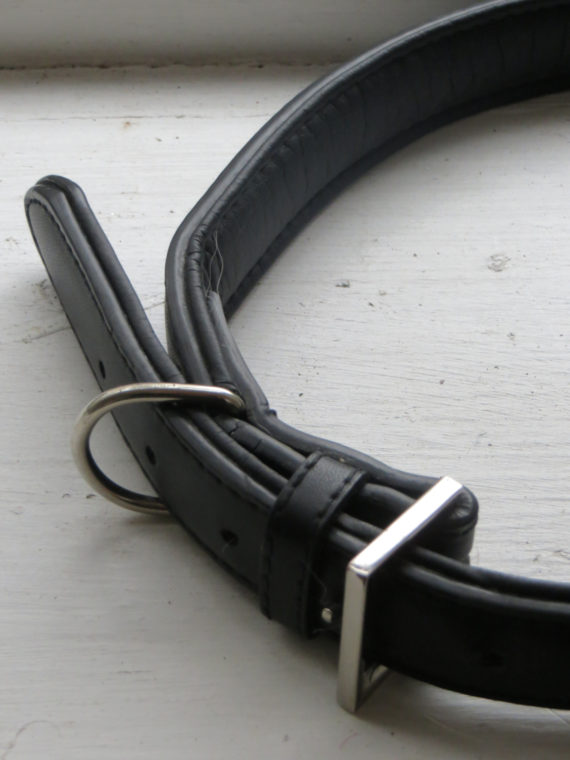 ‘New Narratives’ was a real joy to be a part of; hARTslane’s premise behind the subject ‘Dear London’ resonates with me and the ever increasing lack of affordable social housing is a subject I care passionately about. There was a sense of compassion and humanity amid the artists, designers and architects involved in the show, all of them acutely aware of current social problems and all doing their best, not simply for themselves, but for the local area and its residents. I learned a lot about creative activities going on in my close neighbourhood during the course of the show – secret, hidden hubs of creativity – all doing remarkable work for the benefit of communities at large.