I had a dream about my Dad last night.

So forgive the nostalgia…

Two remarkable things there: firstly, the advantage of finding currently that I can sleep for more than 2 or 3 hours at a time is that I have started dreaming again, secondly, I can’t remember the last time I dreamt about my Dad. I dream about my Mum all the time. She is present in my waking hours too as I go about my day. But not Dad.

Anyway… he was “helping” me hang my work in a gallery. I don’t have any idea what he would think about this life I lead and this work I do. He died in 2005, before my life totally changed. Sometimes I wonder if it the passing of both my parents, and both my parents-in-law that was a catalyst for the change.

My Dad was a practical man. He was a man of sheds, string and large nails, not screws. His skin was walnut brown all year round until his very late years, when due to lack of outdoor activity, it paled. He was as strong as an ox. He had the muscles of a working man, not a gym man. (My youngest son has his grin I think.) As a child our back garden was used for vegetables. I had a small area with a home made swing right outside the kitchen window, on a small patch of grass. The front garden had snowdrops, primroses, violets, a pear tree and thousands of wasps that never stung me…why was that? Anything decorative was planted in straight stripes either side of the path… but he couldn’t really see the point.

When he visited us here, he used to shake his head in disbelief that I had TREES planted in POTS. And they weren’t even fruit trees. What is the point of having a horse chestnut tree, or an ash, or a rowan, or a beech in a POT? (Note to family: when I’ve gone you can set them free and plant them somewhere nice). He was called the “Phantom Pruner” because if you didn’t watch him closely, he would chop everything down to ground level, mercilessly. If you hid the secateurs, he would use the age old stone-sharpened knife in his pocket.

My childhood memories of him are that he worked hard, from early in the morning, and I didn’t see him much. So when I do remember him it is for daft things. I used to ask him to draw for me… he had a small repertoire, consisting of chickens, ducks, pigs and houses. Careful examination of the feet was needed to distinguish between chickens and ducks. He also used to sing a couple of songs to me. Out of tune, and in broken English. I can remember both drawing and singing rendered me helpless with laughter, as he would protest with mock indignation and swear never to sing or draw again.

So why was he helping me in my gallery then? I think he was reminding me that pictures can be hung with nails and it is ok. They don’t always have to be level. They can be wonky, and someone that loves it will love it just the same. No one ever went into a gallery and made the comment “Those pictures were hung so level, and screwed so securely to the wall they made me cry!”

I think it might have been a way of reminding me which bits are important. 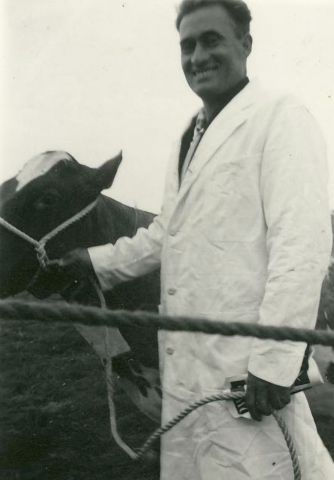