I wrote this a couple of days ago, and have been wondering and pondering whether to post it.

It seems a bit prophetic, rather than my usual “reaction+thoughts” type posts. In the end, it is exactly for that reason I am posting, then if and when it happens, I can be really smug and say, told you so. Or, perhaps, it might prevent it happening in such an uncontrolled way, and allow me to change the pattern….. yeah right…..

It has happened before.

A sort of moment of clarity that shifts everything that’s gone before.

I spent years doing elaborate embroidery. There isn’t anything I haven’t done I don’t think… blackwork, whitework, goldwork, drawn thread, trapunto, stump work, canvas, cross stitch (even made a bit of a living doing cross stitch designs for magazines in the early 90s, and even wrote a book, now available on Amazon, costs 1p, postage £2.80). I couldn’t be doing with quilting, poo-pooed the whole thing – far too much maths going on! But then, suddenly, discovered I could piece the fabric without the involvement of geometry, and went mad. The large piece of canvas embroidery/collage I was in the middle of was unceremoniously abandoned. (And since, was the target for the disembroidery, I unceremoniously cut up the 2ft x 3ft piece into 3in squares!) I made quilts. Loads of them, all sorts of ways. Right up until starting my MA in 2010. Then I stopped. The quilt I was making was also, unceremoniously abandoned. I sit on it in my studio, some of the safety pins still in it. I like it, but can’t really be bothered to finish it. I might one day.

I’ve gone back to all those embroidery skills and I’m full on thinking about these bras, I can see how they will be, and this project will be really satisfying. All the stuff I’ve done up to now seems to be coming out in this project… it’s a bit of a monster really. I’m loving it.

In the back of my head is the thought that a new direction might be looming. I hope to god it isn’t going to happen in the middle of these bras. This one I need to finish properly! But I’ve never predicted the sea-change before, it has always just blown me out of the water.

I suspect it might be musical next time. I suspect I will get to the point where I can’t help myself. I will abandon whatever I am in the middle of and veer off down the chasm of songwriting. It is because it has grabbed me round the throat really…

On Monday this week, at Songwriters’ Circle it was collaboration week (always my favourite). Simon and I sat in a room, me with my notebooks full of songs-in-waiting… just words. Simon had his guitar. I flicked through, and none of the lyrics I had been looking at seemed to fit with him, but I had one lot, that I had just written, the ink was barely dry. I mumbled them to him. I didn’t really know how they felt this time. Usually I do, I have a tempo, an emotion, a feeling, a sound in mind. Not this one. 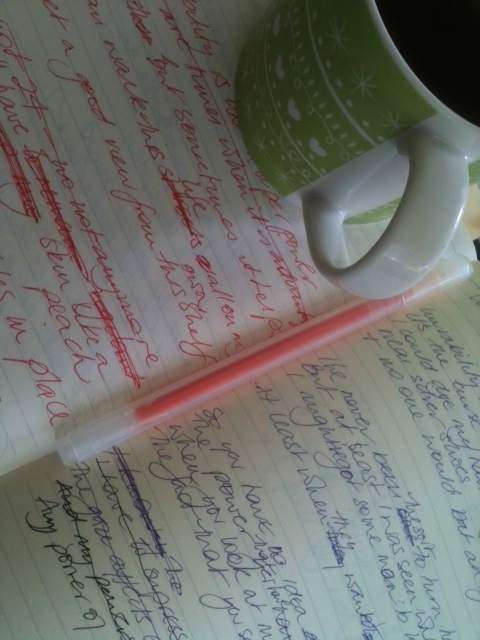 When I read them, Simon said he thought they might be a bit jazzy, and that he’d been mucking around with a few strummy chords. They weren’t his usual thing, but they were there. He played them. They fitted. It seemed to me we had an instant song, that this piece came together in about 30 seconds flat. In the space of half an hour I had written two more verses, and we had recorded the basic sketch.

I tell you, that is such a buzz – there is nothing like it.