Yesterday was a difficult day.

I had cleared and cleaned the studio and my desk. The space in front of me was emptied of all that wasn’t directly related to current thoughts… Basically two bits of material. 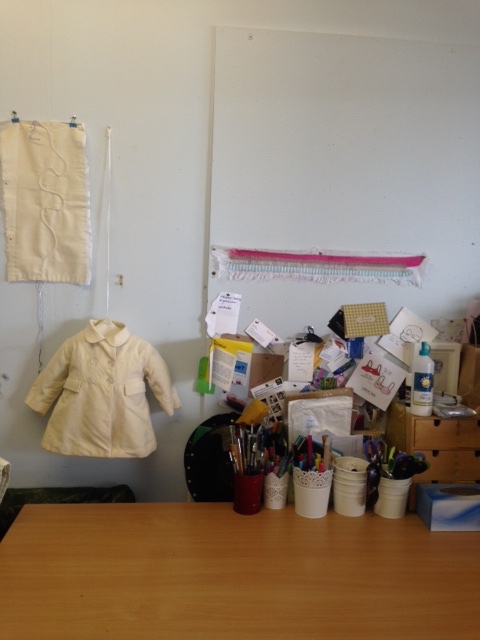 I paced about, ate too many biscuits, paced about some more. I stuck some fabric to a box to store my mic in, and made some earrings out of scrabble tiles – don’t ask. Then I paced a bit more. Then I decided I needed a shot of proper caffeine and put the coffee on. Then I wandered about the charity shops of Dudley and bought a pair of baby’s dungarees. Khaki. Khaki ffs! I took them back to the studio, took a photo of them, sent it to Bo and asked for help! What on earth am I doing with them? It was a knee jerk panic reaction to having nothing in my head. Comfort blanket purchasing at its very worst!

I paste below some of Bo’s comments, and my responses… If I didn’t have him around I dread to think how I’d be going on! 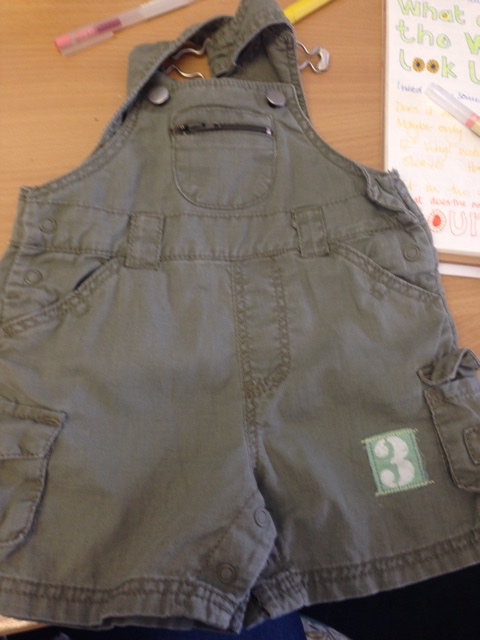 Bo…. I Just bought this at charity shop and got back and put it on my desk and then asked myself what the f*** for? Because I can’t figure out what I’m doing I’m following old patterns and buying second hand children’s clothes. Stupid nonsense…. I don’t know what I thought I was going to do with them!

And then Bo said:

You need to read what you wrote in your blog…..

The obvious enough way forward I think for you now reading what you wrote, is to return to the stitch. I suggest producing a giant one…..

When I met you, you were sewing text into fabric…. You use text to create your songs…. How can you now combine this with the stitch…

Let the stitch do the work…. Use it as a starting point, I don’t believe you ever have, in an unconscious way and see where it leads…. Like Kandinsky painting music……

Just a thought or two…..

(our communications often follow this pattern, me manic and all over the place, his responses considered and calm…)

Of course I need to read my own blog! Sometimes though it is like a different person has written it, in a different state of mind. The woman that writes my blog is often a different woman to the one in the studio… She’s much more on the ball than me…. Anyway…. I read the blog, read my sketchbook…. Read Bo’s email again and responded:

I think I could move away from that now… Just stitch… Maybe stitch what I hear…. Maybe still into clothes… Starting point…. Link to what is there but a step further… Then see what it looks like.

That it doesn’t need to be a hand or words…. Or anything else “readable” The stitches are the hands and the words. I’ve very pompously said for quite some time now that the stitching is my voice, I can’t speak paint, but I can speak stitch…. So it’s time to put my needle where my mouth is and stop trying to translate it into other languages and just go for it….

You know I like that the work is accessible, and I think those things have been what I’ve been clinging to, but I think I can let that go a bit more… Make the audience work a little bit harder….

Having made this decision, I am actually quite excited about starting again… I want to go to the studio right now at 5:55am…  And start stitching…. I need new needles….

Strip down a car and line up the parts on the ground….. Now drive it to work…. Take your family on holiday, and build memories… Get the dogs all muddy and put them in it… Take Someone to the doctor…. Go Christmas shopping…. Load all that hope up and go…. You can’t. The car is more than the sum of its parts…. People are more than the sum of their parts…. The bit that is MORE THAN is the bit I’m interested in….

Put someone together… Build them up and fill them with experience and memory as a parent or a friend… Or have an affect on someone, knowingly or otherwise, and the extra bit happens… The world knocks bits off and pours bits in…

Yesterday was hard, and I did nothing  really…

Today I want to make…. Light bulb moment… I want to have something made/started when I next see you.

A giant one though? A giant stitch or a giant piece of work? Why? What does bigger do? I have seen students do “a giant one” for their degree shows and it rarely adds anything to what has already been done… It’s the same. But bigger…. (In my opinion)

So today I start again… I’m (maybe) going to strip the dungarees down for parts. Then I stitch…. And wait for the why to come along later….