I read in order to extend my ability to express what I’m doing… trying to do. I’m not looking at other people’s words in order to crowbar their thinking into my work so that I look clever. Because I’m not clever.

I draw in order to explore and express and order the ideas I have no words for. That’s kind of the point. But sometimes I need to find words in order to explain myself to myself. Other people’s words help, whether that’s a conversation, or through reading.

I don’t read much compared to many of my artist peers. When I do it does tend to be an after-the-fact thing, or three different people have recommended the same book/author to me in the space of a month “There might be something in it then?” I think if I was led by the reading, rather than my own thoughts and experiences it would seem like I was cheating. I’d rather read afterwards and say “oh so that’s what it might be?” Than follow another’s path. We all have our own. Of course it isn’t really like that because what happens is, having read something, it then affects the forward thinking. A light has been shone on something. There’s a clarity that allows me to move up and around the spiral a little. I am influenced at certain points.

One such book is Tim Ingold’s ‘Lines’ at the moment. It is helping me to explore and identify where my lines are drawn, manipulated, formed, cast, sung, handwritten… I can see previous diagrammatic forms and can see how and why they mutated into what I’m doing now. Those early forms were contained, pinned down. They had a clear body, a boundary, edges. They were contained, bound, surrounded. The shapes were held captive by the edge of the page and the size of the handbag sized cell. One could read into this that at the same time, life was also similarly curtailed. (It might also be now, but for different reasons.) Gradually as life expanded again, I let out my lines, let the paint and lines travel to and over the edge. There is an implication that they could continue… that this is just a slice of something spreading, forever on the move?

Currently the drawn lines travel towards the edge of the paper still, and now up, into the wire drawings into a third dimension. They pull away from the paper and the wall, but are still tied in some way by the cast shadow lines.

I know that my next move out and away is with sound. The reading has helped me think about the lines, but I need a different conversation about the sound. I think I have a grasp on the surfaces and the edges… but now I need something extra to help me think it through, it’s a bit amorphous at the moment and I think what I’m looking for is that set of rules that I can work within, and then break out of. 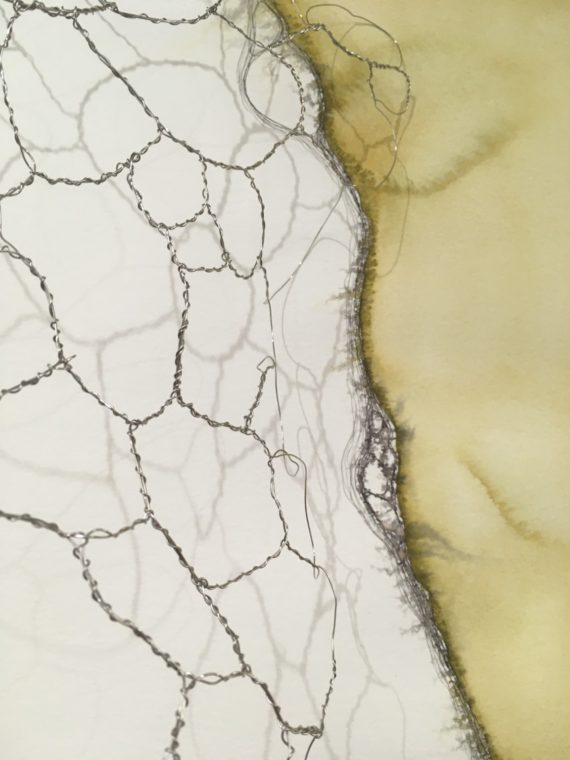