I’m sat at the table with (most of) the contents of the studio still piled behind me in boxes, but with a slow seepage… now and then I shout “Where are my heavy pinking shears?” and I go diving in.

I also was desperate to use my favourite mug, last seen in the box at the bottom of the heap…

“Can you just hold this box while I lean across to fish out the guillotine please?

This has happened so frequently I now am beginning to doubt why the boxes are still there, I could just unpack and be done with it. But that seems defeatist… I WILL FIND ANOTHER STUDIO!!!

The rest of the house is a bit of a tip too. The blossom has fallen and browned, and has been walked through the entire house from washing line to ironing pile to wardrobe. To be honest there seems no point in vacuuming until it has been swept up from the garden. I can’t sweep the garden because I’ve just put the washing out.

So, while this domestic state of affairs slides into chaos, I decide the things that REALLY NEED to be done are bits of decorative painting. I have a small collection (3) of mosaic birds on the wall, that definitely needed a tree to roost in. So to my husband’s horror, I just did it. I had been thinking about it for a while, but I don’t think I had actually mentioned it, so when I entered the room brush in hand, and plonked a tea towel over the cd player (playing Sufjan Stevens’ Carrie and Lowell) he did look a little concerned. But my fingers itched and twitched with the need to do it. I told him it wasn’t going to look like a nursery school mural (which in a previous existence I have done). He returned to his quivering newspaper and pretended to finish the sudoku.

It looks ok… I might wash over a bit of it… scrub it back a bit maybe… but I’ll live with it a while.

The itch not quite scratched, I look around for the next thing. Being a couple of a certain age (we got married in 1982) we have a few items of nicely oranged pine furniture. Functional, but not of much design merit really. So I painted it green. It now sits on top of the dining/studio table waiting for me to decide whether it should be a tasteful sort of nod at old Bill Morris, or whether I should go the full paisley with stripy legs… or fish and feathers…. 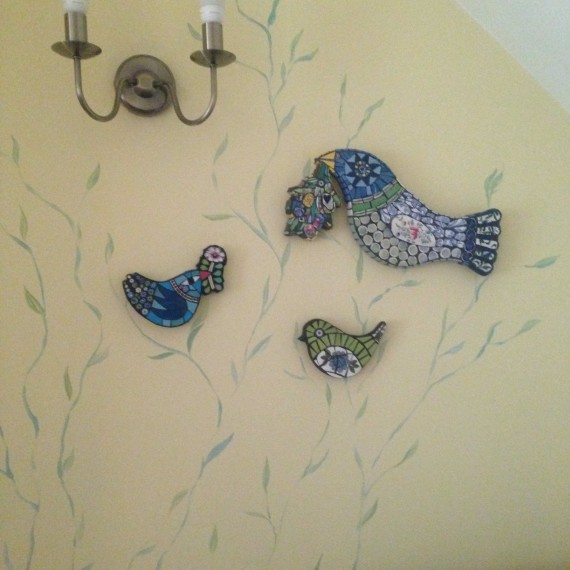 What I really need is a studio. I need a proper routine of deep thought. In the meantime I shall have a pretty new table, but it’s just fiddling while Rome burns.