It was an absolute pleasure to meet with Klas and Lovisa this morning. Lovisa actually invited me to meet with them after I briefly mentioned an idea that I had when we bumped in to each other outside of the library a week or so ago.

We discussed two projects as well as my thoughts on how best to develop and strengthen an artists’ network in the borough. The idea (which I had already spoken about with Lovisa) is perfectly timed as it requires only modest economic investment and the Swedish financial year runs the same as the calendar year – which means that there is not much left but what is left has to be spent!

The idea, which is two-fold, is inspired not least by the Meter Square Gallery in south London. Ken Taylor and Julia Manheim created a meter square street-facing window on the ground floor of their home/studio/architectural practice and programme temporary exhibitions and events there. I showed with them during London Open House in 2009 and it is actually that piece that I proposed to Lovisa and Klas this morning. There is a large and unused window on the left-hand side of the library and cinema complex and I thought that it would make a great exhibition space, so my idea was that Go-Go should be installed there and launch it as a kind of ‘project window’.

Go-Go is perfect for the space and time of year, or perhaps the space and time of year are perfect for Go-Go. I am certain that the “light splatter” will play across the vast white wall of the cinema building opposite, and as the hours of daylight become shorter and shorter an art work that lights up the dark seems very fitting indeed. It is very unfortunate that the condition of the buildings around the defunct fountain has been allowed to deteriorate while the council engage in prolonged discussions about renovation, demolition, and everything between these extremes. One of my ambitions is, of course, to draw attention to the stylish (if not exactly radical or daring) architecture of these 1960s buildings. I would hate to see these fantastic and functional buildings torn down for no reason. So one aspect of my project that goes beyond showing my own work is an attempt to re-activate the space and to engage people with it and the possibilities that it offers. 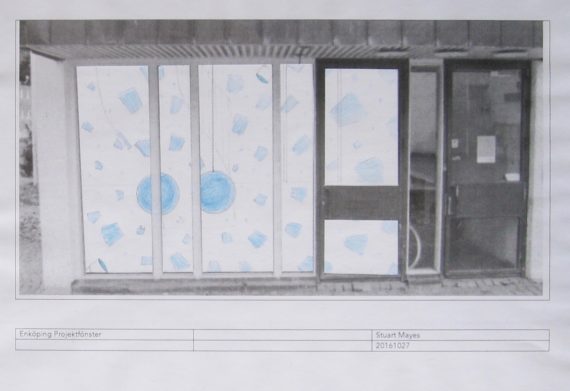 The project window will give artists the possibility to show work on a modest scale, and hopefully it will appeal to those looking for experimental or ‘alternative’ ways of thinking about an exhibition. The window’s accessibility is great – anything showing there is visible all day every day, this significantly increases the public’s opportunity to see art and avoids any issue of having to cross thresholds or open gallery doors to see art. We even discussed inviting artists to show there and using the window as another way of putting Enköping on the artistic map.

It is all very exciting, and I am delighted that Lovisa and Klas are so keen on the idea. I suddenly have quite a lot of work to do as we have agreed that Go-Go and the project window will be launched in conjunction with other first advent celebrations on Sunday 27th November.

The meeting re-confirmed for me that the social aspect of my practice is essential to me, and that although I might like the idea of having a commercial gallery I really want my work to engage with a wide audience and for it to be a part of the discussion of how we experience our everyday world … in other words I am simply continuing with what I started just about 30 years ago – Art and Social Context.