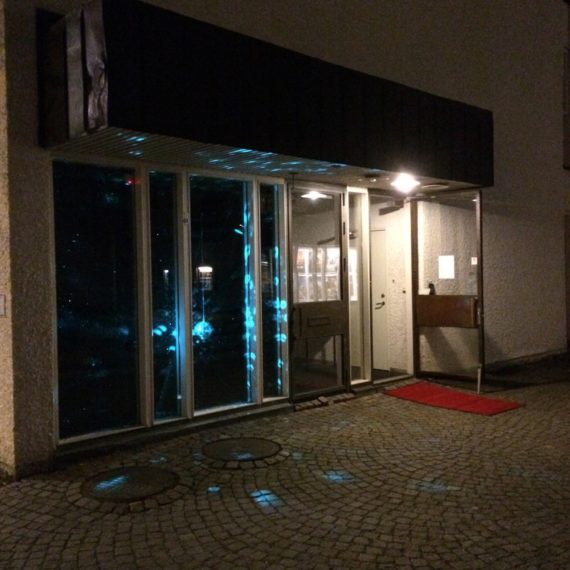 Go-Go (for Enköping) is up and running! It has been a really good experience from my initial and very casual chat with Lovisa through to cycling by it this morning on my way to and from the gym.

The ‘opening’ on Sunday evening was fun and I spoke about the piece for probably five minutes or so in Swedish and without a script – whether what I said was understood or not is another question. When I think about how sweaty I used to get before speaking at those first Swedish evening classes in London I amazed at what I do now without a second thought.

During the week of preparations and installation it struck me just how appropriate Go-Go is for its specific location in Enköping. The piece was conceived and presented as site-specific for the m2 Gallery (London) in 2009. At that time I was one month into my three month residency at Wip:sthlm and returned to install that piece and several other works at the gallery and private house for Open House London. I had no idea that two years later I would be moving to Sweden, and no idea that seven years later I would be living in Enköping. And yet the work seems perfectly at home here not least in direct references to the history and architecture of the site. It is almost as though the work was made as a premonition of what would come to be …

I paused here to have lunch. The county radio station’s news roundup had a feature about the new cultural policy that is going to be introduced in Enköping next year (providing that there are no last minute hitches). I thought that I would have a look online to see if I had understood the report correctly, my search turned up an article in the local newspaper …. 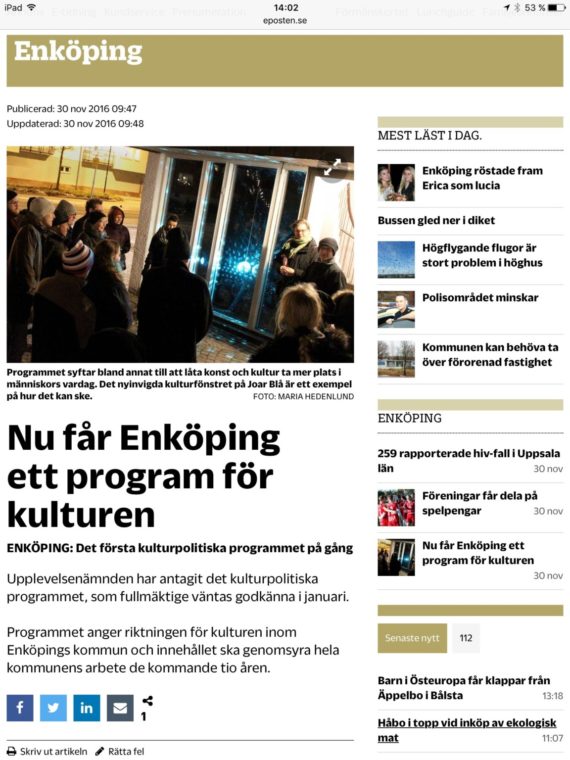 Go-Go and ‘Joar’s art window’ are sited as examples of how the council are already making culture more accessible ahead of the ten year programme. So it looks as though my art and my initiative – made real in collaboration with the Arts Development Team – are perfectly well placed socio-politically too!

It seems a little too perfect, the timing of all of this is uncanny. From my own perspective I can see the sequence of events and coincidences that led to this, but it is still a little spooky that it has all happened. I think that I will make a flow-chart (best as I can) as I want to remember this! I want to remember that the ways things happen is a curious blend of effort, chance, fun, daring, professionalism, chat, focus but perhaps mostly the result of being open – open to new ideas, open to new people, open re-imagining oneself and one’s work, open to suggesting things that do not seem to make sense at the time, open to letting things unfold and grow.

The soil in this part of the county is known to be particularly fertile (due to vast areas previously being sea and river beds, and therefore very mineral rich). It is certainly proving to be very fertile land for me too.