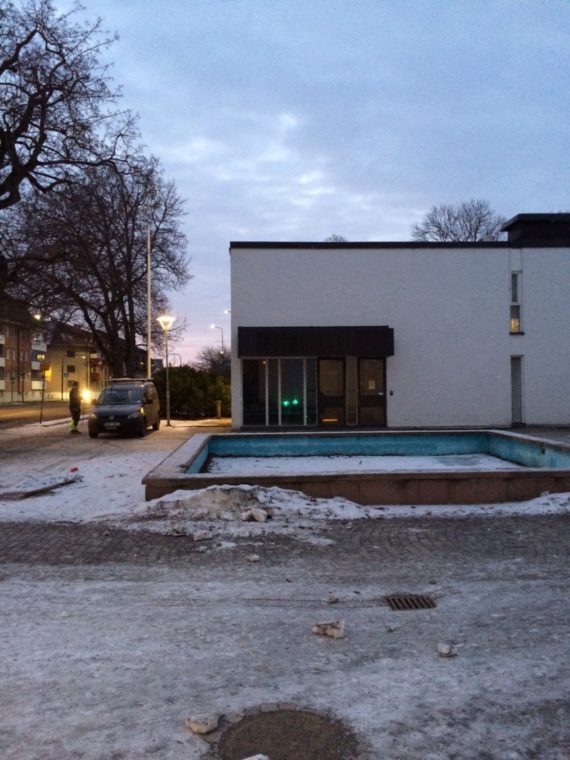 This morning [Friday] was my last early morning cycling past Go-Go. The piece continues to be on show until Sunday the 19th however I am away next week so I will not be riding past three times a week on my way to the gym for their 6.00am class and home again afterwards at just gone 7.00. Going past it so regularly has given me both pleasure and anxiety (if that is not too strong of a term). Seeing those twinkling orbs and their blue light splatter cast about the square makes me smile and hope that other people have enjoyed the installation during it’s three month residency in Konstfönster Joar. Seeing it only half lit, or with a motionless mirror-ball feels me with concern and questions – how long has it been like that, has anyone else noticed, do I have time to fix it today, how many lamps will it get through before the end of the run?

The piece has worked really well not only in activated ‘Enköping’s new art venue’ but in enabling me to speak about my ambitions for future projects – both individual and collaborative. It has generated a considerable amount of press interest in me. It came as a surprise when the director of the town gallery told me that he had put ‘my’ article up on their notice board beside the interview with the artist whose show opened last Saturday. I did not know that anything had been written or published. The article is based on my presentation and the discussion that followed about my ideas for an artists’ house. I am very grateful to the journalist Gunilla Edström for such positive and enthusiastic writing, and not least for quoting an established and respected artist’s support for the idea. This will be good to have when I start putting together a serious proposal. 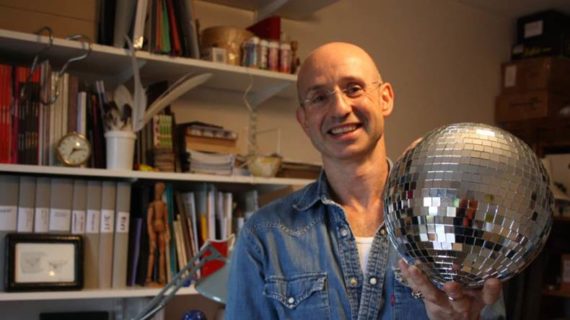 I am looking forward to seeing someone else’s work there and I am delighted that it will Ken and Julia (whose m2 Gallery inspired me and was Go-Go’s original showcase). As soon as I am back I will be assisting them with their install – and I do mean literally as soon as I get back, my return flight arrives at 8.50pm on Monday evening, Ken’s flight from London arrives half an hour earlier so we will meet each other at the airport and make our way to Enköping together – ready to start work bright and early on Tuesday morning.

There has been lots of discussion, sketches, revised sketches, further discussion, and even more drawings in an attempt to make sure that the install goes well in the limited time (and space) that we have and that their work looks fantastic. Ken, being an architect, is able to produce wonderfully detailed, and beautifully hand-drawn, sketches that have been a great help when I speak with Klas in my ever improving artist’s / curator’s Swedish.

Once again Klas has been great in taking on all of the ideas and challenges that Ken and Julia’s show presents – I think that it helps that he is a practising artist too. While I am away he and the brilliant carpenter at the museum will paint and cut apertures in the boards that will give the show’s films and photographs the distinctive m2 look. It is good that the window is going to look so completely different.

The other thing that has been occupying me recently is my now annual task of proofreading for the Supermarket art fair. The catalogue entries for each exhibitor are becoming easier which could be the result of one or two things: the exhibitors are becoming more international and used to expressing themselves in English, or my English is become more European – a friend who recently proofread something that I had written commented that sometimes my sentences sound a bit ‘second language’! The longer articles though provoke both interest and frustration. The interest is genuine as I get to read texts by artists and curators engaged with fascinating ideas and projects. But so too is the frustration as I have to try to justify and explain why there are some rules that simply have to be followed – this is not unique to English, all languages have a grammar and syntax that just is as it is and needs to be accepted. I openly admit that I am not a professional proof-reader, nor have I studied language however as a mature native speaker and former (theory) lecturer I think that I probably have a better grasp of basic English than an aspiring foreign artist/curator. My role as proof-reader is ensure that the text is in the best possible English and is as comprehensive as possible. It is no secret that I am in favour of complex ideas expressed simply, however I am careful not to turn the texts into something that I would have written – as far as possible I maintain the author’s style. Should I really have to justify inserting determiners (‘a’ or ‘the’) before virtually every noun in six pages of dense writing? Or that it sounds wrong to play ‘pick n mix’ with phrases such as ‘touching a nerve’ and ‘striking a chord’? Proofreading documents in shared Google Drive folders does not make matters better – particularly in Sweden where everyone is welcome to share their views. Late last night after several hours of writing lengthy explanations for too many simple amendments and alterations that had been ‘rejected’ by the author I came up with a three letter acronym that I will be using next year – NFD: Not For Discussion.

(I am only too aware that my own writing often contains typos, mistakes, and sometimes in my enthusiasm to get a sentence out I omit vital words – that is the point of having a proof-reader. Anyone who wants to do this for these posts will be welcomed with open arms!)