Wednesday evening was a rather late one too – Ken told Julia how things were progressing with the installation, and then we chatted more generally about what still needed to be done and how they wanted to work the next day.

It felt a bit odd to be a home on Thursday morning knowing that everyone else was working away at the window. It was also the first time that I had been alone and quiet in ten days. I spent a couple of hours completing the on-line application to renew by British passport. Doing this in the light of seeing that almost every article in Ken’s copy of the Guardian (from Monday) referenced Britain leaving the EU was an odd experience. Depending on how things turn out I might have two passports in the future, I imagine that it might be easier to use a British one when traveling to and from the UK, and a Swedish one when traveling in Europe.

Everything was close to finished when I arrived at the library in mid-afternoon. There were of course some last minute things to fix and it was good to have time to talk about Ken and Julia’s public presentation in library after the opening at the window. That evening there were also four awards being presented to upcoming talents from Enköping in the fields of music, dance, and photography – these were scheduled between the opening and the artists’ talk. The awards were re-instated last year after several years’ absence and those receiving them would be the first of the new awardees. I know the woman who received the award for photography from my gym – I had always thought that she was a gymnast but I was wrong she is studying photography in Stockholm. It was great that she was selected and lovely to see how proud her family and boyfriend were – they are an amazingly creative and athletic family all of whom train at the gym, and her mother is a designer specialising in recycling denims. A family that trains together (obviously not all the time but quite often) would seem very peculiar to me in Britain, but here it seems quite alright. I am getting ahead of myself – back to the opening.

Everyday Fragments.  At five o’clock there was a good size group of people standing outside of the project window, including a reporter and photographer from the town newspaper. The reporter was interested in their artwork but also how they came to be in Enköping, both Ken and Julia are good talkers and their enthusiasm for Sweden as well as unusual art projects kept her pencil actively darting about her traditional reporters notebook.

It being Sweden (short) speeches were made; one by Klas welcoming and thanking everyone (I mean both the audience and everyone involved in the production), one by me give a little background to the show, and one by Ken and Julia about their work. I really like these types of speeches and see as vital in terms of accessibility. Not only is it just polite to welcome and thank people for coming to an exhibition it acknowledges their participation, it also lets them know a little of process involved in putting a show and how many people have been involved. Furthermore it puts the visual material in context and (hopefully) offers some ways to approach it. Last but by no means least it identifies the artist(s). All of this makes it far easier for someone to feel more able to engage with the work and even to speak with the artist(s). This is something that no matter where I show in the future I will include in any opening.

Following the speeches people chatted away and looked more closely at the artworks. I saw that the chair of the Konsthall (the town’s publicly supported but voluntarily staffed gallery) was speaking with Ken, while Julia was talking with members of the arts department who are not directly involved with Konstfönstert Joar. Other people joined in their discussions and as it was getting close to time for the award ceremony a group of us were discussing the recent appointment of former V&A curator Kieran Long as director of Arkdes – Stockholm’s architecture and design museum.

Both Ken and Julia are consummate professionals and very experienced educators – their presentation was perfectly pitched and gave an incredibly rich picture of their individual and collaborative practices through the context of the m2 gallery that they run in south London.

There was plenty of interest in their practices and their ways of making them sustainable. Even after we rounded off the evening’s question and answer time people were continuing to ask things and wanting to speak with them. I was pleased to be able to introduce them, and Klas, to Ann who runs a private gallery in a beautiful building between here and Västerås. It was good to see Ann again now that she is preparing for re-opening the gallery after it being closed over the winter.

I had an excursion planned for Friday. Both Ken and Julia are fans of Ralph Erskine. Ken has a particular interest in him and his buildings, and as a young architect he worked on Erskine’s famous Ark building in Hammersmith, London. When they were here for Open House Stockholm in October we had discussed the possibility of an outing to Erskine’s former home and studio (a private residence that is not the easiest to locate after its relatively recent sale), however there was not time that weekend. So when Friday was forecast to be a fine winter’s day it seemed an ideal opportunity to take a look at it as well as one of his housing schemes on the outskirts of Stockholm. 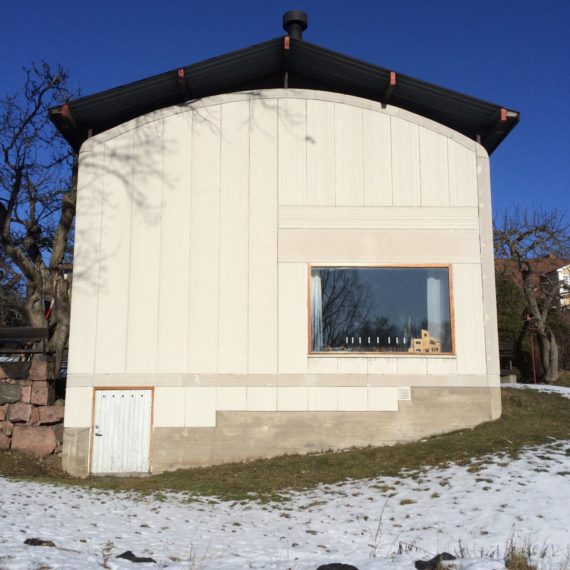 We had also been invited to a visit the Konsthall here in Enköping which is not usually open on a Friday but Ken and Julia had struck up a lively conversation with Bo Sundqvist – chair of the art association who run the gallery – at the opening at Konstfönstret Joar, and as they were leaving before the weekend a ‘private view’ had been arranged. We were running a little late after stopping to take some daylight photos of Everyday Fragments. Thankfully Bo waited for us and gave us not only an interesting walk through Gudrun Westerlund’s exhibition but also a little of the building’s and the art association’s history.

The weather was perfect for strolling around Ekerö. Having found a great little café for lunch and the traditional Swedish lent bun – ‘semla’ we had a very enjoyable wander including a look in the library and the even the local branch of the state off-license (not strictly part of the Erskine experience but we were passing it was a good opportunity for Ken and Julia to see something truly Swedish)! En-route to Stockholm we made a minor detour to Vällingby – another example of a particular type of Swedish town planning that made it a living model of international interest in the 1940s/50s, attracting architects from other European countries as well as the United States.

A lovely dinner in a small independent restaurant not too far from their hotel brought a great day to a very nice close. We said our goodbyes and I headed back home.

On Sunday I was back in Stockholm! While Ken and Julia were at Marina Abramovic’s show at Moderna, Karin, Antonie, and I met to discuss our upcoming research-performance/performance-research for the Supermarket Art Fair. This included constructing and re-constructing one of the temporary greenhouses that will feature in our ‘Hothousing‘ event. Now that Everyday Fragments is installed my attention turns to my contribution to The Artistic Researcher’s first public presentation – there is work to be done!