Knowing that I usually take far too much time writing a new post is preventing me from writing any posts at all! This is an attempt to write a quick post before too much time passes and the thoughts and events that seem so urgent become superseded or simple lose their shine.

I had a very nice evening in Uppsala on Wednesday when I was presented with my award. Daniel Werkmaster, director of Uppsala Art Museum, gave a brief presentation of why I was selected, I received the actual award and a bouquet from Maria Fregidou-Malama (who sits on the culture committee), and then I was invited to give an acceptance speech! I am proud to say that I managed to do it un-prepared and in Swedish. There were awards presented in dance, music, and literature, as well as honorary awards for history and theatre design, and a two-year ‘development’ award for a musician. It was lovely to one of a truly diverse and interesting group, and to feel part of the cultural community in my adopted county and land. 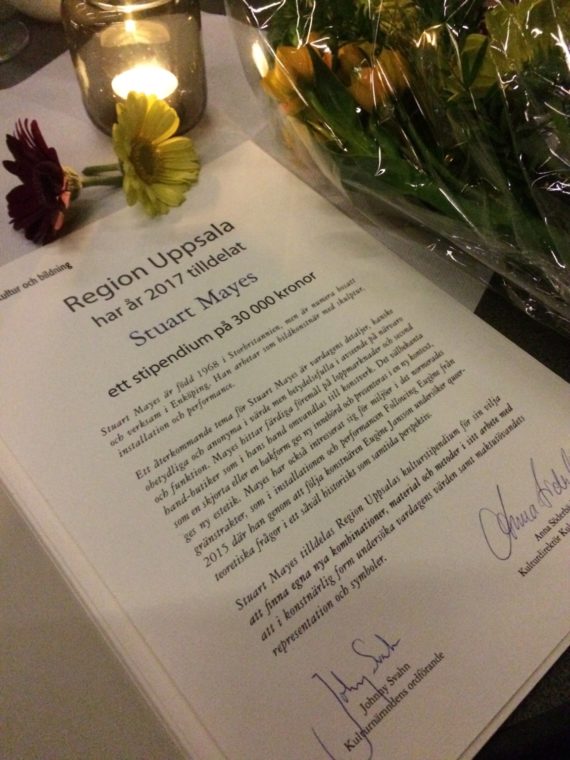 I was also in Uppsala the evening before (Tuesday), with two other members of the steering committee at Enköping’s konsthall, for the regional arts’ associations annual general meeting. The meeting, as well as the discussions in the car on the way there and back, made me realise that I have quite different approaches and ambitions for the kind of exhibitions and events that I am keen to work with. It will be a good test of my abilities (and language skills) to find good ways to suggest extending and expanding the scope of the konsthall’s programme. I find it hard to judge if the difference of my opinions are based simply on being who I am, or on my not understanding the role and function of a konsthall. No doubt it is a combination of the two (and probably a great many other factors too). I look forward to seeing how my ideas go down!

Friday Klas and I spent a very enjoyable day cleaning and chatting in our new studio. Klas had already made a start during the week however there was/is still plenty to do to make the former garage/ car repair workshop into the kind of place that we (both separately and together) want as studios. Economically it makes sense to see if anyone is interested in subletting the smaller third room, though both Klas and I spoke much more about the exciting possibilities of it being a showroom and/or project space for visiting artists. Our discussion rounded off with us considering the idea of it being principally a showroom with the possibility of artists hiring it as a ‘clean’ working space between shows/projects. It is fantastic to talk things through with Klas, for every similar and shared idea we have he offers something new or adds something else – I only hope that he feels that I do the same. One thing that we both are keen on is creating an active and lively place – the kind of place that other people want to engage with, a place for ideas, discussions, dreams, and of course art. I have a good feeling about this! 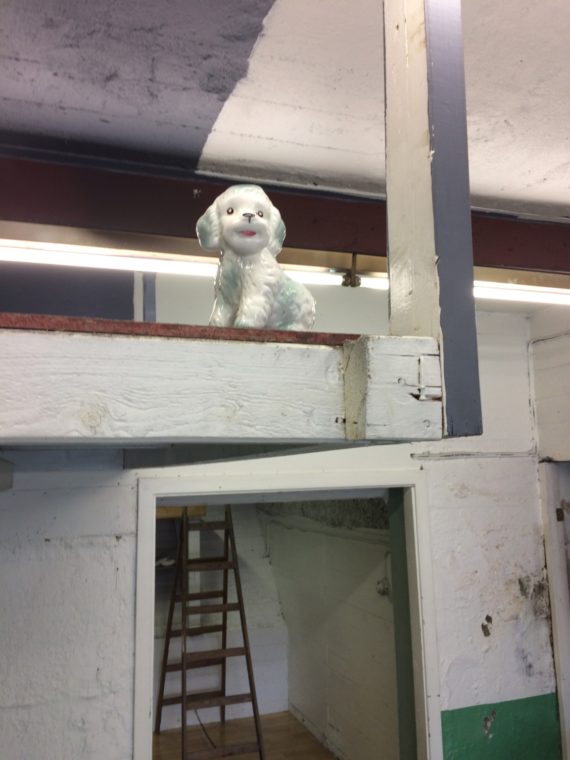 Before going to the studio I had a meeting with Johan in the parks department. From the 18th he will be my boss when I begin as one of the team of extra seasonal staff taking care of the various parks and gardens in and around the town. On Friday though we met to discuss the well-established annual ‘Gardens’ Day‘ that Johan co-ordinates. He is interested in introducing visual art to the day – ideally he would like to see some land-art and site-specific installations as these are particular passions of his. Thankfully he is thinking more about 2018 than 2017. Though he would like artists to get involved this year too. Without a budget it will be tricky (nigh on impossible!) to pull off something spectacular this September. I can imagine that a good many local artists would be interested in the possibility of an ‘art-fair’ as it offers opportunities for both promotion and actual sales. So I proposed that temporary fencing be offered for artists to hang their work on – in an outdoor type of salon-show/fair. I was thinking of Urban Art in Brixton, and even the paintings hung on Hyde Park’s railings along Bayswater Road. It would be great to find some artists who might be more inspired by Joshua Compston’s ‘Fete Worse than Death‘, I am not holding my breath but I am prepared to be surprised!