Sunday afternoon and while making some museli for the coming weeks’ breakfasts I find myself recalling bits of the conversation that I had with Pavel yesterday evening. He has been looking at the Following Eugène blog. With the museli baking I log in to my own blog and am soon absorbed in reading what I wrote five years ago. Chronological and geographic distance is a gift. I find it interesting to read the entries – it is almost, though not quite, as though they are written by someone else.

I did not make it to the studio last week, nor do I expect to be there this coming week. My paid employment is keeping me busy with preparations for the ’digital summer holiday programme’ – Swedish school break on Tuesday. I have four weeks holiday from late June to late July. I had intended to travel around Sweden and even though travel restrictions have been lifted here I am not so keen to be too far from home while the coronavirus continues to be rife. I imagine now that much of that time will be spent at the studio. The trial ’heraldic flag’ that I am making is almost complete. It has only just dawned on me that despite my visual references for it being the flags and insignia hanging in churches and grand halls, there is a painting by Eugène that features flags hanging in a not too dissimilar way. 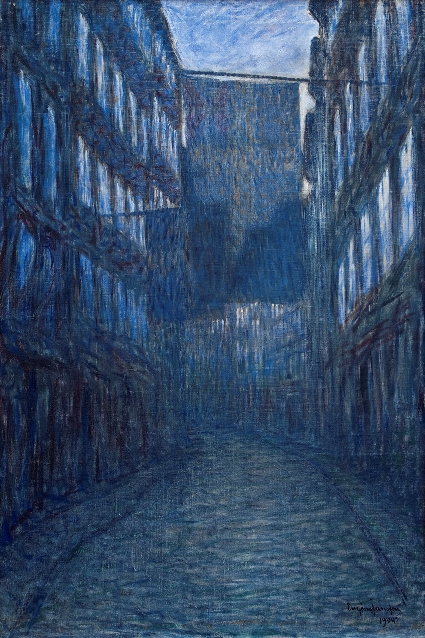 Österlånggatan is acknowledged as Eugéne’s last ’blue painting’ – the last of the series that brought him (with the support of Thiel) to public prominence. It is at this point with economic security and his studio on Glasbruksgatan that Eugène immerses himself in the world of athletes and athleticism. It is three years before he exhibits the first this new body of work – Naked Youth. The naked man in question is Knut Nyman – Eugène’s lover. 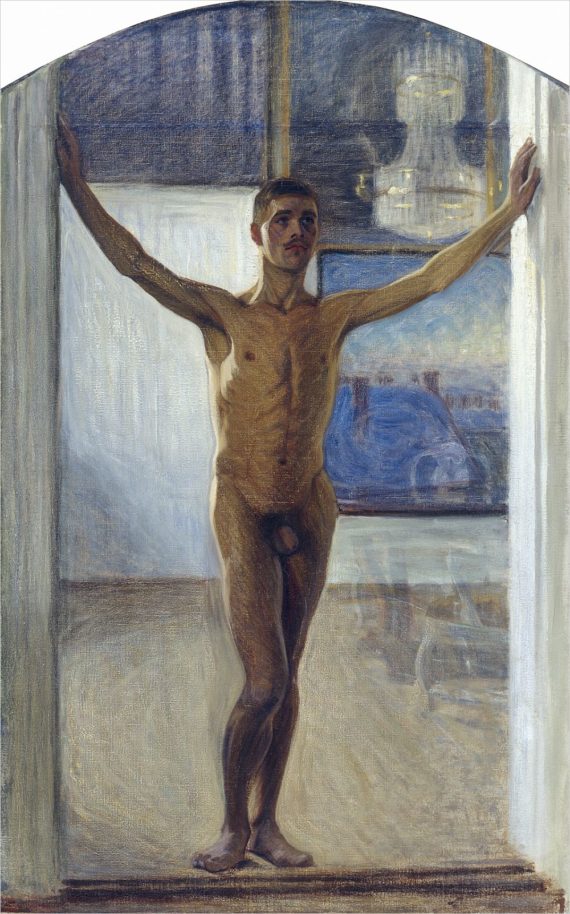 The painting is exhibited in Uppsala (1907). Five years ago I am sure that I did not pay so much attention to where the painting was shown. Today as I develop my own artistic relation with the city it feels vital that I find where the work was exhibited. And I want to know more about what the exhibition was. I assume it was a group show, perhaps something mounted by the opponents groups to which he belonged (the group formed by artists in opposition to the authority and dominance of the Fine Arts Academy).

In discussing ways to mark the opening of the Uppsala Artists’ Club’s new premises one of the committee members suggested that artists not only bear an artwork over the threshold before installing it in a group show but that we walk through the city bearing the piece. It immediately seemed an ideal way for me to re-engage with the performative Mr Dandy Blue and to create an event that brings together various strands of my current practice in a specific historic and geographic context. It would be a very real intersection.