At a few minutes before 3:22pm (central European time) yesterday I put my British passport along with the printed and signed copy of my online application for Swedish citizenship in to the post. 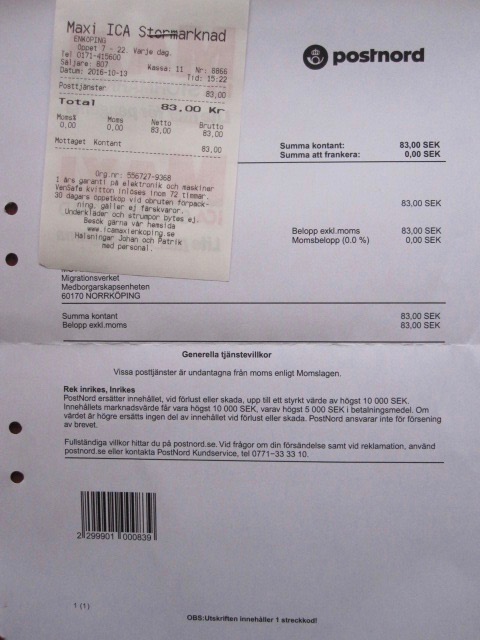 Yesterday marked five years, to the day, since the Swedish Immigration office granted me on-going permission to live and work in Sweden based on my coming from another European Union country. Since the UK’s EU membership referendum result was announced I have been waiting for October 13 in order to make my citizenship application. My British passport will be returned to me (it is simply needed as part of the process) and unless there is a truly unforeseen problem I should be granted Swedish citizenship sometime in the next couple of months.

The immigration services here have not yet said what they are going to do about UK citizens living here once Article 50 is invoked. However the immigration service is well known for sticking to the letter of the law (even if they acknowledge that the law may be clumsy or plain wrong – they argue in such cases that it is the legislation that needs to be amended rather than them who should bend the rules. They are very clear that it would be wrong for them to take the law into their own hands). As I have read that as soon as the UK invokes Article 50 the country will no longer be a full and regular member of the European Union, I therefore assume (though have not been able to have it confirmed) that my permission to live and work here would be ‘questionable’ at best (and could be immediately revoked at worst).

I encourage all UK artists who are already (permanently) living in other European countries and who do not already have dual citizenship to investigate their options sooner rather than later. I believe that Sweden is like many other European countries in that it recognises dual nationality, as does Britain. However I am also aware that Sweden has one of the shorter qualifying period – some countries require that citizens from other lands have been resident for eight years.

While it might be somewhat re-assuring to try and believe UK politicians who propound Britain’s negotiating power and their abilities to secure the best of both worlds (being outside of the EU but retaining all the benefits), from here it seems that many European counties and EU leaders are less than enamoured with the UK and are taking a hard line – out means out. (Donald Tusk’s Brussels speech must make uncomfortable listening for those expecting something close to business as usual.)

No matter the precise details of future movement of people and/or goods between Britain and the European countries I think that it is fair to assume that it will be considerably different from that which we have gotten used to. Unlike large global corporations and established cultural/educational institutions who have personnel and HR offices geared up for assisting with appropriate visas and permissions, and finance departments that are already well versed in dealing with trade with non-EU countries, I can imagine that smaller arts organisations (and individual artists) are going to endure a long period re-adjustment and learning. I am of course concerned about how this will impact on their work and programmes as they (and we artists) are not in positions to recruit additional staff, so all of the hours spent coming to terms new ways of working will have to be drawn from existing schedules.

On a very personal note it struck me that I will most likely need to find a new European glitter supplier (rather than the wonderful Flint’s just off the Walworth Road in south London) to avoid very complicated and time consuming paperwork and tax declarations. And that I might also be forced to stop working with my friends David and Lucy for my website – which will be a very sad day indeed.

Hopefully some of my anxieties will be allayed over the coming months. No matter what happens having Sweden citizenship will enable me to vote in general elections – which considering that this is where I live, work, and pay my taxes makes good sense!

And now … it is time to go and do something practical – what a perfect way to spend the later half of a Friday afternoon!